Having shown my DT&I gondola with a pipe load, in my post about the model displays at “Prototype Rails” in Cocoa Beach two weeks ago (available at: http://modelingthesp.blogspot.com/2012/01/cocoa-beach-meeting-comments.html ), I have received two email messages asking about pipe loads. This post explores what’s involved and how I build the models.
The rules for open-car loading are remarkably complete and detailed (issued at regular intervals by, successively, MCB, ARA and AAR, in the form of books), and though identified as “standard practice,” can be seen in a fair number of photographs to have been followed incompletely. Still, I would suggest that in general, using the loading rules is a good start for modeling open-car loads.
Where can one find these rules? Original Loading Rules books of various ages can often be found for sale at railroadiana or swap meets, usually 5 x 7.5 inches with paper covers. Another useful source is the issue of Railway Prototype Cyclopedia (no. 20) with an article on open-top loads. It is only about flat cars, but many of the rules are very similar for gondolas.
Here is an instructive transition-era photo (a B&O publicity shot, taken in the marine terminal at Locust Point [Baltimore], Maryland, with ships in the background), showing several gondolas with pipe loads, variously secured. 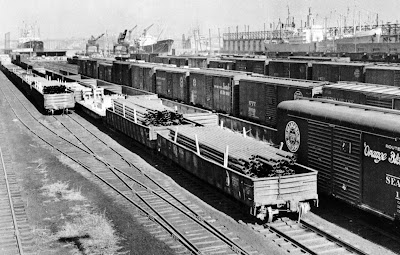 Most of these cars have three pairs of side stakes, but some follow the loading rule for pipe longer than 20 feet and have four pairs of stakes. Most if not all pairs of stakes appear to be secured to each other across the top of the pipe cargo, using wire. These loads extend above the gondola sides.
What are the rules for this kind of load? Reproduced below are two figures from a pre-World War II AAR Loading Rules book, showing the main features. You can see that it largely corresponds to the loads in the photo above. First, a side and top view of the load. 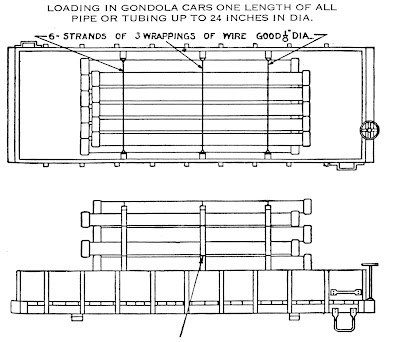 For completeness, here is an end view (but notice the exceptions): 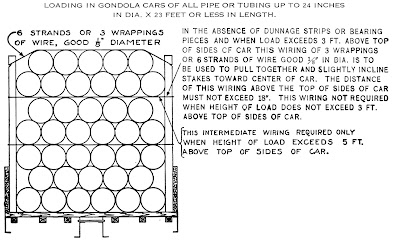 I usually make loads much less tall than the end-view drawing above, so don’t need the intermediate “bearing pieces” or wire ties shown.
To model smaller-diameter pipe of the kind shown in the B&O photo above, the kind of coffee stirrers found in many coffee shops and cafes are very suitable for HO scale pipe. They are less prevalent out there than formerly but can still be found. This photo shows their appearance and relative size.

I glue them into stacks with model airplane canopy cement (from my stash of R/C-56), then spray paint them with grimy black or a comparable color. No need for all pipes in your load to be full length, as the ones in the interior of the load cannot be seen. The bottom of one of my loads looks like this:

For this load, I used three sets of stakes and tied them together with smaller stripwood across the top of the load. Wood ties like this were permitted, though wire was more common. I have a wire-secured load somewhere, if I can find it. Here is a top view of the load just shown:

I use essentially the same process for large pipe. The “big” straws provided at a variety of fast-food outlets are similar and lend themselves well to this use. Here is an example made from McDonalds’ straws, seen from the bottom. (When my kids were small, we sometimes ended up at McDonalds and it was an opportunity to scrounge straws. But all the burger chains and other outlets provide this size of straw.)

For this load, I simply used spacer stakes, not tied together across the top, as this load sits mostly below the sides of my gondolas. It is black rather than the “grimy black” of the load of small pipe. Like the other load, it is sized to drop into a 40-foot gondola. If some of your gondolas are narrower than others, the loads need to be identified on the bottom as to which cars they will fit.

Although I haven’t said so above, and I suppose it’s pretty obvious, these are removable loads, as are nearly all my open-car loads. That means, of course, the needed car weight has to be contained in the car itself, not in the load, and thus cars can be run empty just as well as loaded. If you use waybills for loads like this, the car needs to run half its cycle empty! I’m not willing to glue in loads, and then “pretend that car is empty” in operations.
These loads are quick and easy to make, and the price is certainly right. I like to run gondolas with loads at least half the time, so it looks like they have a purpose on the railroad! Pipe is a good example. If you haven’t made any loads like this, give them a try.
Tony Thompson
Posted by Tony Thompson at 10:35 AM