The 2010 “Shake ’n’ Take” modeling project at the Prototype Rails meeting in Cocoa Beach, Florida, was a 40-foot Detroit, Toledo & Ironton gondola. It was designed as a kitbash from the Athearn (nominal) 50-foot gondola, and John Engstrom of Athearn arranged the donation of the kits to be used as starting points for the project. Other contributors included Ted Culotta of Speedwitch, who donated the resin drop ends, and Tom Madden, who produced them; Jim Singer of 5th Ave. Car Shops, who arranged for the custom decals; and Brian Leppert of Tahoe Model Works, who donated the double-truss side frames for the car trucks.
This project actually had its inception in a Richard Hendrickson article, published years ago in Prototype Modeler (November-December issue, 1982, pages 12-16), and Richard guided Greg Martin in preparing the instructions for the “Shake ’n’ Take” project. With Greg’s permission, I have posted a PDF of the project instructions on Google Docs. Here is the link:

The basic process is to shorten the Athearn model by cutting and removing a piece in the car center, two side panels long, and re-attaching the remaining pieces, with corresponding underframe modifications; and replacement of the Athearn fixed ends with drop ends and making corresponding changes in the end framing. I stripped off the paint of the donated kit, and worked with the bare plastic body.
I began with the body shortening, a similar process to which I had done years ago, following Richard’s articles on lengthening the Athearn car from its stock length of 48+ scale feet, for several longer prototypes. I like to add reinforcing strips to the new joint, inside the side sill, as is visible in the photo below. I cut the Athearn weight to fit the new car length, removing about 3/4-inch in the middle, and likewise cutting that amount from the Athearn underframe. As Greg points out in the kit instructions, we don’t know for sure what kind of center sill these cars had, and I chose to simply retain the Athearn fishbelly design, though it may not be correct for this car.
Here is a view of the underbody at this point, with the car reduced to 41 feet long. The saw cut where material was removed from the underframe is visible, as is model putty on the side joint. The reinforcement strip is white, and the gap where the steel weight was cut is the shiny line to the left of the car center. The couplers are just a trial installation.

The floor was smoothed, since a wood floor will be inserted. Ends were sawed out, then cleaned up like this:

According to Greg’s directions, new end frames were fabricated from styrene, and looked like this:

But at this point, I realized that Greg’s procedure would result in an end frame which was too thick, if I followed his method of adding scale 4 x 4-inch styrene to the back of these frames. I also was not happy with the depth and shape of the end sill in these new parts. So I narrowed the upright portions, cut them off flush with the bottom of the “U” shape, and glued the four “post pieces” to the car ends, making them flush with the car side (a photo of this is further along).
I then added the styrene 4 x 4, but flush with the car end surface, and when the glue was dry, shaped them with files and sandpaper to the desired shape. The net result is an end frame which looks like the prototype thickness and shape, and is not, to my eye, over-thick. This prototype photo from Richard Hendrickson’s collection is a good end view (and nicely shows the hand brake support arrangement also), clearly showing the shape of the end frame. You can click on the image to enlarge it. 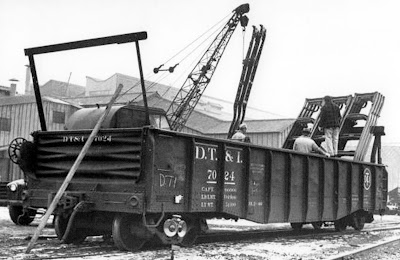 Here is how the A end of my model looked with the revised construction: 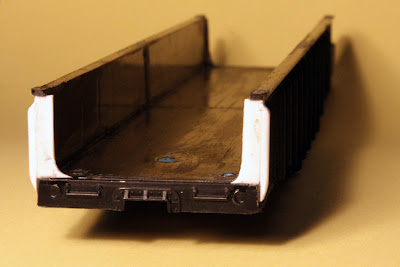 Further work was straightforward detailing for the most part, and I simply followed Greg’s directions. For sill steps, I used A-Line Style B, which, though not exactly like the prototype, do have a similar look. In mounting these, I used the same trick with 4 x 4 styrene blocks behind the side sill as in my M&StL box car project (see the description of this sill step procedure at: http://modelingthesp.blogspot.com/2011/12/modeling-project-m-box-car.html ).
Other details included A-Line drop grab irons and an InterMountain Ajax hand brake and a retainer valve (from their 1937 AAR box car detail set). I applied Archer rivets to the end frames, rather than apply individual rivets as Greg did.
The resin drop ends, as mentioned above, were part of the kit. The ends were added after gluing in the “wood” floor (Evergreen no. 3047, called “Passenger Car Siding.” (In HO scale, it corresponds to the commonly-used 5-1/2-inch board width for gondola wood floors). On other projects, I have represented wood floors with a wider spacing by using Evergreen no. 2067 (“Freight Car Siding”), which is 0.020-inch thickness, a little easier to work with than the 0.030-inch thickness of Evergreen no. 3047.
I installed the Tahoe Model Works trucks which were provided with the kit, the double-truss AAR design, and added Reboxx 0.088-inch wheel treads and 1.010-inch axles.
Since I didn’t have an interest in an auto-frame load for this car, I consulted the January 1953 issue of the Official Railway Equipment Register and found that 30 of DT&I’s gondolas of this body style were not equipped with auto frame racks at this time, and I chose one of the listed car numbers among those 30 for my model. Here is the completed car, after airbrushing, lettering with the decals provided, and weathering with acrylic washes.

The drop ends of this car are eye-catching, as they are correctly ribbed with the major corrugations convex toward the car interior, as on the prototype. Here is an end view to show both ends, along with the wood floor, posed at the Shumala depot.

This completes an interesting project on which I carried out a few tasks that weren’t familiar, thus hopefully expanding my capabilities. This is one of the attractions of activities like the “Shake ’n’ Take” projects, along with, of course, the opportunity to make a distinctive and useful freight car for the fleet. My thanks again to Greg Martin for sustaining this activity at “Prototype Rails” in Cocoa Beach.
Tony Thompson
Posted by Tony Thompson at 10:03 AM