At the meeting in Lisle, Illinois last October, I was intrigued by a clinic given by Clark Propst, entitled “M&StL Freight Cars You Should Build.” Though this railroad was not large, it did have a freight car fleet of some size; of greater importance, every model freight car fleet does need a few representatives of “unlikely” railroads (unlikely in the Gilbert-Nelson sense). Whenever samplings of prototype data are done, a few cars always show up from relatively small railroads.
Although none of the car projects Clark presented directly inspired me, I did begin to think that some suitable Minneapolis & St. Louis car might be a good subject. With that thought in the back of my mind, I was browsing in Railroad Prototype Cyclopedia issue 18 awhile back, specifically the article on the ARA 1923 standard box cars. Turns out that the M&StL bought 500 of these cars, their 24000 series (even numbers only). The article includes four prototype photos.
Mental wheels started to turn. I realized that the old Train Miniature single-sheathed box car is somewhat like the single-sheathed ARA car, though details are not up to current standards. Might I have one somewhere in my freight car stash?
Yes, I did. Moreover, it turned out to have some of the features of the M&StL cars. (You always have to check the details of the particular model, because Train Miniature or TM mixed and matched car sides, roofs and ends, sometimes in ways that had no prototype.) Though lettered as a Wellsville, Addison & Galeton (WAG) car, it had wood ends, outside metal roof, and wood doors, all features of the M&StL cars--though the ends weren’t quite right--more on that in a moment. The sides are a Howe truss arrangement instead of the ARA Pratt truss, so the model can only be a stand-in, but would have the right general look. Here is the model out of the box:

The WAG lettering already present, though interesting, would only be correct for cars obtained by the WAG in 1958, well after the time I model, and in any case the WAG cars were plate-end cars purchased from Boston & Maine, and the execution of the TM lettering is poor.
How about decals for M&StL? I always like to be sure I can letter a model before embarking on the construction work. I sent e-mail to Clark to ask where I might get appropriate decals, and he replied that Mark Vaughan offers a set which, though intended for steel cars, could mostly be used for the ARA cars, with different dimensional data. I promptly ordered a decal set, Mark’s set BB. If you’d like to take a look at Mark’s listing, here’s a link: http://wabashcustomdecals.com/shopcustadminlogin.asp .
Meanwhile, I studied the TM kit further. The ends need to have the bracing somewhat like standard ARA bracing, instead of TM’s smooth end. Here’s a drawing of the prototype standard ARA end, an end which most buyers of these cars did not select, but apparently M&StL did: 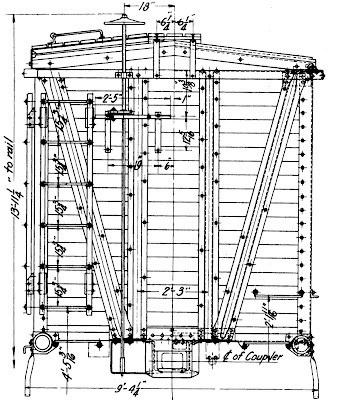 although the M&StL end was not quite like this (more in a moment). The car body in the TM kit has this end:

Not only the incorrect placard board needs to be removed, but also the ladder, as the prototype ladder was outside the diagonal brace. The inset roof end shown in the drawing was apparently not used by M&StL, though it could be simulated with a crosswise brace. I decided to neglect the annoying fact that the ARA-design end had horizontal sheathing boards, and the TM end has vertical ones.
For this kind of work, I like to use an Exacto No. 17 (chisel) blade, to carve off the parts to be removed. I keep the blade under control, so when it cuts through the part it doesn’t skip ahead. After carving off most material, I sand lightly to make sure the surface is level. Then the board divisions are re-scribed through the areas where material was removed. The end then looks like this:

Next the end bracing needs to be added. I used styrene scale 4 x 4-inch strip, which is oversize for the prototype bracing but is a good match for the simulated Z-bar bracing of the TM kit. (Might as well have sides and ends look about the same.)
The styrene strips were sanded to approximate the shape of ARA hat-section braces and cemented to the car ends. I also drilled holes for wire grab irons on the ends, and for two grabs at the left of the sides (the TM model has only one side grab, as is correct for mid-1920s freight cars, but after 1931 two were required, and the second ones were added to older cars when next shopped).
The six-rung ladder for the ends was a minor problem, as none of the commercial ladders I had in my stock had a rung spacing matching the side ladders (normally ladder rungs on sides and ends are equally spaced and located in the same plane). The nearest ladder spacing I had was the InterMountain 1937 AAR box car ladders, which I obtained (along with many other useful parts) in their Body Details set, part no. 40700-59. I cut off the lowest rung and added styrene spacers to permit the ladder to stand off above the end braces (the prototype ladders were arranged the same way). The completed A end looked like this before painting: 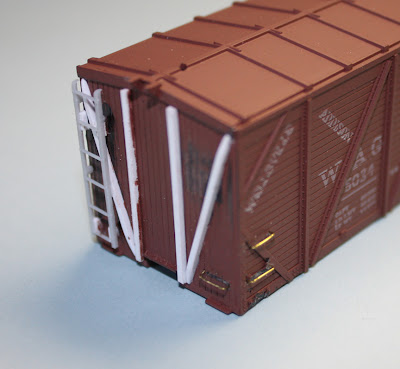 Obviously roof detailing remains to be done in this photo, and I’ve omitted the flanges by which the car’s sheathing was bolted to these end braces.
The door tracks on the TM kit are rather oversize, especially the immense ledge which acts as a lower door track. I removed most of this, as well as the large “claws” on the door, which guide the TM door along the bottom track if it is operated (mine are glued on). The TM doors are intended to represent a bottom-supported door, whereas the M&StL cars had top-hung doors, but I decided not to correct this detail.
The TM running board is seriously over-thick, but can be used if it is filed and sanded down to a realistic thickness. I did that, and replaced the cast-on corner grab irons with Tichy wire parts. I also glued the TM kit weights to the inside of the floor, using canopy cement (R/C-56) and adding about one inch of steel strip at the door location to add a little weight. I cut off the coupler pocket box lids so they would be separate parts, and removable if necessary for coupler maintenance.
Of value beyond this one car project is a trick I often use for addition of metal sill steps. Drilling into the car body itself can be problematic if the shell is thin. So I glue a short length of scale 4 x 4-inch styrene inside the side sill, thus thickening the area where drilling is to be done. Once the cement is well set, I usually drill approximately along the interface between the car shell and the styrene block. Here’s a photo to show how it looks when A-Line Style C steps are attached:

Finally, after painting, applying the Vaughan decals, and weathering the model, here is the final result. I used Tahoe Model Works Buckeye trucks.

At this point a prototype photo may be useful. This one is from the Bob’s Photo collection, and location, date and photographer are unknown.

This project was chosen as another example to show the kind of upgrades and modifications one can perform to get closer to a particular prototype, without any particular goal of creating an “excellent” model. And remember, this model is a stand-in. For me, this will be what I call a “main line” model, normally only used in passing trains, so correcting every detail just isn’t essential. But now I’m glad to have an M&StL freight car in my fleet.
Tony Thompson
Posted by Tony Thompson at 3:14 PM