The terminology of “confiscation” of freight cars, meaning the use of an empty foreign car to be loaded on a particular railroad, rather than being sent homeward empty, sometimes sounds like something illicit is being described. But that’s not true at all; this is simply the term sometimes used.
A problem which can arise in modelers’ waybill systems is a realistic means of arranging for a certain amount of confiscation of empties. The usual prototype cycle, in which a car is unloaded and then sent directly homeward (if there is a direct connection to the owning railroad) or sent off on the reverse route it followed when loaded, is familiar. But obviously the Car Service Rules (which I’ve tried to summarize briefly at: http://modelingthesp.blogspot.com/2012/01/car-service-rules.html ) intend that foreign cars be loaded whenever possible, rather than moved empty, and this is exactly what “confiscation” is all about.
On model railroads, the ease and realism of simulating confiscation of empties which otherwise would be homeward bound will vary with the system of car cards and/or waybills. Here’s why. Any system with a fixed cycle of car movements, such as the traditional four-cycle waybill, directs unloaded cars to specific places, such as yards or off-layout destinations, and in the following cycle, the next piece of the paperwork directs the car again to a specific location. Then cars are “never” available empty at most layout locations, because their paperwork always directs them to some other location.
Obviously it is the rigidity of the cycles which is at fault here. One way to break the fixed cycles is if new paperwork is supplied to each car for each operating session; then confiscation is readily accomplished. This can, however, represent an awful lot of paper generation. But most people re-use their paperwork in subsequent sessions. What about those systems? One option is to prepare for the possibility of confiscation at a particular town, by including an additional waybill in the sleeve (if one is used), which can be chosen when desired. But this is not “demand-based” car flow if that choice is arbitrary.
In a layout system with demand-based car flow (this means car flow which derives from industry needs, an idea which I’ve discussed previously; see: http://modelingthesp.blogspot.com/2011/11/operations-demand-based-car-flow.html ), a yardmaster may receive a certain number of waybills (in effect, standing in for Bills of Lading), and these identify needed empties. The yardmaster or his yard crew can then choose suitable empty cars for these loads, following Car Service Rules if desired. For this to work, either the four-cycle paperwork needs to have an empty cycle called “available for loading,” or the paperwork needs to be pulled or replaced as needed. I’ll turn to the latter possibility in a moment.
The system I use on my layout, in which all waybills are “one-function” or single-sided bills, makes confiscation easy and natural. Layout resetting between sessions readily provides for confiscation, either directly from industry sidings or from car accumulation points such as yards or interchange tracks. For a summary, see: http://modelingthesp.blogspot.com/2011/10/operations-role-of-agent.html and also the further discussion of the same topic at:  http://modelingthesp.blogspot.com/2011/11/waybills-15-managing-bills.html.
But the problem comes with any system in which car movements are relatively constrained, whether by four or any other number of cycles which repeat, or by having preprinted waybills and Empty Car Bills organized in a sleeve or other system (as I have described for Otis McGee’s layout, at: http://modelingthesp.blogspot.com/2011/07/waybills-9.html ). As mentioned above, it can readily happen that cars are always regarded as having firm destinations. The way to break this pattern is to treat any free-running car with an “empty cycle” as potentially loadable, if the car is suitable for the needed load. Appropriate paperwork can be created to supersede an existing cycle, presumably under the control of a yardmaster or agent at a particular town.
I am in the process of trying two approaches to this. One is to provide blank Empty Car Bills at the yard, so a yardmaster, presented with specific car needs of certain industries, can handwrite a fresh Bill to move a suitable car to that industry, if it is already empty and moving on a prior Empty Car Bill. This new Empty Car Bill would be placed atop the existing Empty bill in the sleeve. 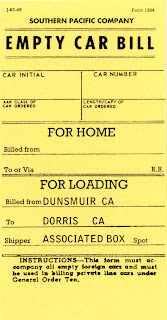 Filling out part or all of such a bill by hand is prototypical; several several examples I’ve seen of actual Empty Car Bills are indeed written out in pencil, as in this instance (click to enlarge):

However, unless these new Empty Bills are regarded as disposable, waybills will build up in some car sleeves. Moreover, additional load waybills have to be provided also.
The second approach is to prepare “overlay bills” for industries which typically need cars, in the case of Otis McGee’s layout, flat cars for lumber mills. I’ve discussed overlay bills before (see for example: http://modelingthesp.blogspot.com/2011/08/waybills-10.html ), both for empty and loaded movement, and these would be available at the yard (Dunsmuir on Otis’s layout). A rule for use of such overlay bills is probably needed. For Otis’s layout, this might be something like “all empty flat cars destined Eugene or beyond can be confiscated if needed.” So a yardmaster with overlay bills on hand, representing industry needs, would then seek the appropriate cars subject to confiscation, and add the short bills.
Here are examples of both the Empty Car Bills and waybills, in full-length and short (overlay) form. When the short bill is placed atop the long bill in the car sleeve and aligned, it looks like a single bill. First, the overlay Empty bill which preempts the long Empty bill: Next, for the following session, the overlay waybill which supersedes the existing waybill for this car (both overlay bills would be put in the sleeve): 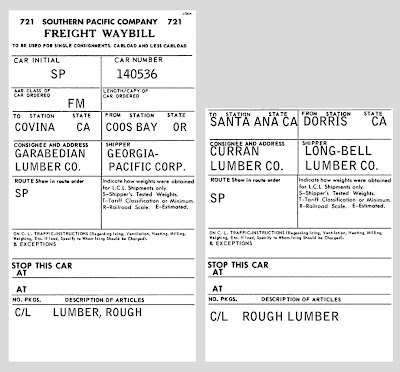 Once the car has been loaded and moved to westward staging (Redding), the overlay bills would be removed and returned to storage at Dunsmuir yard. I lean toward this second approach, but will try both.
This handling of empty cars to be loaded may not be an important feature of too many layouts, but when it is, a realistic means of accomplishing it seems to me to be essential.
Tony Thompson
Posted by Tony Thompson at 2:42 PM