I’ve been asked to say a bit more about prototype information resources for waybill information. I will list the primary sources I have found valuable, and for items which are less widely known, will also show photos of them.
The first area of interest to many is to understand what the prototype did in the creation and handling of waybills. There are a number of valuable, published documents which set this out clearly. Here are two:
John H. Armstrong, The Railroad: What It Is, What It Does
(Revised Edition), Simmons-Boardman, Omaha, 1982.
Lawrence W. Sagle, Freight Cars Rolling, Simmons-Boardman,
New York, 1960.
Both of these are informative and helpful, and do spell out the basics of waybills, though neither one contains extensive detail.
But most important in this regard (to me, anyway) is a book which is exactly about freight car movement, and which I cannot recommend too highly. It is:
E.W. Coughlin, Freight Car Distribution and Car Handling in the
United States, Car Service Division, Association of American
Railroads, Washington, 1956.
This book is often available on-line from used book dealers, typically for $10 to $20, though you may need to check regularly with booksellers like AbeBooks (http://www.abebooks.com/) or Powell’s Books (http://www.powells.com/) to find a copy. Here is a photo of my copy:

A summary of the information in these resources seemed like a good idea to me, so I wrote one, and it was published in 2010. Unfortunately, a few things got messed up in the production process. In an earlier post, I presented a corrected version of my article in The Dispatcher’s Office (OpSIG magazine), available as a document on Google Docs through this link: http://modelingthesp.blogspot.com/2011/01/waybills-2.html
When it comes to what information is shown in waybills, a collection of prototype paperwork would be most valuable, but few of us have much in this line, particularly since we most want to find documents for both our modeled area and our time period. I have managed to find a few from at least the right era, thanks to the generosity of friends and acquaintances. This example was sent to me by Chet French, former railroad employee, and illustrates several points often made about waybills. 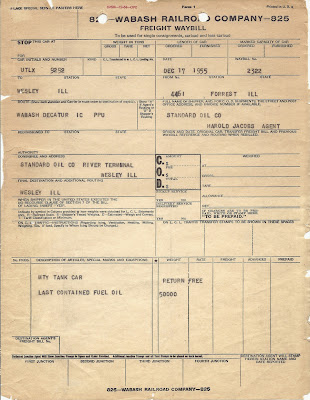 The car here is a UTLX tank car, and is being returned empty, with its former load (fuel oil) identified for safety reasons. Note it is to be interchanged from the Wabash to the Illinois Central at Decatur, on its way back to Standard Oil at Wesley, Illinois, on the Peoria & Pekin Union (shown as PPU).
I have offered further discussion of these and other aspects of waybill content, and presented them in a previous post, at the following link: http://modelingthesp.blogspot.com/2011/09/content-of-waybills.html . That post was followed up with additional information about what is contained within a waybill, in this post: http://modelingthesp.blogspot.com/2011/10/content-of-waybills-2.html .
But there were rules about how this was done, and there were also tariff publications, giving both some of those rules, as well as a great many details of tariff categories and rates. Jerry Stewart, former car clerk, says that a typical clerk's office would have a long shelf or shelves, with something like six linear feet of tariff publications and approved routing books. None of us want to go that far, but I have found it interesting to browse the 8th Uniform Freight Classification guide that I have. It’s a big book; here’s what it looks like. 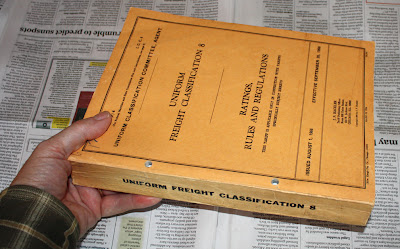 Inside are endless tables and little else, but these are the actual, legal tariff categories of cargoes. With this, one can choose appropriate tariff descriptions to the degree that one may wish. Here is a tiny slice of the contents (you can click to enlarge the image): 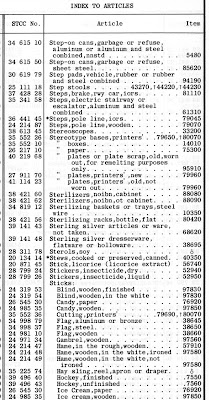 Whether this is of direct use, or if you just use it to browse for terminology, it at least has the strength of complete authenticity (as one of my friends said, “yes, but not in a good way”), and it’s a personal choice whether you like this kind of thing or not.
Another book which I have found of value is this one:
Railway Accounting Rules, Accounting Division, Association of
American Railroads, Washington, 1950. [numerous editions]
Yeah, I know what you’re thinking, “that’s the very last thing I want to model,” and I understand, because it was my first thought also. But after Guy Wilber encouraged me to get one of these, and I found a 1950 edition from an on-line used book dealer (Powell’s), I was sold. It contains terrific information and has copies of all the standard AAR waybills, including livestock, perishables, LCL, and others. Virtually all railroads used the AAR forms verbatim, so each railroad’s form was completely standard. This is my copy of the book:

I have mentioned “Shipper’s Guides” in previous posts. These are railroad-issued documents, listing all on-line shippers and receivers, and are obviously superb resources. They tend to be hard to find, even at railroad museums,but Ted Schnepf’s “Rails Unlimited” operation has reproduced a number of them and has them for sale. Here is a link to Ted’s page for these particular documents: http://railsunlimited.ribbonrail.com/Books/shippers.html .
Here is a photo of one of the guides I purchased, extremely complete for Union Pacific though unfortunately for 1938 instead of the 1950s, as I would prefer. It is a great resource.

As I have mentioned previously, there is a fine database of shippers and receivers on-line from the Operations SIG (the Industry Database is at: http://www.opsig.org/reso/inddb/), but be careful, as it is for a wide range of eras and is in general less complete than a Shipper’s Guide.
These are a few of the prototype information resources I rely on, with some of the lesser-known ones illustrated. I hope this will be helpful to those searching out this type of information.
Tony Thompson
Posted by Tony Thompson at 11:06 AM