I was asked awhile back if any of my model freight cars were “stand-in” versions, meaning, I suppose, models that were not really correct but at least “in the ballpark.” I replied, “Absolutely.” There are just too many desirable objectives and too few convenient routes to model them. And I should emphasize “convenient” here, because sometimes a stand-in is just a labor-saving approach, on a prototype you aren’t terribly serious about.

I am, I like to think, a reasonably serious modeler for several prototypes, notably most Southern Pacific equipment (but an exception is included below), Pacific Fruit Express, and a few other railroads that have caught my fancy over the years. But filling out a freight car fleet now numbering in the several hundreds, I cannot be and have not been meticulous about everything. Some projects are stand-ins.

Last year, I wrote a blog post about such a project, beginning with an old C&BT Shops box car kit that I wanted to re-detail and use for something “interesting.” As I described at some length in that post, I chose the Atlantic & Danville (see that post here: https://modelingthesp.blogspot.com/2021/08/a-c-shops-box-car-part-2.html ). And here’s a prototype photo (Jim Seagrave collection) from the 2100-series of these box cars.

And here’s how that model turned out, using a nice set of K4 decals to letter it as A&D 2173. The model is spotted at an industry in my layout town of Ballard. Superficially similar to the prototype, entirely different in lots of details, and that’s a classic example of a stand-in. 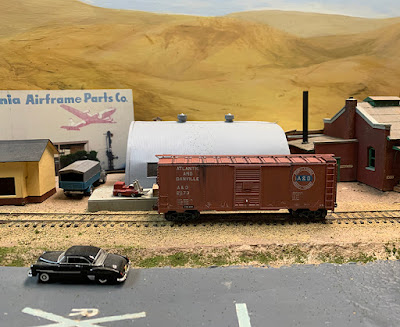 Another example is a Rock Island stock car, a stand-in for which I assembled from an Accurail stock car. Turns out the prototype Rock Island cars were a lot different from the Accurail model; they had four-panel Pratt truss sides, not the six-panel Howe truss sides of the Accurail version. But I intended to use the car in passing trains, where ordinarily spectators are not counting side panels, so I decided to go ahead. Here is the prototype (photo provide by Steve Hile, but I can’t find the source from which he got the photo):

My version, decal lettered as RI 75119, is shown below in a lightly-weathered state that will likely get more intense next time I do a batch of car weathering, shown being switched at my layout town of Shumala. (You can click on the image to enlarge it if you wish.)

In the photo above, note also the SP gondola. It’s lettered as SP 161035, a member of SP Class G-50-25. The model was built following an article by the late Bruce Petty, using a Mantua high-side gondola as a starting point. Problem is, the Mantua model is a ten-rib car, while the prototype, as you see below (Paul Dunn photo), was an eleven-rib car, and a number of other details are different also. (Ignore the post-1956 car number and lettering on the car below.) But now I do have one of these moderately distinctive SP gondolas among a lot of commercial models of other classes.

Bottom line? Sure, my fleet contains stand-ins, most of them deliberately built as such, along with a few that I found out later weren’t accurate after all, and just turned out to be stand-ins. Now sometimes a model turns out to be totally bogus (most manufacturers have no shame, as is well documented), and those baddies do tend to be re-sold or given away.