Last spring, I showed the model work behind re-detailing a box car from C&BT Shops. The idea was to take advantage of an excellent car body molding, and eliminate the unfortunately sub-par detail parts supplied in the C&BT Shops kit. I showed all my changes. You can read that post here: https://modelingthesp.blogspot.com/2021/04/redetailing-c-shops-box-car.html .

Next came a choice of prototype for which to letter the car. The C&BT Shops model is a post-WW II box car, with an early Improved Dreadnaught end and a straight-panel roof, placing it in the range of built dates between 1944 and 1949. It also has the then-common 6-foot corrugated door. I decided to use it as a stand-in for cars of that general ancestry.

My goal was to fulfill the description I offered in a previous post, that even though small or unusual railroads might singly be all but invisible in the national car fleet, collectively they do add up to something more significant. That means we should have some such cars, whatever they are. I laid out that argument in this post: https://modelingthesp.blogspot.com/2021/05/the-unusual-cars-on-your-freight-roster.html .

For this car’s prototype, I chose the Atlantic and Danville Railway, an east-west railroad across the southern edge of Virginia, from their headquarters at Norfolk to Danville, with about 200 miles of line. The choice was partly because a friend had told me that K4 Decals had a nice set for this railroad. (You can see their extensive line of decals here: https://k4decals.com/ .)

For more about the railroad, I show below the A&D Railway page from the Official Guide of the Railways, issue for January 1953. You can see immediately that the railway actually had a quite accurate name: from the Atlantic to Danville. I show the entire page, page 559, only so that you see the emblem in the lower right corner. 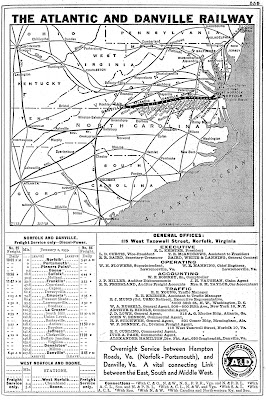 This page illustrates a further point I will make in passing. The Official Guide can give you information about smaller railroads that you will not readily find anywhere else. These books were at one time monthly and were published in very large print runs, so they can usually be purchased from on-line and other sellers. And as the above example shows, they are definitely not only about passenger schedules, though many railfans and modelers perceive them that way.

I can illustrate the paint scheme as shown on the photo below (photo courtesy Jim Seagrave). This is a much older car than the C&BT Shops model, having been built in 1927, but it clearly illustrates what I want to show.  And note the reweigh date, which is February 1956. I don’t know the age of the paint scheme, but this is the same emblem you see in the A&D page from the Official Guide, above.

I used K4 set ADB for this, which is intended for the 2200-series cars, though I am confident that they were not yet on the railroad in my modeling year of 1953. So I chose a 2100-series number, even though it’s not the right body. Yep, it’s a stand-in, acceptable to me in part because it’s not a well-known railroad.

These K4 decals are nicely printed and go on well. I recommend them. I did need to add a reweigh date, but otherwise what you see below is the decal set as provided, with an overcoat of flat finish. The model still rests on its “interim truck support blocks.” (These support blocks were described in an earlier post, at: http://modelingthesp.blogspot.com/2014/11/interim-truck-support-blocks.html .)

Completing the car will only require some weathering, which is not important to the present narrative. This car will definitely fulfill its role on my layout as a member of the “unusual railroad” car fleet, individually insignificant but collectively visible. Of course, like other “fun” categories of rolling stock, this one does require self-control.