In the late 1980s, a new manufacturer of HO scale freight cars emerged onto the scene, called C&BT Shops. The models were produced from all-new tooling, and many of the car bodies were very well done.

However, as I know from having lived in Pittsburgh at the time, and being acquainted with Dick Schweiger, the proprietor of C&BT Shops, there was a problem: molds for the detail parts sprues hadn’t been made before the original toolmaker passed away. The unfortunate result was good car bodies but very poor detail parts, created by a replacement toolmaker of distinctly less skill.

It occurs to me that there must be modelers today who have never seen a C&BT kit. I show below one of the original kit boxes, which also serves to illustrate the era when C&BT Shops came onto the scene. The maroon and gray colors were very fashionable in the early 1990s, and the elegant “look” of the box was a considerable contrast to the ubiquitous kit boxes of the day from Athearn or Model Die Casting. 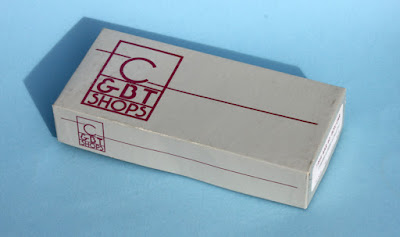 At one point early in C&BT’s existence, Dick Schweiger gave me some discarded car bodies, surplus because they had been used to try out some variations in pad printing of lettering. Dick gave them to me rather than throwing them away, because I said I could use them as fodder for kit conversions. The body I am working on at the moment had smeared lettering on one side.

The core idea of any project to “rescue” these good C&BT car bodies, in essence, is to firmly propel all the kit detail parts into the wastebasket, and replace them with a variety of superior detail parts available today. In my case, I didn’t even have to discard any parts, because all I had was the donated car body. But I did make the same kind of fresh start, adding all new detail parts.

My first step was to fill all the attachment holes, intended for ladders and grab irons, with modeling putty (I use Tamiya gray). Then I added wire grab irons from Westerfield, and decent-looking ladders from my parts box (not sure of the origin). Here is the car, on “interim truck support blocks,” with its overly-heavy New York Central lettering, which I won’t retain. 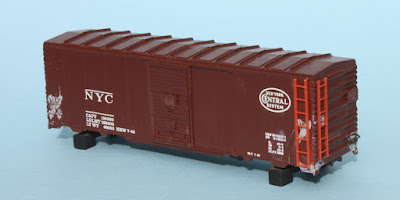 Next came sill steps, and brake gear on the B end of the car. I used A-Line “Style A” sill steps, and some AB handbrake parts from the parts box. With all side and end details complete, I added a representation of a metal grid running board from Kadee, part 2001, attached with canopy glue, and was then ready for paint.

First, I lightly primed sides and ends with Tamiya Fine Surface Primer, a nearly white color, to neutralize the existing lettering. It’s not necessary to make the color entirely uniform, only to lessen the contrast between body color and lettering. 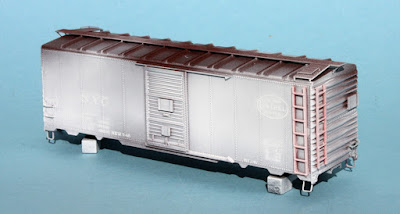 Then I chose the Oxide Red color of Tamiya Fine Surface Primer as a body color. This paint has good covering power, so can easily color the entire car uniformly. It also has a light gloss, suitably for many decals.

This completes the modelling work on this project. I think it is evident on this car body what superior detail and proportions it has, things that are easier to see when the original kit’s clunky details are replaced. I have not decided which of several pending decal applications I want to use on this car, but it is ready for the next step. I’ll choose trucks to match the prototype being decaled.