A common load in gondolas in any era would be railroad ties. Particularly in the wood-tie era, tie replacement was necessarily a continuous process, and might be going on anywhere, any time, on the railroad, and ties needed to be taken to those areas. A couple of years ago, I wrote a blog post about tie loads, which is at this link: https://modelingthesp.blogspot.com/2019/02/open-car-loads-ties-in-gondolas.html . The load I built, that was shown in that post, was a partial load, suggesting that ties were delivered to at least two locations.

(Incidentally, I have written an entire series of post about open-car loads, for both flat cars and gondolas, and you can most easily find them by using “open car loads” as the search term in the search box at right.)

The diagram I showed for ties in gondolas, taken from the 1926 ARA Loading Rules book, was shown in the previous post cited in the top paragraph, above; for simplicity, I repeat it below. 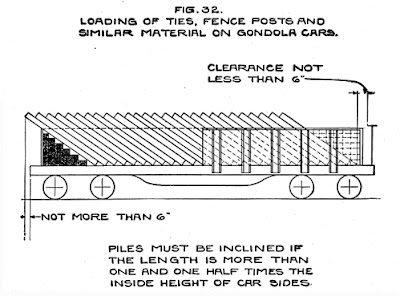 Now a model load of the kind shown in the above diagram could be assembled in a gondola with all loose ties, just like the prototype. But even the lightest bump of the model gondola can disarray the ties. You can doubtless guess how I know this. So at least some of them need to be glued.

For the present post, I set out to build a full load. The first step was the stack of ties, shown in black at the left in the above diagram, which is “6 x 6” (six ties wide and six ties high). I assembled this stack with canopy glue, using some Model Hobbies ties I had on hand. I also assembled a couple of rows of ties, nine ties wide, with canopy glue. You could of course keep on making rows like this until you fill the car.

But if you do it that way, you not only have a whole bunch of gluing to do, you also permanently consume ties. It struck me that there is an alternative: I tried just taping a couple of rows with Scotch tape. The tape, of course, would be hidden between the row of ties inside the car, and the ties would be easily recoverable by removing the tape.

Placing the tie rows, and the end pile, in a car body reveals that although HO scale gondolas vary in width, even the more narrow ones do accept the standard 9-foot tie. Here is the beginning of stacking these “sheets” of ties in a gondola. One feature I like about the taped sheets is that if one looks a little too irregular, or not irregular enough, just peel off the tape, re-position, and re-tape.

Although your stack of the sheets of ties may not come out exactly to reach perfectly to the end of the car interior, you can lightly jiggle the tie sheets and get the last row to sit right at the car end. 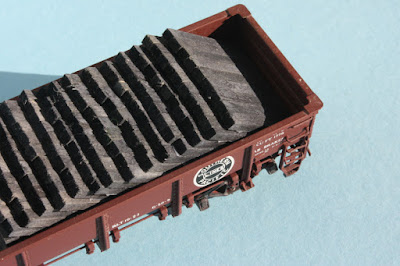 A load of ties like this, or even a half-load, as I have previously described, makes an interesting car in a mainline train, and of course can be waybilled to any layout location where a track foreman might get a fresh stock of ties. This could be almost any siding or spur, or if you have one, a work area or outfit track. Mine are already in use.

Posted by Tony Thompson at 9:20 AM