A number of my model sleepers, both heavyweight and lightweight, are stock or modified AHM (Associated Hobby Manufacturers) plastic cars, manufactured by Rivarossi. In the latter part of the 20th century, these were ubiquitous in hobby shops and swap meets, and can be modified beyond their original form.

Earlier parts of my series of blog posts on SP passenger cars showed my conversions of some of the heavyweight Pullman  cars to various different floor plans (the easiest way to find all of the series is to use “modeling SP passenger” as the search term in the search box at right).

An important part of these conversions is couplers. Although I body-mount couplers on shorter cars, on 80-foot cars there can be problems on curves sharper than about 36 inch radius. My solution has been to modify the original AHM Talgo-like arrangement. I mentioned this briefly in one prior post (see it at this link: https://modelingthesp.blogspot.com/2014/09/modeling-sp-passenger-cars-sleepers.html ), but want to expand on that description here.

The photo below shows the sequence. At left is the truck as produced by AHM, with a long, spring-loaded tongue, terminating in a molded-in-place horn-hook coupler.  I simply cut off the horn-hook coupler, then drill and tap the tongue for a 2-56 screw, as shown at center. Then a regular Kadee coupler box is attached on top of the tongue, using a screw, right. I continue to use Kadee #5 couplers on passenger cars because of their wider gathering range, though nearly all of the rest of my rolling stock is being converted to Kadee #58 couplers. 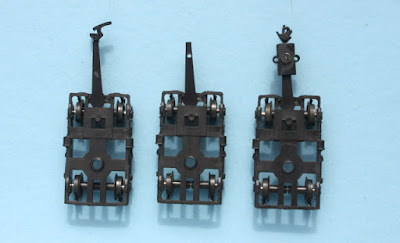 The trucks shown above happen to be 4-wheel trucks, but of course the exact same process is used with 6-wheel trucks. Shown below is one truck of each type, drilled and tapped. The length of the tongues appears different at first glance, but in fact, the distance from bolster center to the drilled hole is the same for both trucks. 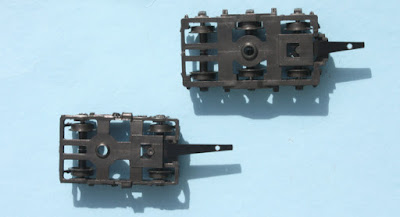 An advantage of this kind of mounting for couplers is that they are then located just about ideally at the car end. Shown below is a car end without diaphragms, so the coupler can be clearly seen.  The car here is a Lark sleeper.

Another issue with the Rivarossi design is that trucks are attached with friction pins. This works all right when the models are new, but after a few truck removals and replacements, for painting, maintenance or whatever, the pins are no longer doing their job very well. The simple solution that I’ve used is to drill out the body bolster hole with a No. 30 drill, insert 1/8-inch Evergreen styrene tubing and glue with Plastruct “Plastic Weld,” and then tap the inside of the tube for a 2-56 screw. Then it looks like this:

I have several of these 10-6 sleepers, reasonable stand-ins for Southern Pacific’s post-war Pullman-Standard sleepers, assigned to several trains, including the Coasdt Route’s Lark. I will say more about the paint and lettering, and my layout uses of the cars, in a future post.

Posted by Tony Thompson at 1:44 PM