Many readers will know that the Mobil Oil Company, as it was later known, was an outgrowth of the breakup of Standard Oil in 1911. The oil products parts of Standard became regional oil companies (sometimes called “Baby Standards”) and various other parts of the huge company also became independent entities. One of the Baby Standards was Standard Oil Company of New York, with the acronym Socony. As the name says, this was an eastern United States regional company.

But with time the various regional companies began to pursue their own interests as needed, often overlapping into each others’ territory. They also absorbed other oil companies over the years. Socony was no exception. In 1931, they merged with the Vacuum Oil Company (so named for a refining technology) to form Socony-Vacuum.

Socony had been marketing gasoline and petroleum products under the name “Mobil” since 1920, and continued after the merger.  In fact, the company was to be re-named “Socony-Mobil Oil Company” in 1955, but that’s after my 1953 modeling date. The use of the “flying red horse” as a trademark, begun in the 1920s, continued for many years.

But how does California come into this? Wasn’t Socony, as its name implies, an Eastern company? In fact, Socony, in various guises, operated in many parts of the United States, including a refinery at Torrance California, near Los Angeles. Built by Vacuum Oil in 1907 and operated by them until the merger with Socony, the refinery continued under Socony-Mobil, under Mobil Oil Corp. when that name change occurred in 1966, and then by Exxon when it merged with Mobil in the 1990s, and still operates today, though no longer under the Exxon name.

(Incidentally, as I have pointed out in previous blog posts, the history of all California oil refineries is conveniently available, in a fine web page at: https://www.energy.ca.gov/data-reports/energy-almanac/californias-petroleum-market/californias-oil-refineries/california-oil .  Comparable refinery histories are available on-line for other regions of the U.S. and for particular states.)

At one time, the tank cars of Socony-Vacuum were assigned to particular divisions. In 1940, for example, the White Eagle Oil Division (a predecessor) had the WEOX mark, while the White Star Refining-Ohio Division cars were marked WSRX. By 1946, those older marks were discontinued, and cars were listed as “Eastern Region, Socony” and carried the reporting mark SVOX. By the 1950s, cars were listed under “Central Region,” headquartered in Kansas City, and with reporting marks SVX.  Cars of course were operated throughout the country as needed.

Given the refinery and the many Mobil gas stations in Southern California, I can certainly operate Socony-Vacuum tank cars on my layout, and indeed I have two.  One of them models the famous all-red scheme with the large “Mobilgas” lettering. Here is a prototype photo, taken in Los Angeles in the late 1950s (after the reporting mark change to SMX for Socony-Mobil), from the Bruce Petty collection. You have to love the spillage below the dome! 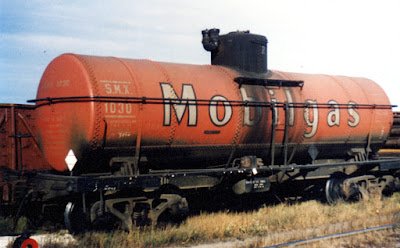 This scheme has been possible in HO scale for some time, both in factory paint and in decal form. Here is the model I have, inherited from Richard Hendrickson’s fleet. Note that it is a brighter red, not the faded-to-orange of the prototype photo above. 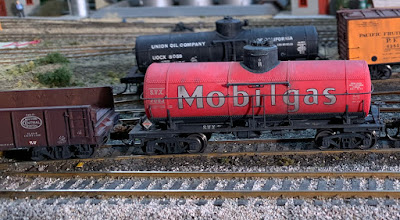 I also have a second Mobil tank car, this one in an earlier “Mobilgas” scheme, and it is a brass car from Precision Scale. It does have a problem, in that the reporting marks applied by the factory are SOVX, a reporting mark that never existed, as far as I can determine. (You can click on the image to enlarge it, if you wish.) 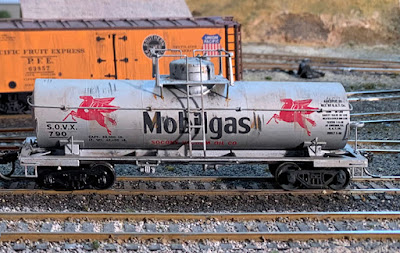 There was at one time a SVOX mark, for Socony-Vacuum Oil, but not SOVX. Moreover, the SVOX mark was replaced before 1950 by SVX. The solution, then, was simple: a paint patch to shorten the reporting marks.

This Precision Scale car is interesting in that it is an insulated and jacketed car, and has the kind of dome-top fixtures used for some chemical commodities. Although I don’t know the full range of products that were made at the Torrance refinery, several simple chemicals are certainly possible, and I will likely make waybills for this car accordingly.

Mobil petroleum products, and the “flying red horse” logo on service stations, were very familiar on the West Coast in the 1950s, my modeling era, so I am happy to operate both these cars on my layout.

Posted by Tony Thompson at 8:03 AM