In several previous posts in my series about prototype waybills, I have pointed out the way many railroads indicated the results of weighing a car on a scale. The scale mechanism printed out a slip with the gross weight on it, the scale operator wrote down the light weight of the car (stenciled on the car side), and subtracted the light weight from the gross to obtain the cargo weight. The slip was then pasted onto the waybill.

I thought it would be interesting to explore making versions of such slips for model waybills. The simplest way is simply to select a weight slip from a prototype waybills, adjust and copy it, size it to fit whatever model format you use, and paste in place. You can of course play with the weight numbers too if desired.

I will illustrate with part of a Southern Pacific waybill from the Andy Laurent collection. Here is just the part with the scale slip, for a load in Rock Island car 21433, a 40-foot steel box car with 10 ft., 6 in. inside height. 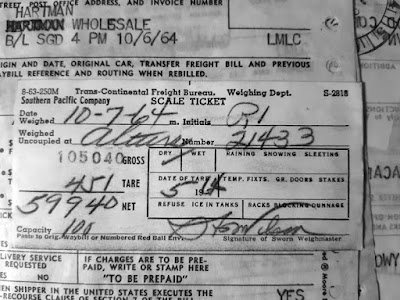 The first task, as I mentioned, is to improve the contrast of the digital image and cut out the slip from the background. This provides the slip by itself, still in the form of a Photoshop tiff.

I decided I would remove some of the writing on the slip, so as to have a nearly blank one that could be adjusted for various scale locations, dates, and different cars being weighed. I also modified the numbers at the extreme upper left of the ticket, which are the date of adoption of an SP document, followed by the amount printed in units of a thousand (M). You can click on the image to enlarge it, if you wish.

With this adjustment, the slip can now be sized for a particular model waybill. For example, it would work well on the “half-page” 5 x 7-inch bills used on Paul Weiss’s Central Vermont layout. Like all the waybills I make, they are tiffs. Here is the nearly blank scale slip, applied to a Southern Pacific waybill of this size, inbound to the CV. 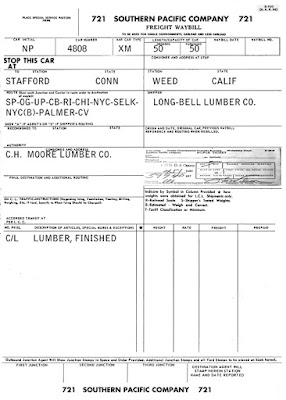 When the waybill with this addition is printed out, it can be handwritten to fill in the missing info in the scale slip. Additional notations are also included, of the kind commonly seen on prototype waybills. 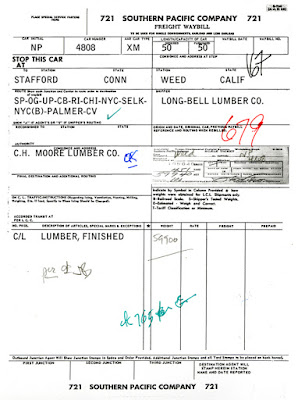 Whether adding scale weigh slips will appeal to many, or even be practical for many modelers’ waybill forms, seems unlikely in most cases. But the process described above does show one way to include these interesting (and entirely common on the prototype) features of a waybill.