As you can readily tell from the title of this post, identifying it as the 78th post on a single topic, I have been writing extensively over the years about waybills and all their ramifications and implications for use in model railroading. You can readily find a list of the previous posts in the series by using “waybills, part” as the search term in the search box at right.

My subject in the present post is an interesting detail on prototype waybills, the identification of a loaded car’s weight. This may happen in a number of ways, as I detail below, but it’s important to remember that even though tariffs were all on the basis of weight (with a partial exception which I mention below), most cars were not weighed on a railroad scale.

The primary reason the railroad didn’t need to weigh a car is because of weight agreements. A shipper might have an approved and licensed scale, so that items placed into a railroad car  could be weighed before placement, and the total added up; or the cargo loaded could comprise identical manufactured products, such as step ladders — just count the ladders and multiply by the unit weight — with some allowance for dunnage.

These agreements are usually indicated on a waybill with a stamp giving the issuing authority (a regional Weighing and Inspection Bureau, or WIB) and the agreement number. I’ve written about model versions of these stamps (see that post at this link: https://modelingthesp.blogspot.com/2020/10/waybills-part-73-creating-rubber-stamps.html ). An example of a waybill with such a stamp is below (from the Andy Laurent collection), the round stamp halfway down the right edge. 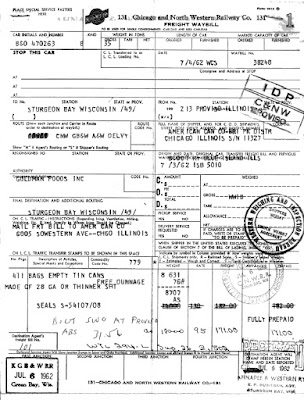 But not all cars have their loaded weights determined this way. Many cars were in fact weighed on railroad scales. Usually that was shown on the waybill with a copy of the weight slip from the scale pasted right onto the waybill. An example of such a slip is shown below (a scale at Cedar Lake Yard on the CNW), again courtesy Andy Laurent.

The gross weight appears to have been printed out by the scale equipment, though the tare or light weight must have been entered by the scale operator. This kind of form can readily be made into a blank for use on model waybills, as was done for weight agreement stamps.

But sometimes the relevant weights were all typed onto the waybill, evidently at West Yard on the LS&I, for a load of lumber. Note the allowance for dunnage (stakes) and the weight agreement stamp for the LS&I scale. 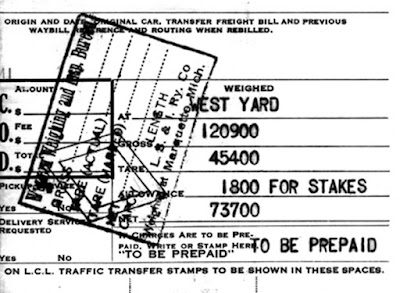 These kinds of weight data presentations can be quite obvious on waybills, such as the Canadian National perishable bill (yes, it's on the AAR-recommended pink paper), shown below — again, Laurent collection. The weight slip at middle right appears to be a carbon copy, with the original presumably preserved at the scale location. This bill is for a cargo of blueberries from Chicoutimi, Quebec, to Sturgeon Bay, Wisconsin. 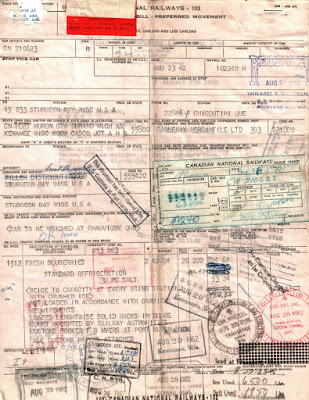 Model waybills need not look like the example above to be fully realistic, but this example does show that prototype waybills, by the time they reached their destination, were far from pristine.

I mentioned that there is a significant exception to this focus on weights. It is tank car cargoes. They rely on gallonage, and the “shell full” gallonage, which is stenciled on the ends of the car, is the amount when the horizontal cylinder of the tank is just full, easily observed from the manway during filling. But the actual tariff is by weight. Each kind of cargo has a conversion factor, such as 5.64 pounds per gallon, and the weight is then calculated to the nearest hundred pounds. But the car is not normally weighed, nor in many cases is its light weight even shown on the car.

I continue to explore ways to make model waybills look more like the prototype ones, at least for inbound loads that have passed through many yard offices on their way to destination. Weight data are just one part of that.