As the long and difficult year of 2020 came to a close, we celebrated it (in part) in our family with a relatives-only operating session. Once again, our granddaughter was visiting for the week between Christmas and New Year, so we operated. This was my layout session 58, and it took place in the layout town of Ballard.

As she had done previously, my wife Mary acted as conductor for this session, and organized all the work, according to the waybills provided, and the agent’s message on spotting of empty cars. (Awhile back, I wrote a post about how I have used of agent’s messages in operating sessions; it can be found here: https://modelingthesp.blogspot.com/2015/06/operating-with-agent-messages.html )

In the photo below, Mary holds such a message, while at left, the engineer is consulting the pack of waybills for the arriving train. You can see a number of waybills tilted up alongside the car they accompany. (This is okay while setting up the session, but I prefer that waybills not be on the layout once operation begins.)

Once the work had gotten organized, switching began. In the photo below, Mary is behind the engineer, who is backing today’s power for the branch train, SP 2829, into the Western Packing spur to pick up some refrigerator cars that have been loaded. Waybills  being worked are lined up in the “J strip” on the fascia, left foreground. For anyone not familiar with these strips, I’ve written a post on the subject. You can find it at this link: https://modelingthesp.blogspot.com/2018/09/j-strips-for-waybills.html . 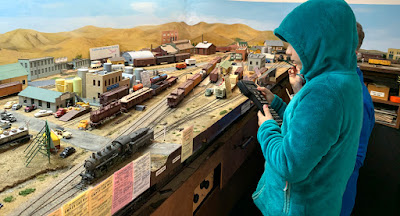 With the work well underway, one spot that was made was an Anchor Petroleum tank car to the Standard Oil of California spot, as you see below. This is one of the newest paint schemes released by Tangent Scale Models, and the car is newly introduced into the freight car fleet. (This car is also visible in the train shown in the first photo, above.) Behind the spotted car is the tankage of Ballard’s Union Oil bulk dealer, and a Union tank car is spotted on the parallel spur that serves that dealer. 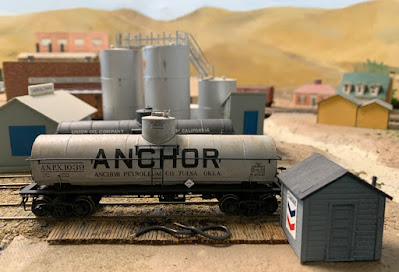 As work progressed, the experienced crew made very few extra moves. In the photo below, switching is nearly complete and the engineer is preparing to finish the work and reassemble the train for departure back to Shumala. She is very careful and skillful with the NCE throttle, and could provide guidance to some of the more energetic engineers that have operated here over the years. 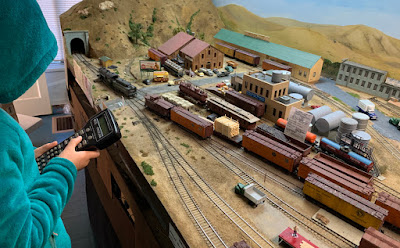 This was a good session, enjoyed by the crew and carried out quite smoothly. It has certainly been fun to be able to operate at least a little bit during 2020’s long shut-down of normal activities, and I’m grateful that some of my family wanted to do these sessions.