In a series of posts, I have been describing a number of 1990s freight cars to which I have applied different kinds of graffiti. To find previous posts, you can use “freight car graffiti” as the search term in the search box at right. It might also be of interest to look at my article in Model Railroad Hobbyist (MRH), in the issue for January 2020 (you can visit their website at: www.mrhmag.com ), in which I discussed the topic more generally.

In the present post, I want to describe the same kind of work on two more 60-foot box cars to extend this series. This follows on to a previous post about the same kinds of cars, and takes a broadly similar approach (see that post at this link: https://modelingthesp.blogspot.com/2020/12/freight-car-graffiti-part-17-60-foot.html ).

The first car I will talk about here is a Santa Fe double-door waffle-side car, ATSF 37545, shown below as it came to me (with only the very lightest weathering by its owner, Seth Neumann).

I began with this car by applying some graffiti decals, though not excessively large ones; my observation of prototype waffle-side cars is that they must be a challenge for the “artists” to paint and thus don’t get as heavily marked. (The models are similarly more effort to decal.) On the left side, as you see below, I applied graffiti from Microscale set 87-1533 and 87-243, then weathered the car and added some tags.

On the right side, I again chose a medium-size graffiti piece, this one from Blair Line set 2262, along with the usual weathering and tags.

Finally, as this car has a painted roof rather than the usual unpainted galvanized roof, I decided to depict some paint failure, with corresponding exposed galvanized surface, using gray paint. Then I added the beginning of rusting in those areas (you can click on the image to enlarge it if you wish). 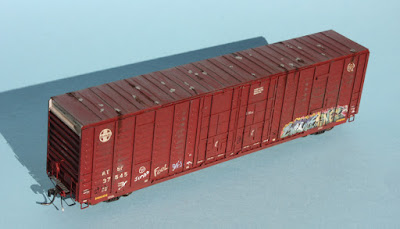 The second car I want to present is a car from the Railbox family. Railbox was always a subsidiary of Trailer Train, which gradually built more and more of these free-running box cars. The “TBOX” reporting mark was introduced in 2003, and is thus mildly anachronistic on Seth’s 1996 layout, but when well dirtied, will not call attention to itself. (If TTX history is of interest, I recommend their own website, at: https://www.ttx.com/about/our-history/ ). Here is the car in its original appearance.

My approach here was to add graffiti, and to plan on somewhat heavy weathering. The left side of the car was given graffiti from Microscale sets 1523 and 1533, as you see below, along with weathering and tags.

For the right side of the car, I used Microscale set 87-1533 and a smaller T2 decal, following as usual by a protective coat of flat finish, acrylic-wash weathering, and tags.

These two cars have been interesting additions to the weathering and graffiti applications I have been developing. I think these will be sound additions to Neumann’s freight car fleet.