In a long series of posts, mostly from last spring, I showed application of various sorts of graffiti to a variety of freight cars, mostly the modern fleet of my friend Seth Neumann, whose layout is set in 1996. Many of the cars shown in the earlier series were cement cars, or sand and gravel hoppers (see for example the last previous post: https://modelingthesp.blogspot.com/2020/06/freight-graffiti-part-16-granite-rock.html ). For others in the series, just use “freight car graffiti” as the search term in the search box at right.

Many of those posts showed the use of commercial decals for graffiti sources, but I included additional material on using paper overlays, and for tagging. The fundamentals of these applications stem from my article in Model Railroad Hobbyist, in the issue for January 2020, and summarized in a blog post (see it at: https://modelingthesp.blogspot.com/2020/01/freight-car-graffiti-part-2.html ).

For the present post, I will begin with one of the typical 60-foot cars of this type. Below I show one of Seth’s models, with a haze of weathering on it. This is the kind of car I am addressing in the present blog.

For these cars, I wanted a moderate amount of side weathering, but with real rust and dirt on the roofs, and perhaps a single graffiti piece on each side. My authority for graffiti appearance, and in fact for copying of actual graffiti images, is the book, Freight Train Graffiti, by Roger Gastman, Darin Rowland and Ian Sattler (Abrams Books, New York 2006).

I will also add, as I’ve said several times, you may hate or love graffiti on freight cars, your call of course, but any time after the mid-1980s, they are simply reality. Modeling without them speaks for itself.

To begin, I worked on a Cotton Belt car like the above image, though with a different car number. For this car, on the left side, I used Microscale decal set 87-1523, as you see below. The car has also been weathered after decal application.

Then on the right side, I used Microscale 87-1534 and 1535. On both sides of this car, I used a fine-tip felt pen to add some tags. For the subject of tagging, by the way, I  wrote an entire post to cover this sub-set of the graffiti world (see it at: https://modelingthesp.blogspot.com/2020/04/freight-car-graffiti-part-11-tagging.html ). I will say more about roof treatments below.

The other car I want to present is the same car body as the model above, but lettered for Missouri Pacific. The left side of this car used Microscale 87-1535, and some small decals from Microscale 87-243. Here again, the model as you see it here has been weathered after decaling. Tags were also added, which you may see better if you click on the image to enlarge it.

On the right side of this car, I used decals from Microscale sets 87-1534 and 1535. This photo shows a little of the roof treatment also. Note that the decals have settled down nicely over the ribs.

Finally, since I have been mentioning roof treatments, shown below are the same two cars just presented, seen from above, with their X-panel roofs dirtied and with some patches of rust added. The upper roof in this view is the MP car just discussed; the lower one is the Cotton Belt car shown earlier in this post. In the more modern era of these cars, heavy deposits of soot on roofs were largely absent, compared to the transition era, but rust failure, incipient or widespread, was and is common on galvanized roof sheets. 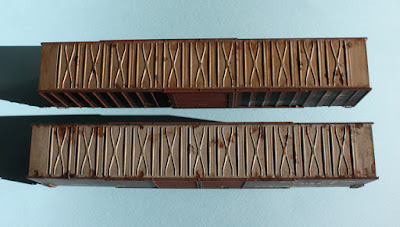 These two cars are the beginning of a larger group of cars of the same type, to which I will return in future posts. These two, however, do show the basic approach I am using.