Tenth anniversary of this blog!

Every year on December 8th, I write a kind of summary post about the history and status of the blog, because the first post to it was on December 8, 2010. That makes this the tenth anniversary! as amazing to me as it no doubt is to many others, including those who told me I wouldn’t last out the first year.

I continue to be as surprised by the size of the audience as I have been since the start. During the first three years, page views grew steadily, reaching an annual rate of about 160,000 per year. For the last six years or so, viewership has been steady at more than 200,000 views per year. The total page views since I started is now just over 1,750,000 views, a staggering number to me.

I have also been intrigued by the commentary. The total number of posts to the blog is now about 1250, and there have been more than 2000 comments posted. As has been true for some time, there are even more questions and other communications that come to me separately from the blog, usually by email. That’s fine, and I answer them all (unless it’s just a passing comment instead of a question).

I often reiterate, in these annual “anniversary” posts, that the title of the blog, “Modeling the SP,” certainly describes what I would state as my hobby goal. But many, many posts are not directly about Southern Pacific topics. I am sometimes asked, “what’s up with that?” My response is, modeling any railroad requires knowing about, and modeling, many other railroads’ equipment, and knowing about prototype railroad operations generally. Narrowly focusing on the SP would be misleading.

In that vein, I often include a favorite photo in these anniversary posts, and will again today. This one dates from about 1940, and shows an SP brakeman passing signals. I don’t know the original source, but it came to me from Clark Bauer’s collection. It does depict the work of the railroad being done, which is what I want to capture in my layout, especially in operating sessions. 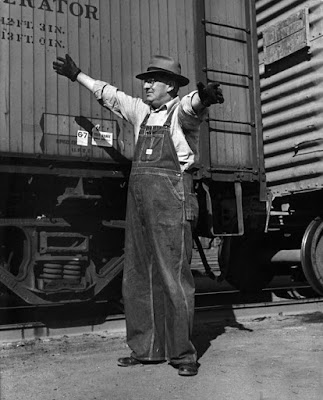 For reasons I don’t know, some particular posts have held sway as the most viewed of all these 1250 posts. Undoubtedly number one is a post from back in 2013, still getting views, about canopy glue. It describes its uses and benefits, and it’s a glue I still use it for many things in the hobby. But the post keeps ticking along. If you’re interested, here is a link to that post: https://modelingthesp.blogspot.com/2013/05/a-few-words-in-praise-of-canopy-glue.html .

Number two in all-time popularity is another post on a topic I thought a minor one: duckboards. These are wooden walkways to keep people’s feet out of the mud or oil or whatever. This post continues to get views, many of them from overseas viewers, so I have wondered if this translates into something else in other languages. But here is a link if you’d like to look: https://modelingthesp.blogspot.com/2015/08/duckboards.html .

Another very early post (back in 2013) that remains very popular, I can understand better, because it describes a modeling detail that I have not seen described very often. That is the modeling of open ice hatches on refrigerator cars. It’s usually about fourth in all-time popularity, and it can be found at this link: https://modelingthesp.blogspot.com/2013/07/modeling-open-ice-hatches-on.html .

The last one I’ll mention is an “in memoriam” post I wrote about my good friend Richard Hendrickson after he passed away in June 2014. He died suddenly, and it was a real blow to me, making it fairly hard to sit down and write about him. But I often cite this post when his name comes up in email lists or elsewhere, and he was very well known in his life, so I can understand the extensive views the post still receives. It is at this link: https://modelingthesp.blogspot.com/2014/07/in-memoriam-richard-hendrickson.html .

Incidentally, in the years following Richard’s passing, I gave short talks about him to a few model railroad meetings, and included photos not used in the post just cited above. So I decided to write a further appreciation of him, including some of those additional photos along with more about his life. That follow-up post is at: https://modelingthesp.blogspot.com/2018/06/further-appreciation-of-richard.html .

With that, I’ll bring this commentary to a close. Surprised as I am to have continued for ten years of writing this blog, I guess I’m equally surprised to find I’m neither tired of it, nor thinking of stopping. I continue to enjoy sharing hobby projects and insights, and continuing to think that others can benefit from reading them.