In the previous post in this series, I introduced the wagon-top box cars (or “round roof” cars, as they are sometimes termed) of the Pennsylvania Railroad.  By the early 1950s, they comprised the second largest group of PRR box cars, after the immense Class X29 fleet. And like the X29, they were a very distinctive design, and indeed can be called a signature car. That post is here: https://modelingthesp.blogspot.com/2020/11/pennsy-freight-cars-part-5-round-roof.html .

Over the years, there have been a variety of models available for these cars. One might begin with the Athearn metal models of both 40-ft. and 50-ft. cars. These were pretty decent models, having separate ladders and grabs, and accurate bodies. As an example (I don’t own a PRR version), here is the 50-ft. car in DT&I paint. This is an X32A design. (The DT&I was one of several railroads that purchased cars of this design new.)

There once was a Roundhouse styrene version, about which the less said the better. There has for some years been a Bowser “shake the box” molded styrene version, not bad-looking overall but with cast-on details (the separate running board molding is excellent, though). In decorated form, the model has lettering that is not terribly well rendered. Of course the details can be upgraded and proper lettering, such as the decals available from Speedwitch or Middle Division, applied to these cars. Here’s an example, Bowser’s Class X31A, using Speedwitch set D122. 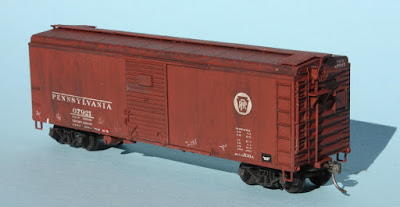 There have been a variety of resin kits produced in HO scale, from West Shore Line and Sunshine. These can sometimes be found for sale on eBay and other on-line sources.

In HO scale brass, there have been several different versions imported (notably by W&R Enterprises), though these tend to be costly and hard to find. Below is a photo of the W&R model, Class X31B, as painted and heavily weathered by Richard Hendrickson. In a nice detail added by Richard, note that the car, originally equipped with automobile racks and thus with a white stripe painted on the right-hand door, has been taken out of that service and the stripe painted over.

There was once a somewhat simplified model of an X31C imported by Nickel Plate Products, and I recently posted descriptions of my work restoring one of those (see the post at: https://modelingthesp.blogspot.com/2020/12/restoring-old-brass-car-part-2.html ). One more example: Railworks some years ago imported a brass model of Class X32A. Though not a great model, it certainly captures all the main features.

But the big news these days is that Rapido Trains is close to releasing what should be a superb model of the most dominant variation numerically, the X31A single-door car. (They are also doing double-door X31s.) You can visit their website for updates on progress with this model (the page is at: https://rapidotrains.com/products/ho-scale/freight-cars/ho-scale-prr-x31a-boxcar#prettyPhoto ). I don’t know if it’s official, but it’s being said that these will cost $49.95, U.S.  Below is one of their photos of a pilot model, with the inset roof feature quite visible. 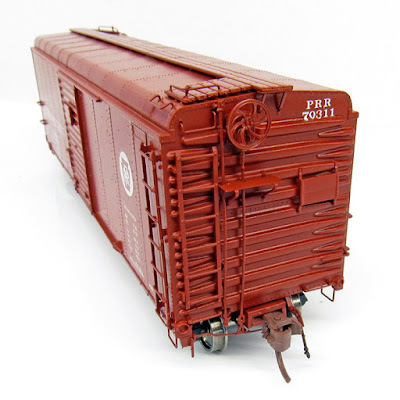 The wagon-top cars are really “signature” freight cars of the Pennsylvania Railroad, and deserve inclusion in any model freight car fleet from the 1930s to the 1960s. They were numerous cars and, especially the single-door box car sub-classes, went everywhere.Like the X29, they were ubiquitous in North American railroading, and should be in your fleet, too.