In the first post in this series, I showed how the Pennsylvania Railroad’s car fleet was the largest in the United States, even without its very numerous hopper cars. This is the basis for the statement that every freight car modeler, if aiming at reality, must also be a Pennsy modeler. You can view that post at this link: https://modelingthesp.blogspot.com/2020/11/modeling-pennsy-freight-cars.html .

That first post also showed some photographs of by far the largest class of PRR box cars, X29, and the following post took up the topic of modeling those essential cars. I included photos of several of my own X29 models. That post is here: https://modelingthesp.blogspot.com/2020/11/pennsy-freight-cars-part-2-modeling-x29.html  .

I might also mention that in one of my articles about “signature freight cars” for various railroads, published in the Model Railroad Hobbyist issue for March 2015, I naturally included the X29. (That issue is still available, free, to read on-line or download, at their website, www.mrhmag.com .) That article also showed models of PRR wagon-top box cars. (Incidentally, the term “wagon-top” was used in Pennsy documents and is not, as occasionally asserted, a modelers’ term.)

A point worth making is that there exist considerable information about paint and lettering schemes for PRR freight cars generally. A magisterial article by Brady McGuire (The Keystone, magazine of PRRT&HS, Vol. 21, Summer 1988) deserves first mention. Many PRR lettering diagrams have been published in various places, and many are available from PRRT&HS.

It may be true that the signature PRR box car was the X29, but certainly the wagon-top or “round-roof” box cars are also contenders. Some 9000 of these cars, almost all classes X31 and X32, were built in the 1930s. Though not threatening the dominance of X29 in fleet proportions, they were nevertheless a very prominent box car type, particularly by 1955, as you can see in this graph (repeated from the first post in this series, cited at the top of the present post). For much more about these cars, I recommend Patrick Wider’s fine article in Railway Prototype Cyclopedia, Volume 22. 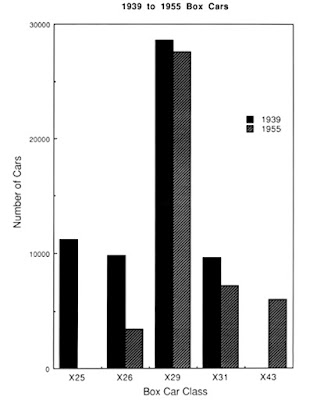 With these wagon-top cars, there is one distinction that is often essential to make: whether or not the roof is “flush,” meaning that the roof contour blends smoothly to the sides, or is “notched” or inset, with a narrow notch between the top of the sides and the edge of the roof. These two end views should clarify what is meant, with the inset roof on the left. 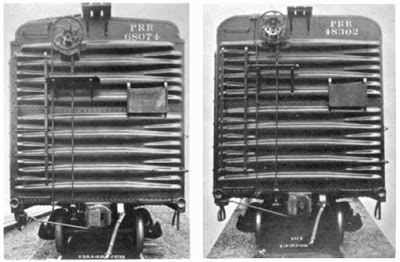 Here’s a detail from a prototype photo that fairly clearly shows the inset roof (Class X31A), taken by Dick Kuelbs at Ft. Worth, Texas on May 6, 1963. The car is in the post-1961 “simplified keystone” scheme. You may also note that the car has patch panels, for the same reason that they were needed on X29 box cars. (You can click on the image to enlarge it if you wish.)

The early 1930s PRR program to build new standard box cars was both for 40-foot cars, like the various X31 sub-classes, and also for a 50-foot design, classes X32 and X33. The only major difference between X32 and X33 was the presence of end doors in the latter class. The 50-foot cars are not included in the graph at the top of the present post; they numbered about 2000 cars.

The 50-foot cars were nearly all sub-classes X32A or X32B, with flush roofs. The distinction between them is that nearly all the X32A cars had a 12-ft., 6-inch door opening, while the X32B cars had 14-ft., 6-inch door opening. This is not a profound difference, only adding a foot to each door, but is visible if photographs are compared. Below is an example of Class X32A (PRR photo, author’s collection).

Next below is a view of an X32B car (Chet McCoid photo, Bob’s Photo collection, taken in October 1951 at Hamlet, North Carolina).

One way to detect this difference in door widths easily is to look at how closely the doors crowd the road name spelled out toward the left end of the car side.

These interesting signature freight cars of the PRR definitely deserve modeling, and I will return to modeling of the wagon-top cars in a future post.

Posted by Tony Thompson at 6:08 PM