I began this series of posts with some general observations about the freight car fleet of the Pennsylvania Railroad, compared to other major railroad car fleets, in 1950. My comparison emphasized the size of all the fleets with hopper cars omitted — because for much of the country, hoppers aren’t very visible in interchange, a point I’ve made elsewhere. (My first PRR post of the present series can be found here: https://modelingthesp.blogspot.com/2020/11/modeling-pennsy-freight-cars.html ).

I mentioned in that first post that a distinguishing feature of the PRR was that it had about equal numbers of box cars, gondolas and  hoppers. The pair of car fleet graphs below show this. The graph on the left is the national car fleet in 1950, and to the right is the PRR fleet in that year. The vertical bars are in the same order by car type in both graphs, but for the present comparison you only need to know that the first three bars are for box cars, hoppers, and gondolas. (You can click on the image to enlarge it if you wish.)

It is evident that the PRR fleet was considerably different from the national average — as is true for almost all railroads, due to traffic differences.

(To be complete, let me add that the national car fleet graph, above at left, is somewhat misleading in that nearly all tank cars, and a substantial number of refrigerator cars, were privately owned, so no railroad could be expected to have a fleet car distribution like the national average. But for the present discussion, about the first three bars at the left of both graphs, that’s not an issue.)

Now let’s look at the gondolas. As with many PRR car groups, the very numerous survivors of car classes built in the 1920s and before largely disappeared after World War II, and newer cars dominated the fleet in turn. In this instance, it is the GR and GS classes, totally dominant in 1939, that were almost entirely replaced by 1955. 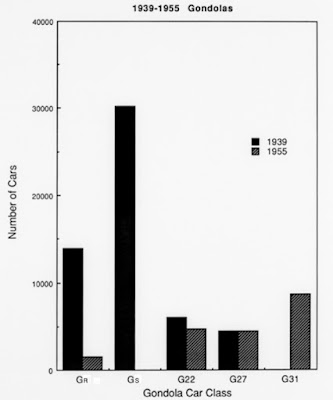 One can readily see from the graph above that postwar gondola modeling should emphasize G22, G27 and G31 classes. In the present post, I only want to address Class G22.

This class, 46 feet long inside, was the first gondola that long in the PRR fleet, and one of the earliest in the United States. Generally similar to its predecessor, Class GS, it had 12 side stakes on account of its length, compared to 10 side stakes on the 38-foot GS cars. Built during 1915–1917, the design was well enough respected to become the basis for the USRA 70-ton gondola. The photo below of PRR 352068 is from the Joe Collias collection, and was taken at East St. Louis in 1939. 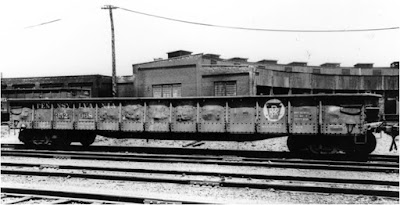 There has long been a very nice Westerfield resin kit for this car in HO scale (kit 1201), and in fact Richard Hendrickson’s review of that kit contains one of the best summaries of prototype information on the car class (Prototype Modeler, Jan.-Feb. 1984, page 42). Shown below is my model of this class, PRR 315287, shown on the Shumala passing siding of Southern Pacific’s Coast Line on my layout. In 1953, the year I model, there were still more than 4200 of these distinctive gondolas in service on the PRR (not counting those modified for container service).

This distinct low-side gondola is an interesting and welcome addition to my freight car fleet. That’s not only because it was a landmark in gondola design history, but also because it models a nationally significant gondola in its sheer numbers.