In a previous post, I compared the freight car fleet of the United States, in the form of the 15 largest railroad car fleets, to the Pennsylvania Railroad (data for 1950). I also showed the size of the major PRR box car classes in 1939 and 1955, showing dramatically how dominant was the X29 class (see that post at: https://modelingthesp.blogspot.com/2020/11/modeling-pennsy-freight-cars.html ).

That previous post also showed some prototype photos of a few of the variations in appearance of the X29 class box cars. In the present post I want to comment on modeling Class X29. The first mass-produced model of this PRR car class was by Train Miniature (TM). Though somewhat crude in its cast-on grabs, ladders and sill steps, it nevertheless captured very well the overall look of this car body, and those details could be replaced.

The more major upgrade needed on the TM model was the underframe. The business plan of TM was to create a 40-foot underframe that could be used under a wide range of freight car models, and accordingly they designed it to have a conventional bolster-to-car-end spacing of five and a half scale feet. But the X29 has only a five-foot spacing. It was not difficult to “cut and paste” underframe slices to correct the spacing, though not too many modelers did so. Below is one I did.

Note that this car has the short upper door track and the panel door , but has the low, single door stop.

A far better molding became available from Red Caboose, and before long they added a car body with patch panels. (These panels repaired rusted-out side panels at the bottom.) This was really great, as adding patch panels to the TM body was not trivial. What did these look like on the prototype? Below is a detail from the Wilbur Whittaker 1953 prototype photo shown in the previous post. You can see that the patches are riveted at the side posts, but the seam to the original panel above is welded. 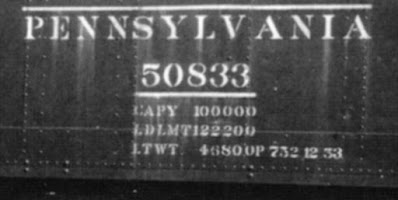 Models, of course, benefit greatly from this detail. The first photo above, of my modified Train Miniature X29, does have partial patch panels, of 0.005-inch styrene sheet; but they are not easy to see on the model. The Red Caboose ones are considerably better. Here is an example of an RC body without patch panels, shown in the consist of the Santa Rosalia Local in my layout town of Ballard. The car has a corrugated door and low, single door stop. 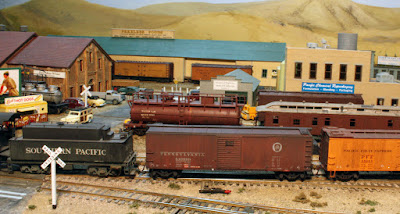 These Pennsy box cars did get awfully dirty in service, and were many years between repaintings. I have tried to capture that look, especially the roofs being dirtier than the sides, as you see above. Note that the route card board is right next to the bottom of the car door.

With patch panels, I have two models, one looking fairly freshly painted. It is in fact an as-decorated Red Caboose kit, with panel door, short upper track, and both door stops.

But nearly all my PRR box cars are well dirtied, as in the example below, spotted at the Martinelli Brothers cannery in my layout town of Santa Rosalia. This one has a panel door. 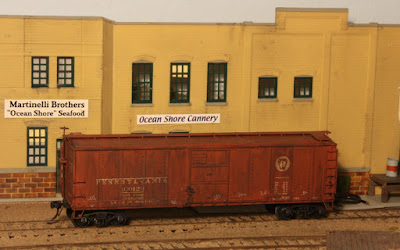 Modeling these cars is relatively easy if the Red Caboose bodies can be found (availability varies). What I have shown above is not all my X29 models, and I don’t think I have even one too many. It’s a rare operating session on my layout when an X29 doesn’t appear somewhere!

In future posts, I will go on to discuss other PRR box cars, as well as other PRR freight cars.