As a continuation of the previous two posts about waybills, parts 75 and 76, which talked about car movements and corresponding waybills when crossing international boundaries, this post is about a special shipment type, “in bond” shipments. In effect, this shipping arrangement moves the border inspection process to another location. It does not change the requirement for a shipment entering the country to be inspected and, if necessary, pay duty, it just changes the location of those events.

{Anyone wishing to read the two previous posts, or for that matter any previous waybill posts, can readily find them by using "waybills, part" as the search term in the search box at right.)

Strictly speaking, a shipment leaving the international border in bond, without customs inspection, remains in the possession of the U.S. government until it can receive its customs inspection and clearance, usually at destination. The most important reason for shipment in bond is to avoid congestion and delay at the border, and sometimes also to arrange consistent inspection to be done by a knowledgeable inspector of a particular kind of cargo.

Needless to say, like any international shipment, movement in bond calls for lots of additional paperwork, and as I have already observed in this connection, there is essentially none of it that we would want or need to reproduce for model railroading. But there is some waybill language that we might like to include.

I will begin by showing a waybill form which exhibits some of the “in bond” shipment complexities. It is from the extensive waybill collection of Andy Laurent. A selection from Andy’s collection. including this one, can be viewed at the following link he supplied: http://www.greenbayroute.com/1962ahwwaybills2.htm . 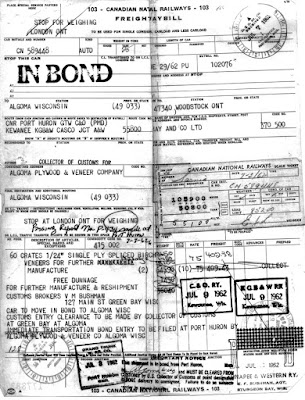 Here we see most prominently a rubber stand designating the “in bond” status, and like the other facsimiles I have made of such stamps, this can be reproduced by simple Photoshop techniques (see my post on the topic, at: https://modelingthesp.blogspot.com/2020/10/waybills-part-73-creating-rubber-stamps.html ). But let us look further.  In the lower part of the waybill is this language:

This describes the arrangements. The customs broker in Green Bay, Wisconsin is identified, and the Collector of Customs at Green Bay will collect whatever duty is to be paid and will issue customs clearance, evidently to happen physically at the destination of Algoma, Wisconsin. Only on completion of these formalities can the cargo be delivered to the consignee. The transportation and entry documents are to be filed by the consignee at the original U.S. entry point, Port Huron, Michigan.

(Reading about all these regulations reminded me of an interesting railroad detail from the excellent book, Last Call, by Daniel Okrent [Scribner, 2010], about the rise and fall of Prohibition. During Prohibition, considerable amounts of whiskey were distilled in Canada and exported to the U.S. Of course, it could not legally enter the U.S., though Canada was happy to accept payment of export duties [Canada did not see U.S. entry as Canada’s problem]. How to circumvent the entry barrier?

(A favorite [illegal] method was to ship the whiskey into the U.S. “in bond” for destinations in Mexico or Cuba. In other words, the car would remain sealed while transiting the U.S. Then local officials in Mexico or Cuba were bribed to stamp false entry certificates, which were in turn provided to U.S. authorities to “prove” delivery abroad. Of course, the whiskey was unloaded at various points in the U.S., and the empty cars forwarded to their waybill destinations. I would assume railroaders cooperated in these activities, perhaps for a share of the cargo.)

My own layout, the locale of which is a rural area of the California coast, is perhaps unlikely to receive shipments in bond. However, I do have a few opportunities. An example is below. There were Collectors of Customs at many cities within the U.S., though I have not been able to find a list for the 1950s. I have assumed that Oakland, California would certainly be such a location, but whether there would be another one closer to my layout’s locale, I don't know. The amount of verbiage about the movement in bond has necessarily had to be reduced on this small waybill form. 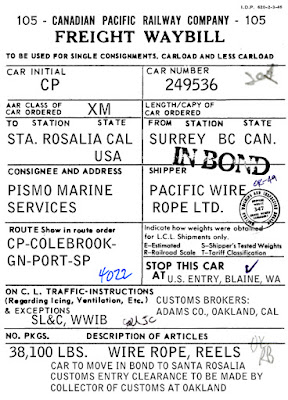 I should emphasize that the various details having to do with “in bond” shipment do not affect how this car would be handled in switching during an operating session. The “in bond” details are what Al Kalmbach rightly called “typographic scenery,” and obviously this may not appeal to lots of modelers. But I have enjoyed learning about this subject, and making a few waybills for future operating sessions.