Real waybills, after moving in transit accompanying the load they describe, accumulate a variety of markings, as I have often pointed out in published articles and in oral presentations. Many of these markings are handwritten by clerks or conductors, but there are also rubber stamps applied to waybills. There are a number of kinds of these, and in this post I want to suggest how one can reproduce them on model waybills.

But first let me show an example. This is a black-and-white image of a Chicago Great Western bill from 1962, courtesy Andy Laurent, The stamps across the bottom of the bill are those of each inter-line junction through which the car passed on its journey. But there are other stamps here too. More on them in a moment. (You can click on the image to enlarge it, if you wish.) 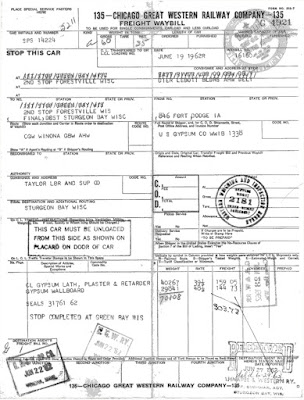 A bill like this can be a starting point to make stamp reproductions. For another good example of a well-traveled waybill, you can visit an earlier blog post of mine, which is at: https://modelingthesp.blogspot.com/2017/02/waybills-part-57-waybills-in-service.html .

An important stamp on the CGW bill above is the round stamp about mid-height on the bill. This is a weight agreement stamp. Around the outside, the legend reads “Western Weighing and Inspection Bureau,” often abbreviated WWIB. My understanding, though not my certain knowledge, is that there were two such bureaus, Western and Eastern. (I don’t know the boundary but might guess Chicago or the Mississipi River.) Loads originating in Western territory would have this stamp, if they had one at all.

What’s a weight agreement? It’s an agreement with the regional WIB, either that the shipper has an accredited scale, or can compute cargo weights by counting items loaded and knowing unit weight. I discussed this at some length in a prior post (see it at: https://modelingthesp.blogspot.com/2016/11/sps-instruction-to-station-agents-part-2.html ). An agent from the WIB would occasionally visit each shipper to check their unit weights and (if any) scales.

How do we make such a stamp for model use? One could of course go to a store that makes rubber stamps and get one made. That would have the advantage that you could use a purple or red or blue ink pad and reproduce yet another feature of real waybills. The disadvantage is that you thus create only a single agreement stamp. Note in the example above that there is a number in the center. That is the number of the individual agreement. We don’t want every stamp with the same number.

Instead, I wanted to make a digital version, so I could add it to my own waybills as part of the image file (all my waybills are tiffs). The way I did this is to take the image you see above of the CGW waybill, and clean up the area of the scan that includes the stamp (that is, erase the non-stamp areas of that image). Here is the result. You will note it is a little ragged in places, which at first I wanted to fix, but then realized, this is just how real, well-used rubber stamps look! 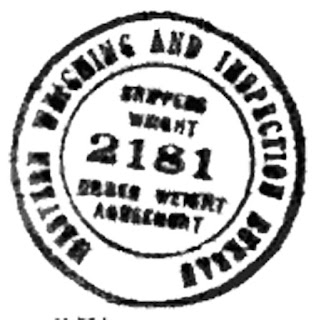 This could also be easily rendered, via Photoshop, in purple or other colors. But by itself this doesn’t work too well, because adding such an image to a waybill will not show the underlying lines or text, as a rubber stamp would. In other words, it’s opaque.

What is needed is to make the stamp image have a transparent background. This is easy to do in Photoshop (I don’t know if it is feasible in Photoshop Elements, because I only have the full version.) This is accomplished in the Layers feature. You need a bottom layer that is empty, then an upper layer that is the stamp image, with the white background deleted. This is easy too, by using Photoshop’s “Magic Wand” tool to select only the black parts of the image (the stamp itself), and deleting everything else, which is the white parts.

Then this two-layer image is saved to maintain transparency, not flattened. Whenever you want to add this image to your new waybill, just copy and paste from the stamp image. You can also readily change out the center numbers, and can rotate the various stamps you make by different amounts, giving them a hand-stamped look. Then you can make waybills like this one: 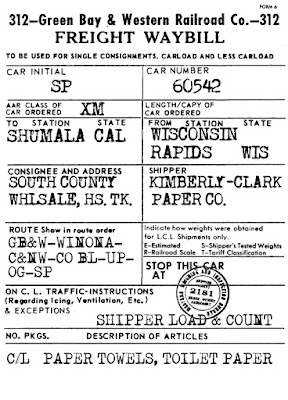 Of course I have also made stamps with other agreement numbers in the center and other WIB legends, but I just wanted to show a single example of the use of the stamp discussed in this post.

Incidentally, those who read this blog frequently will know how it happens that an SP box car is being loaded in Wisconsin, but for any other readers, it’s because that is how the GB&W is supposed to deal with an empty car like this SP car: load it homeward. That’s the Car Service Rules in action.

It has been an interesting challenge to create and use weight agreement stamps for waybills. There are other stamps visible on real waybills, and I want to make some of them too, but that’s a topic for another day.

Posted by Tony Thompson at 9:57 AM