In Part 1 on this topic, I showed the appearance of the SP’s Circular 39-1, issued by the Accounting Department to all agents (you can read that post at this link: http://modelingthesp.blogspot.com/2016/11/sps-instructions-to-station-agents-part.html ). As I indicated in that post, the document does contain a great many items of minuscule detail (perhaps not so minuscule to an accountant), but nevertheless still contains a number of pieces of information which can definitely be used in understanding SP waybill practice.
What has long been an area of interest to me is the entire topic of car weights and weight agreements. Naturally that topic is addressed in the Freight section, Section II, of Circular 39-1. The first four parts of rule 1066 are relevant (you can click on the image to enlarge it): 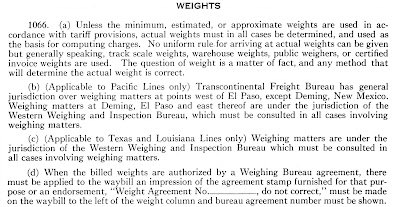 What you see here in rule 1066(a) and (b) explains the use of the abbreviations “TCFB” and “WWIB” in my waybills. I don’t know how many Weighing and Inspection Bureaus (WIB) there may have been in the entire U.S. There was a Southern one (SWIB) headquartered in Atlanta, and I understand there was also an eastern (EWIB) and mid-western (MWIB) in existence, though I don’t know their geographic boundaries. I do know the WWIB was headquartered in Chicago and the TCFB in San Francisco.
I explored the topic of weight agreements in an earlier article in The Dispatcher’s Office, back in April 2010; you can read a corrected version of that article on line, to fix the various errors which crept into the magazine version (it’s available at: http://modelingthesp.blogspot.com/2011/01/waybills-2.html ). I will repeat the gist of it here for convenience.
We are all familiar with the idea that a loaded car is weighed on a scale, and the light weight of the car subtracted from the gross weight to obtain the net weight, which is the weight of the cargo. That can be done on a scale operated by the railroad, or it could be done by a shipper, if the shipper’s scale has been certified by a WIB. Sometimes the weight is only estimated, with the expectation that a scale weight will be determined later (more on the SP rule for that situation, farther down in this post).
But many if not most car weights are determined through weight agreements. These greatly simplify stating a cargo weight. To illustrate how they work, imaging a shipper of floor wax, which ships its wax in gallon bottles. A carton of six of these, with packaging, weighs, let us say, 51 pounds, and obviously will be consistent for every carton. Then the shipper needs only to count the cartons put into the car to know the total loaded weight. If 840 cartons are loaded, the weight is 840 x 51 = 42,840 pounds.
To be able to follow this process, the shipper obtains a weight agreement with the regional WIB, for each kind of container shipped. As shown in the above example, the agreement permits a count of containers loaded, multiplied by unit weight, to determine total cargo weight. This is indicated on the prototype waybill by the presence of the “agreement stamp” of the shipper, which gives the agreement ID number. Rule 1066 (d), above, requires the presence of this stamp, or an equivalent notation.
Following on to the above material from rule 1066, I show below an extract from rule 1068, part (d) only, relating to the direction of cars to be weighed at a subsequent location.

This notation, directing a car to weighed at a nearby location, can readily be added by hand to a waybill. For my layout locale, the nearest scale would be at San Luis Obispo.
While discussing weight agreements, I should mention that the waybill will also normally carry a notation to state the basis for the weight (for example, shipper count). Here is the SP rule, which is  part of rule 1041:

The notation, “shipper’s load, count and weight” can be abbreviated SLC&W, and any part of that might be noted instead, such as SL&C when there is a weight agreement.
These extracts from the very interesting Circular 39-1  document address a number of things I am already doing with my waybills. But there is certainly more material in this document, and I will come back to those additional details from Circular 39-1, in a future post.
Tony Thompson
Posted by Tony Thompson at 11:05 AM