I have often discussed and described railroad-issued Shipper Guides or Shipper Directories in this blog (you can use those names as search terms in the search box to the right of this text to find them). Many of the ones I have previously described are sold as reprints by Ted Schnepf’s Rails Unlimited business (visit the selection at: http://railsunlimited.ribbonrail.com/Books/shippers.html ). In the present post I want to show a guide from another source. It belongs to and is located at the California State Railroad Museum or CSRM. I wrote about CSRM and the library in an earlier post (see it here: http://modelingthesp.blogspot.com/2014/06/visiting-library-california-state.html ).
I don’t recall the cost of this Xerox copy of the original, but it was on the basis of a per-page copying charge. Contacting CSRM by phone or email should yield the cost; the document is 176 pages altogether. Shown below is the front page of the guide, identified as Western Pacific Circular 167-E (and that designation is how you can identify it to order a copy from CSRM). 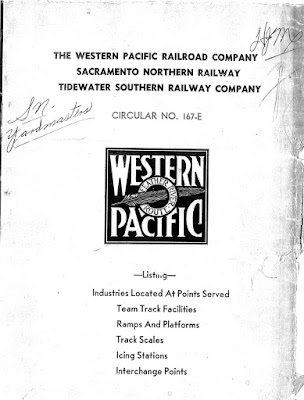 Note that the guide also includes WP subsidiaries Sacramento Northern and Tidewater Southern.
An important part of any guide like this is a key to the abbreviations used. Some may be obvious, but there are usually at least a few obscure ones. Like most guides, this one includes pages to present such a key. Here’s the railroad list, and the beginning of the additional list. 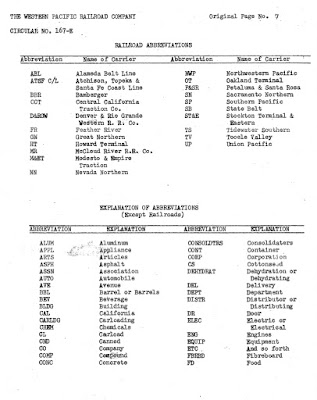 This guide is the best type, in that it shows all accessible businesses for WP, including those accessible via switching agreements, even when the business is located on the tracks of another railroad. I will show just two examples. First, one page for Oakland, California, with numerous SP-located shippers. (You can click on the image to enlarge it.) 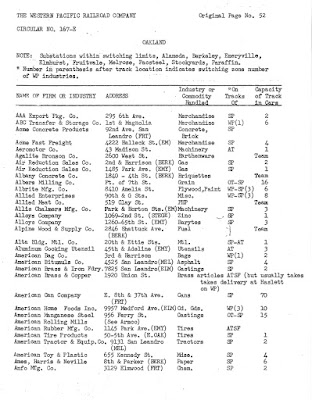 My second example is a page for Salt Lake City, obviously with many railroads identified that are different  from the Oakland page. 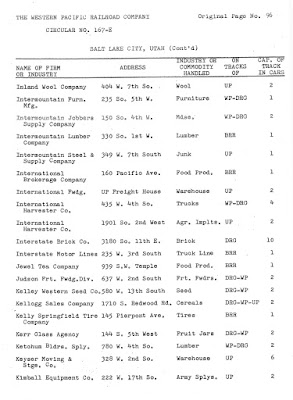 I really enjoy researching both origins of inbound loads to my layout, and destinations for outbound cars. I will just give a single example. The fish cannery on my layout naturally needs to receive empty cans, and the major can companies had plants all over the country to supply such needs. I found in the page shown above that American Can Co. had an Oakland plant, located on SP, so I chose it as a supplier to my cannery: 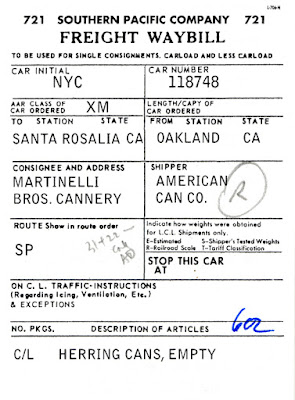 The box car here is a New York Central car, and since it moves within the same District, is not in violation of Car Service Rules to be assigned this way. (I’ve discussed the Car Service Rules in several previous posts; for example, http://modelingthesp.blogspot.com/2012/01/car-service-rules.html .)
This WP document, like many other Shipper Guides, is a great resource if you want to make waybills with prototype shippers and receivers of cargoes, I have already been using it for awhile, and expect to continue to depend on it as a resource.
Tony Thompson
Posted by Tony Thompson at 12:44 PM