I recently posted a description of how I have created images that look like rubber stamps, to apply to waybills. These images were taken from actual prototype waybill scans and converted into Photoshop tiff images with transparent backgrounds, so that they could be added to my waybill tiff images. (That post can be found here: https://modelingthesp.blogspot.com/2020/10/waybills-part-73-creating-rubber-stamps.html .)

The stamp I showed in the post just cited was a weight agreement stamp, for the Western Weighing and Inspection Bureau or WWIB. As I stated in that prior post, I don’t know for sure how many WIBs there were, but have seen stamps for two others: the Eastern WIB and the Central WIB. Here again, I made versions of these from prototype waybill scans by cleaning up the stamp area, then giving them a transparent background.

[As I should have mentioned in the previous post, most of my best waybill scans have come from Andy Laurent’s collection. a selection of which can be viewed at the following link he supplied: http://www.greenbayroute.com/1962ahwwaybills2.htm . Andy has been very generous in sharing his resources, and these are most helpful.]

I show below two of the stamps just mentioned, for the Eastern and Central WIBs. First, the EWIB stamp in its original state, as seen on a Laurent waybill, and as I cleaned it up. As I mentioned before, an image like this is a little ragged, but so are real stamp images. And what you see below is larger than how it will appear on a model waybill.

Next, here is the cleaned-up stamp for CWIB. It evidently wasn’t well inked when applied, so has a somewhat faint look. This is of course perfectly realistic. I should add that an image like this, or any stamp, is easily rotated varying amounts, so that all stamps aren’t aligned exactly alike. 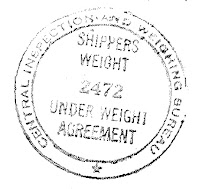 Another stamp of interest is the “Dangerous” stamp applied to tank car and other cargoes that had to be placarded. This stamp on the waybill was presumably intended to give crews that moved such a car additional warning. Again, one of Andy Laurent’s waybills (for a carload of gasoline) contained such a stamp, as you see below. 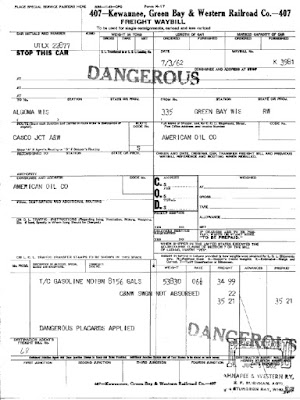 The waybill above is a black and white image. But in fact this stamp was often inked on a red ink pad, so the word should show up in red. In Photoshop, you can just convert the cleaned-up image from grayscale to RGB color and fill the letters with the shade of red you like. Below is an example of this stamp used on a waybill for a model carload of gasoline. 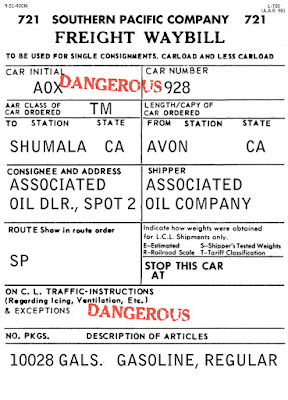 Finally, I wanted to include a Customs stamp, for any load that enters the U.S. en route to my layout, from either Canada or Mexico. Such waybills are not always so stamped, but some certainly were, so I wanted one of those stamps too. I didn’t have to create it, as a Canadian modeler supplied one. I will have further comments about the use of such stamps in a future post.

Creating these various stamps for use in layout operation has been fun, and they will definitely add to the visual quality I am trying to achieve with my model waybills. I will come back to the uses of some of these stamps in a subsequent post or two.