A recent post of  mine was on the topic of ice refrigerator cars, and how ice service was handled, at least in the case of Pacific Fruit Express, with which I’m familiar. Included in that post was a model of a Santa Fe ice service car, built from a Westerfield kit (the post showing the model and explaining is presence in PFE territory is here: https://modelingthesp.blogspot.com/2020/10/ice-service-refrigerator-cars.html ).

Several readers promptly noticed that the Santa Fe ice car had its coupler boxes protruding in a way that is not familiar in the transition era. Below is a close-up of the car end shown in that post. 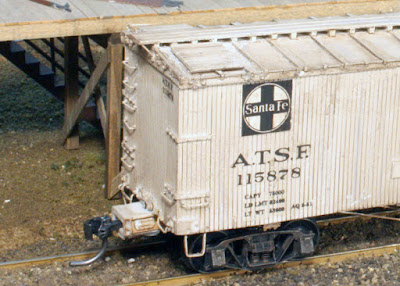 I had wondered myself about this, and obviously there was a problem, as soon shown by Ian MacKellar, who sent me a photo of the underside of his model, built from this same kit. (Thanks to Ian, both for providing the information, and for permission to use his photo here.)

The kit center sill, outboard of the bolster, should have been trimmed back so that the coupler box fits flush to the car end. Easy fix, right? just cut back the sill. But my coupler boxes, though having lids attached with 2-56 screws, had the box securely glued to the frame with CA — very securely. I had to largely destroy them to remove them. The simplest fix then was to use the conventional Kadee box with the same #158 whisker couplers. Here is a close-up.

With this change, the couplers now are positioned properly at the end of the car, and the model now looks all right. The boxes and screw heads were painted light gray.

The view below shows the modified Santa Fe ice car, being spotted at Western Ice Company’s loading door. Today Ten-Wheeler SP 2344 is assigned to the switching at my town of Shumala.

I am glad to have received expert help in resolving this coupler position issue, one I wondered about but didn’t have the personal knowledge to confidently correct. But now it’s done, and the car can start delivering some of those “traded” ice loads between PFE and SFRD.

Posted by Tony Thompson at 9:16 AM