Most modelers are familiar with the concept of refrigerator cars being used in ice service, that is, used to deliver ice to icing stations. This was sometimes done with revenue-service cars, with ice simply piled inside, but usually ice service utilized older cars, usually with ice bunkers removed and ice hatches sealed or plated over. Such cars were usually lettered “ice service” or equivalent, to keep them in that service.

Some years ago I described the general background of this topic, including references to Pacific Fruit Express practice in this regard. That post, if you would like to consult it, is at this link: https://modelingthesp.blogspot.com/2013/06/ice-service-refrigerator-cars.html . That post was followed up a few weeks later with further details, including a little about my modeling of PFE ice service cars (see the post at: https://modelingthesp.blogspot.com/2013/07/more-on-ice-service-reefers.html ).

To briefly illustrate, repeating photos from that post, shown below is my ice deck and its storage house, representing a small local company (called Western Ice) that doesn’t have the capacity to produce 300-pound ice blocks for reefer icing. That means that such ice is shipped in. You can see the loading door on the side of the ice house. 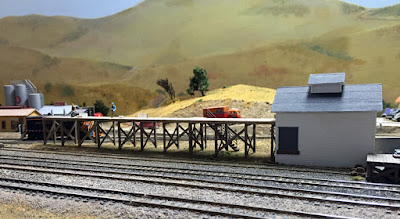 Most of the ice arrives in PFE cars, lettered for Ice Service, some with blanked openings where the ice hatches had been, as in the case of the Red Caboose product shown below (you can click on the image to enlarge it if you wish). Note also the paint patch where the “Ice Service” legend is lettered, presumably reflecting a conversion to ice service since the last paint job. The white paint patch contains a “return to” notice. 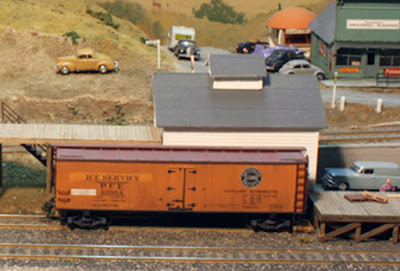 But there can be more to the story. One revealing part of my interview with Pete Holst, retired PFE Car Service manager, who worked many years with ice cars, was on this topic. An especially interesting part of the interview is his comments about trading ice with the Santa Fe. Of course Santa Fe’s SFRD operation was a vigorous competitor of PFE and vice versa, and on many fronts the two would not have dreamed of cooperating. But Pete describes trading ice when either he or his SFRD counterpart, John Daly, found themselves short, and of course replacing it later. You can read that interview with Pete at: https://modelingthesp.blogspot.com/2012/09/pfe-operations-from-pete-holst.html .

It was because of this interesting detail that I wanted to model a Santa Fe ice service car, so that I could occasionally deliver Santa Fe ice on my layout. There is a Westerfield kit for such a car, kit no. 10864, for a rebuilt Class RR-T or RR-U truss-rod reefer, rebuilt to carry ice, without ice bunkers or hatches, and reclassified IE-T or IE-U.

The Santa Fe’s truss-rod 40-foot reefers of this type had originally all been built between 1909 and 1918, and most were out of service by 1935, either scrapped, rebuilt into more modern reefers, or converted to ice cars. Some of these ice cars did run into the mid-1950s, as shown in the Official Railway Equipment Register (ORER).

Accordingly, I acquired such a kit, and decided it should have the post-1938 all-gray paint scheme, along with the Santa Fe reporting marks of the 1938–1943 era, namely with periods in the initials. Here is a view of the completed car, standing at Western Ice Company’s loading door. 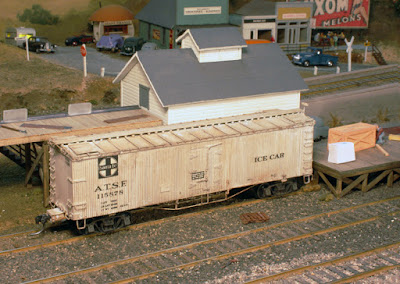 These inbound ice loads, of course, are waybilled appropriately. If from a private ice company (as in the example below), the shipment would likely be billed like any other freight shipment. But some shipments could be from a PFE ice house, and then the load would be regarded as company property and there would be no freight charge. (Although PFE would not then be charged for the ice used in icing cars at Shumala.) Waybills should reflect this. Here is an example of commercial ice, being moved to Western Ice in Shumala. 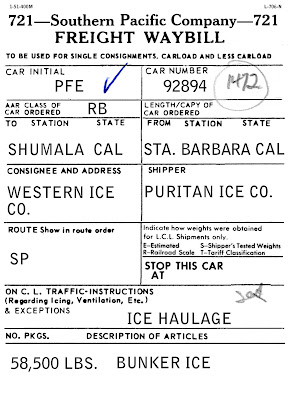 A load of Santa Fe ice would be handled similarly, though if it were a trade with PFE (as would be expected), likely some arrangement would be made, where neither half of the trade would be billed for transportation. That is how I have made out this waybill. 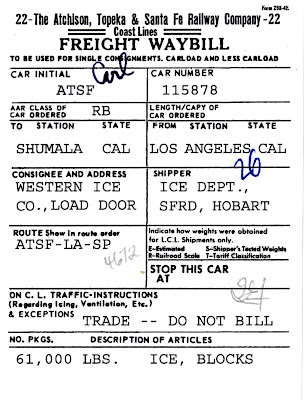 Handling ice service cars and shipments adds interest and variety to ice deck operations, and I have enjoyed inserting an ice car movement every several operating sessions. And now I can vary it with a Santa Fe ice service car.