Many owners of refrigerator cars assigned a few old, worn-out ones to ice service. Ice service was the transportation of ice from places it was produced, to smaller ice houses which didn’t have ice manufacturing capability, which then simply stored the ice for later use.
Pacific Fruit Express was no exception, and in fact maintained a number of cars in ice service. As explained and illustrated in Chapter 13 of the PFE book (Pacific Fruit Express, 2nd edition, Thompson, Church and Jones, Signature Press, 2000), PFE had separate listings for Ice Manufacturing and Ice Transfer plants. Many of the latter were commercial ice companies, such as Union Ice and many other companies, but a few were small enough to need ice brought in by means of ice service reefers.
In addition, when ice got a little short at facilities serving a heavy harvest, additional ice could be moved to those facilities with the ice service cars, usually from PFE’s own Ice Manufacturing plants, but sometimes from commercial ice companies.
We know from several sources that PFE lettered its ice service cars just like all the other cars, except for the added legend ICE SERVICE, in 9-inch lettering in place of the usual PACIFIC FRUIT EXPRESS legend above the reporting marks. This lettering has been provided in Microscale set 87-501 for years, so you can letter any kind of PFE car with those decals, and obtain an ice service car.
Recently Red Caboose re-ran its PFE R-30-9 model reefer in Ice Service lettering, which appears to be entirely correct. This is my lightly weathered version of the ready-to-run model.

This is the style of PFE lettering after early 1952, when lines above and below reporting marks and numbers were omitted, along with periods in “PFE.”
I will add a comment about weathering. There is a tendency among modelers to weather ice service car models heavily, and it’s true these were probably rarely washed; but they did get repainted from time to time, as part of car upkeep, so a relatively recent paint job like the model shown above is entirely appropriate. For photos of cars like this in service, see page 154 of the PFE book.
There is another kind of ice service car, which some railroads used to deliver ice to section houses, homes of signal maintainers and others, and many depots (before the days of widespread refrigerators instead of ice boxes in homes). Ice might also need to be delivered to stations at which passenger equipment needed to receive ice, usually for ice-activated refrigeration, but also for dining car kitchens. Among them was SP, and they bought old PFE reefers from time to time, and then used them for this delivery service. This is shown in Chapter 4 of Volume 4 in my series on Southern Pacific Freight Cars.
Among the SP company ice service cars were some elderly cars which had been classified as Class R-30-2 on the PFE, and were retired by PFE in the 1930s. The SP bought ten of them. As with most other SP ice service cars, they were painted boxcar red and given SPMW lettering.
Some years back, I built one of the Westerfield resin kits for those early PFE Class R-30-2 cars, so I could represent one of the ten that were purchased for SP company use. Here is my version of the lettering on one of these cars. 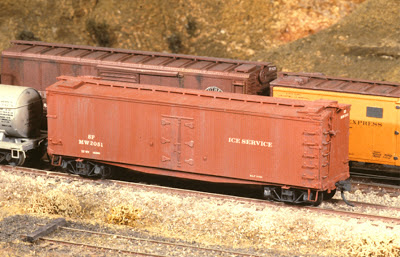 Just one word of caution: these kinds of ice service cars would rarely be interchangeable. That is, the PFE cars would not be in use for SP company delivery, nor would the SPMW cars be employed by PFE to move ice around. So having both kinds introduces still more operational variety.
In summary, Ice Service cars provide a variant kind of refrigerator car operation, for those interested, and even if you don’t model an icing facility, you can still move ice cars like the PFE ones in mainline trains, en route to someplace that is short of ice. And of course company-service ice cars like the SP ones can go anywhere on the railroad.
Tony Thompson
Posted by Tony Thompson at 9:36 AM