Last fall, I posted a brief series of comments about electrical work I was doing on the layout. The core of it was described in the first of those posts (it is at: http://modelingthesp.blogspot.com/2012/09/electrical-wars.html ) and there were two more following posts. The third one contains a link to the second one, if you want to view them in addition to Part 1 (the third one is here: http://modelingthesp.blogspot.com/2012/09/electrical-wars-part-3-hand-throws.html ).
This spring I have continued with some of the same work, adding more feeders to track segments and cutting more gaps at frogs, so that turnouts are no longer serving to route power (except to their own frog). But this alone has not solved the (apparently) mysterious short circuits in my control panel at Shumala.
This panel was designed and wired in the days of cab control, and to permit operation of locomotives moving to and from the turntable, while both mainline and switching operations are going on, I had divided the Shumala trackage (or Jalama, as it then was) into a number of small parts. This is evident in the schematic track diagram on the old control panel: 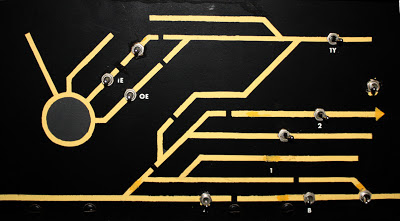 The panel was made by painting a rectangle of Masonite yellow, then adding tape striping, and overspraying with black. The notations “IE” and “OE” refer to Inbound and Outbound Engines, respectively. The arrow points in the direction of the branch line track to Ballard.
The number of switches on this panel, many of them double-pole, double-throw (DPDT) and some of them four-pole, double throw, made for a lot of wires inside the panel. Here you see at right the twelve-pin Jones plug which permitted the panel and its wiring to be detached from the layout for work at the bench. 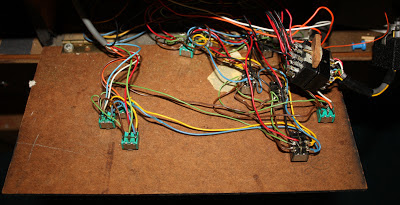 I used Jones plugs in a number of places around my prior layout in Pittsburgh, since they are sturdy and reliable. But if not used very often, their pins and sockets can get a little oxidized and have high friction, not a desirable arrangement. When I have the chance to replace them today, I usually do so.
[What’s a Jones plug? It’s a type of cable connector with flat pins, so arranged that they can only be plugged into the receptacle one way, for example with one or more pins turned at 90 degrees to the others. They are now sold by Cinch and sometimes called Cinch-Jones plugs. Here are some illustrations of them: http://www.cinch.com/products/misc-commercial/jones-plugs-sockets .]
The twelve-pin Jones plug at the control panel was to permit detaching the panel from the layout, either for more convenient work on the panel or in case the layout might be moved. But in any case, I had outgrown the 12-pin capacity. I decided to replace it with a 25-pin D-subminiature plug (DB-25). [If you don’t know about these, you may be interested in a Wikipedia article, at: http://en.wikipedia.org/wiki/D-subminiature .] Some will remember them as serial connectors for RS-232 devices, for example printers. These connectors are smooth working and easy to wire with the solder-bucket style I use. They are made by ITT-Cannon and others. Because of the “D” shape, the plug and socket can only go together one way, but it’s nevertheless vital to number your pins (note the “24” at the top of the left connector in the photo) so you can keep track of what you connect to what.
In planning my new electrical arrangements at Shumala, I spent some time deciding how I wanted things to work. I then took a digital photo of the panel front, similar to the one shown at the top of this post, and simply rearranged and modified its elements in Adobe Photoshop until I arrived at an arrangement I liked. Even the photographed DPDT switches can be moved around as needed. Here is that photoshopped panel, with some tentative labeling: 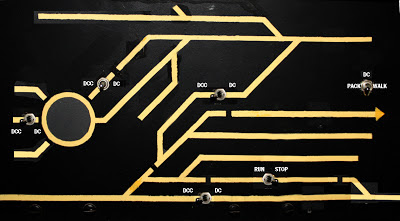 Next I had to modify the physical panel to match, and also to adjust the cosmetic appearance to match this design! But I will get to that in the next post.
Tony Thompson
Posted by Tony Thompson at 9:57 AM