In the early 1950s, Pacific Fruit Express was approached by several companies about the possibility of becoming part of PFE. (I will just summarize what is provided in more detail in the PFE book, Pacific Fruit Express, 2nd edition, by Thompson, Church and Jones, Signature Press, 2000). Two of these were meat packers, Armour and Cudahy, who wanted to sell their car fleets to PFE and then lease the cars back. PFE did not really want to get into meat shipping, with its very different geographical patterns, and with operations which would range far afield from the PFE shops where its cars were maintained. They turned the packers down.
The more interesting one was Rock Island, whose contract for refrigerator cars with General American was about to expire. They wanted to connect with PFE in the same way as the Western Pacific had done: buy and provide to PFE a sufficient number of new cars to account for their share of PFE’s total perishable traffic, while PFE would maintain, and more important, operate the cars year-round. The cars would essentially be pooled with all other PFE cars, not preferentially returned empty to Rock Island for loading, just like the situation of WP. And like the WP, Rock Island was happy to accept a monthly payment for car use which would pay slightly more than their equipment trust charges. PFE could expect to make money because they normally realized more revenue than the bare-bones payment for the equipment.
This discussion apparently was begun through the Southern Pacific, long a partner with Rock Island in the Golden State route to Chicago via Tucumcari, New  Mexico, and PFE put together a package of how the work would be done. In particular, Rock Island was prepared to purchase up to 1000 new steel cars (built to PFE blueprints), and wanted their own emblem to be on the cars, just as was the case with Western Pacific. The PFE memo about the proposal stated that they had no objection to so decorating the cars, and expected that car numbers could start in the 58,000 series (a number series which in fact PFE never used). Along with this memo came an SP letter stating blandly that the proposal should be considered.
When this package of information went off to Union Pacific (both parents of PFE would have to agree to anything like this), there were fireworks. The UP was strongly opposed, and this came from several parts of management. (I know this because the entire file, including memos from lower-ranking managers to their superiors, is in the UP President’s Office microfilm at the UP Museum, from which I made Xerox copies.)
Not only did UP feel that they did not want to help Rock Island, which they saw as a competitor, but the RI mileage to market would be much smaller than PFE’s traditional cross-country hauls, thus generating less revenue per car; the RI operations were a long way from PFE shops, and would either require a new eastern shop, or long empty hauls to service cars in existing PFE shops; and Rock Island’s perishable season was the same as the ones PFE already served, so the added cars would not be of benefit at that time of year. Lastly, UP could foresee competing routings of perishables via Tucumcari or even joint routings of Rock Island with D&RGW via Ogden. With UP being opposed, the proposal was turned down.
Among the several intriguing things in all this correspondence was a note from one of the UP managers, that he wished to forestall PFE’s plan to decorate an existing PFE car, in the Rock Island medallion and number series, for management approval. He felt that this would give the RI proposal more reality than he thought it should have. But I have wondered ever since if perhaps this car decoration had already happened.
To that end, I decided to make a model of such a car. The Rock Island proposal was in 1953, so I thought it might be reasonable for PFE to have chosen a little older car, such as a Class R-40-23 car, to do this sample paint job. I simply upgraded the details on an old Athearn reefer I had on hand. I added brass wire grab irons, placed placard boards, and installed A-Line sill steps, then repainted it Daylight Orange.

The original Athearn roof-end piece can be used for this car, but the ice hatches have to be modified (see my previous post on the ice hatches at: http://modelingthesp.blogspot.com/2013/04/upgrading-old-models-athearn-reefers.html ) and the running board replaced. I used a Plano etched-metal Morton running board, installed with canopy cement. I also widened the brake step with a piece of scale 2 x 4-inch styrene, and added a Detail Associates Equipco handbrake wheel (part BW 6401).
Lastly, the cars of Class R-40-23 were built with air circulating fans, and a nice way to represent the fan shafts is to install Precision Scale boiler washout plugs (part no. 48201), which are the same size and are cast with a square “shaft end.” I prepaint them black before installing in drilled holes. Here the black trim parts have already been painted. 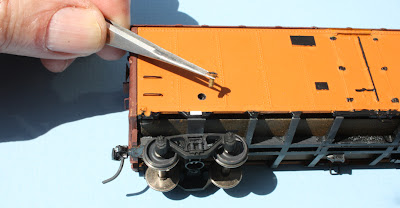 Note also the route card board, added with scale 1 x 4-inch styrene on the left bolster. As I pointed out earlier in an earlier discussion of route boards (see: http://modelingthesp.blogspot.com/2011/11/route-cards-4.html ), this was the standard PFE location for these boards on steel ice cars.
Next, I was ready to letter, using Microscale decals to letter it as car 58001. Most of the lettering was taken from set 87-414, and entirely follows the lettering practice for Class R-40-23. For a Rock Island medallion, I had to choose between black and red, and chose red as perhaps the image the railroad would have wanted to project with these new cars. Advice on the RI decal was provided to me by Rock Island expert Steve Hile; it is a Rail Graphics product. Here is the result.

I have not added a reweigh date, because I haven’t decided if I will weather the car in order to use it regularly on the layout.
For now, I consider the car complete, and it will probably reside most of the time in my display case, rather than operate on the layout. But every now and again, it may show up in mainline trains, just for fun.
Tony Thompson
Posted by Tony Thompson at 9:44 AM