The great majority of refrigerator cars owned or leased by packing companies and used to ship meat and packing house products were wood-sheathed cars, and most were 36 or 37 feet long, instead of the traditional 40- or 41-foot length of reefers used for produce. My prior posts about modeling meat reefers are about the shorter cars (see, for example, the series conclusion at: http://modelingthesp.blogspot.com/2013/05/modeling-meat-reefers-part-5.html ).
But around the time of World War II, a few packers modernized and began to acquire steel reefers. Prominent among them was Armour, which during 1948 and 1949 bought 2000 steel 40-foot cars. They were numbered 1–2000. Although some sources have claimed that General American built all 2000 cars, there is now an authoritative article by Ed Hawkins in Railroad Prototype Cyclopedia (Vol. 21, pages 94–113, 2010), which shows that while General American built the first 1000 cars, American Car & Foundry built the rest, cars 1001–2000 (Lot FC-3300) in 1949. Here is a builder photo (ACF Industries photo, courtesy Ed Kaminski).

Note the distinctive ends, lacking minor ribs; these have been called “rib-naught” ends and were an AC&F product. They are not easily modeled. And as Ed Hawkin’s article demonstrates, the cars also had an unusual roof, and the door is shorter than on typical produce reefers.
Still, in the interest of diversifying my fleet of short, wood-sheathed meat cars, I wanted have at least a stand-in for one of these steel 40-foot cars, even if it doesn’t match all the prototype’s specific details. I decided to go ahead with a model of one of the Armour cars, even though it would have to be designated as a “mainline” car, one which is only seen in passing trains and can thus avoid close examination which would reveal its various shortcomings.
As it happened, I had among my collection an orphan car, discarded from the Pittsburgh Model Railroad Club fleet when the club moved out of the city to its current suburban location. It is an Athearn all-metal model, essentially the Athearn metal version of the PFE Class R-40-23 cars, but is not a bad stand-in for the Armour cars, if one neglects the incorrect ends. It is correctly decorated in the postwar Armour paint scheme with the red-starred emblem. I think Armour is a particularly good choice, because their car fleet, second only to Swift, was one of the biggest meat packer fleets in 1953 (see my post at: http://modelingthesp.blogspot.com/2011/02/modeling-meat-reefers.html ).
The car had some issues as I received it: missing brake wheel, ice hatches not well attached to the car body, and a missing door latch bar. The latter part is no problem; Grandt Line offers a very good molding of these latch bars, part 5167, for standard-gauge refrigerators. I fumbled around in my parts collection and came up with a good version of the prototype’s Ajax brake wheel. I simply used CA to fasten down the ice hatches.
With an overspray of Dullcote, the car was ready to weather. Once weathered, I added a reweigh date (the car shows a built date of 10-48, and was required to be reweighed in 30 months, thus the mid-1951 choice of date), as well as repack data and a route card on each side. 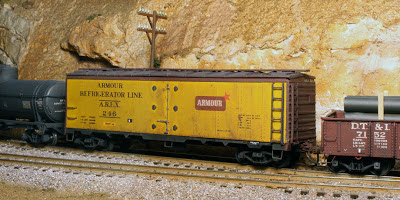 As I already said, this car has some inaccuracies in detail, and so will be restricted as a “mainline” car on my layout (and it is shown in that use above), but it adds a modern type of meat reefer to my fleet.
Tony Thompson
Posted by Tony Thompson at 9:44 AM