I haven’t posted about waybill topics for awhile, in fact not since my post last summer in this thread, which was about documents relating to waybills (see: http://modelingthesp.blogspot.com/2012/07/waybills-26-prototype-documents.html ). And by the way, to find all the posts with “Waybills” among their keywords, use the search window at the upper right of the blog page. That way, you can find other posts which touch on waybill issues but are not part of this thread of numbered posts specifically entitled Waybills. For example, my post commenting about refrigerator car service terminology (at: http://modelingthesp.blogspot.com/2012/12/refrigerator-car-service-terminology.html ) would be found this way.
This present post takes up the subject of waybill cycles again, for waybill systems in which multiple car movements are provided for at one time. I have discussed this in relation to Frank Hodina’s interesting approach (see: http://modelingthesp.blogspot.com/2012/05/waybills-25-bill-cycles.html ), and also for the waybill system used on Otis McGee’s Shasta Division layout (at: http://modelingthesp.blogspot.com/2012/04/waybills-21-understanding-waybill.html ). As I stated in the latter post, it is important on most layouts to devise  a set of waybills which can be used to support the desired operating pattern(s).
I will give some examples, and will show all the bills in a cycle. By “cycle,” I mean a closed series of layout movements, “in both directions,” if you will. (Some cycles are more complicated than that!)  These cycles are both for Otis McGee’s layout and for my own, the difference being that the size and format of the waybills are different. The McGee bills are the operational equivalent of an old-fashioned four-cycle waybill, but at the same time are greatly different, because there is no car card; load and routing information is included; and the bill looks like a prototype waybill. To me, that’s an advance.
To clarify, there is always a “cycle” if a car moves one or both directions empty. But what I show here are loaded (or mostly loaded) car cycles, just to illustrate that these can be effective. You will note that most of these are staging-to-staging moves in each direction, but not all.
I will begin with a couple of cycles in Otis McGee’s system. First, a UP box car, moving, as I mentioned, staging to staging. These two waybills would ordinarily be contained in the same transparent plastic sleeve to combine the movements. 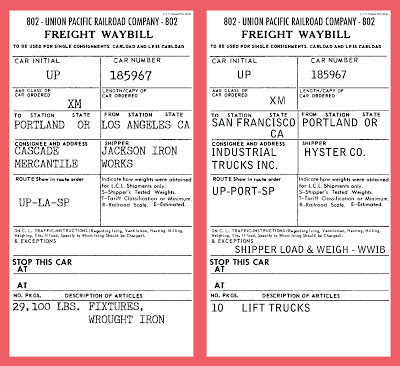 Refrigerator car movements also lend themselves these kinds of cycles, using of course the AAR-recommended pink stock for perishable waybills. 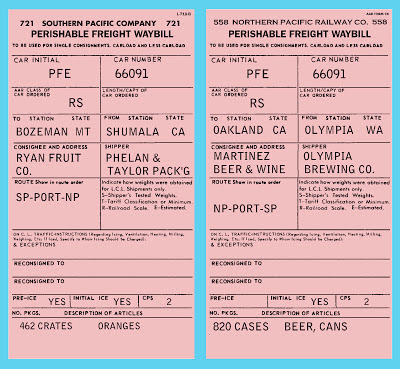 Here is a more interesting cycle, in that it involves on-line destinations on Otis’a layout, at Grass Lake. The middle movement, as shown here, is an empty move. 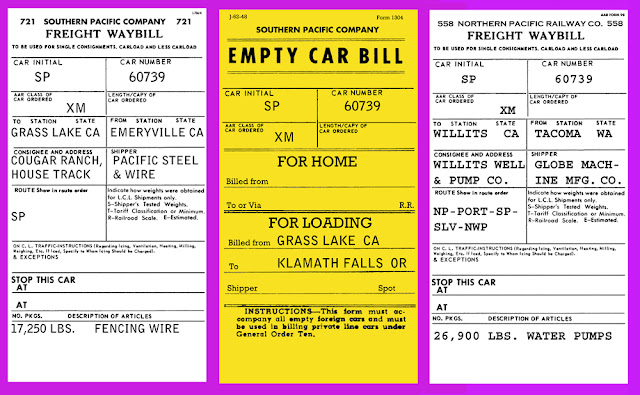 Note that the first waybill on the left represents a move northward (railroad eastward) from west staging, the second represents a move farther northward (or eastward) to east staging, and the third is from east staging to west staging.
On my own layout, using a slightly different waybill format, combining two through loads into one transparent sleeve also creates a cycle of repeated movements, though of course in my system these waybills can move in any suitable (XM) car, and are not restricted to the particular car shown. 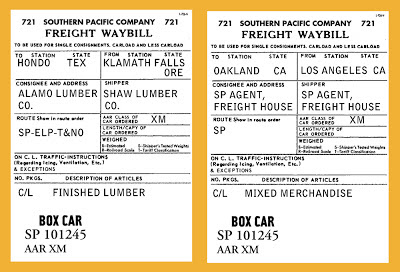 Another possibility is an open-top car, which of course would need its load changed depending on which waybill is in use, and again, either waybill could be fulfilled with any GS gondola, not just SP 92947. 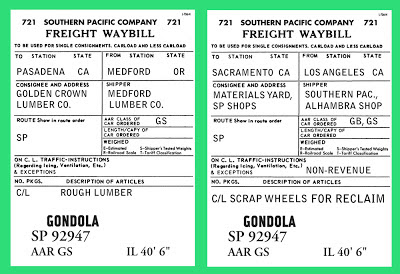 These are just a few examples among many, but I think they illustrate the point I wanted to make, that setting up cycles like these is practical and desirable with these single-cycle pieces of paperwork, just as they would be in the old four-cycle waybill system. What is undesirable about the old waybills is their rigidity (the entire set of cycles is fixed on a single document) and in many cases their inflexibility (in that many layout owners put that four-cycle document into the car card and then that car is “done permanently”). These newer-format bill documents make it easy to solve both problems.
Tony Thompson
Posted by Tony Thompson at 10:22 AM