A new SP bridge for Shumala

The bridge which carries my SP branch line over Chamisal Road in Shumala needs to be replaced. I originally built this bridge as a through girder due to tight clearances underneath, but I made it far too “deep” (height of the plate girder, relative to length). I will explain in a moment how one knows how deep such a girder should be, but here is the old bridge, when it served the Lompoc & Cuyama short line (for which the diesel is lettered). You can click to enlarge. 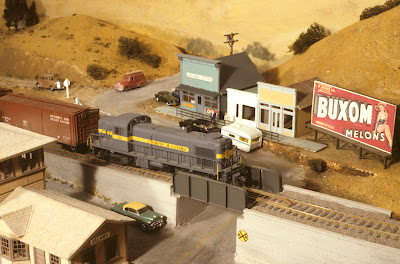 The span of this bridge is only 25 feet, about the minimum for which the prototype would build a girder bridge instead of a bridge of simple beams across the gap. Again, I am stating prototype design information. I rely on Paul Mallery’s outstanding book, Bridge and Trestle Handbook, for this kind of background.
[I will digress briefly about this title. The book was first published by Simmons-Boardman in 1958, in hard covers. A revised edition in paper covers was published in 1976 by Boynton and Associates, and a third edition in spiral-bound form somewhat later. The currently available fourth edition is published by Carstens, and has been expanded with the addition of many photographs and some new drawings; it first came out in 1992.]
Here is my (well worn) copy of the second or Revised Edition. The fourth edition contains the same information and would work equally well, but pagination changed, so I will refer to my second edition for specific sections or pages. 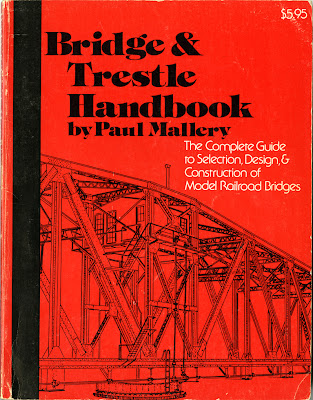 I used this edition for this project, especially Chapter 9 on plate-girder bridges. It contains a table of typical length and height of girders, which appear to range between 7 and 9 times longer than they are high, in other words, a height-to-length ratio between 7:1 and 9:1. For a 25-foot span, that means a height of about three feet on the side girders. The table also shows that a bridge of the size of my space would typically have three or four stiffening ribs (the one in the photo at top has three). Lastly, you can see in the photo above that I built the original bridge with rounded upper girder corners, but SP practice was predominantly square-corner girders.
I should mention, for anyone with a file of old Model Railroader issues (or the DVD collection), that Harold Russell published an excellent six-part series on railroad bridges in 1988, appearing in all issues from July to December (inclusive). This provides, in some cases, more detail than Mallery’s book and is well worth a look if you need details about bridges.
My original bridge, top photo in this post, was built as an open-deck design, that is, with the structural steel underneath the track visible from above, although on the SP it was pretty common for such bridges to have ballasted decks. I decided to follow SP practice this time and model a ballasted deck. That meant I simply had to build up two girders, and nowadays, with Archer rivets available for such work, it is not the challenging problem it once was.
For this project, I used Archer HO set 88025, which has three spacings of scale 7/8-inch rivet heads (I mostly used the intermediate spacing). I should mention that Archer does catalog a set called “Bridge Rivets,” HO set 88052, but they are pretty widely spaced compared to any through girder bridges I have seen in person or photographs. They may be useful for other bridge types. You can see the range of Archer rivet sets at this link; scroll down to HO scale: http://www.archertransfers.com/SurfaceDetailsMain.html .
I began with some 0.030-inch sheet styrene. Mallery shows that all the stiffening angles which are attached to a girder like this are six scale inches wide, so for simplicity I used Evergreen styrene strip, scale 1 x 6-inch. These are quickly applied with styrene cement. Here is how the girders looked after laying out the stiffener locations with pencil and applying the top and bottom strips of 1 x 6. The small machinist’s square is essential to keep everything perpendicular as it should be. 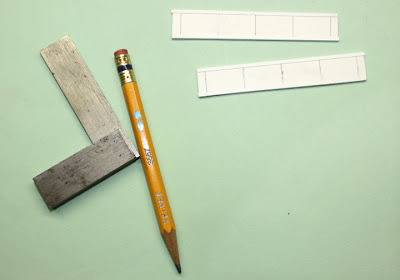 I then cut to length all the bases of the stiffener members (since they are angles on the finished bridge) and installed those too. At this point it seemed best to get the first set of rivets onto the girders, so I then applied the Archer rivets to their locations on the girder surface.

The upper girder in the photo has all its surface rivets, the lower one is partly done. A few of the crosspieces are not perfectly perpendicular, but this can be disguised when the standing leg of the angle is applied.
I might mention that applying black rivets to white styrene is greatly easier than applying them to, say, black styrene. I had the latter experience with my circumferential rivets on a (black) Athearn tank car. (You can read that story at: http://modelingthesp.blogspot.com/2012/10/modeling-sp-tank-cars-4-circumferential.html .) Once all surface rivets were in place, I added a protective overspray of Testor’s Dullcote, since the rivets can be knocked off the decals otherwise.
Next was a test fit to verify that the girders do fit into the distance between the bridge abutments, since further work would make length adjustments complicated. I then applied styrene strip entirely around the girders, to make the outside flanges. I used HO scale 1 x 10-inch Evergreen strip. These flanges should have double rivet rows, which attach the angle stiffeners inside of them, on each side of the plate.
Next I used scale 1 x 4-inch styrene strip to make the standing leg of each of the side stiffeners. Here is how the girders looked at this point: 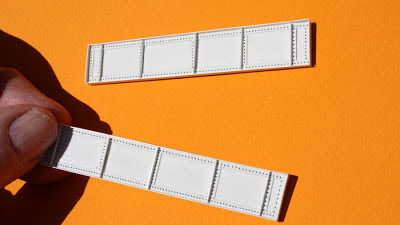 My next step will be to apply Archer rivets along the outside of all the outside flanges. Then the girders will be ready for painting, with black being a common color for SP bridges. They did paint some bridges aluminum, usually ones crossing significant highways, so I think this small bridge is a better candidate for black. But I will proceed with that part of the work in a following post.
Tony Thompson
Posted by Tony Thompson at 10:31 AM