I’ve been asked by a couple of people to provide an evaluation of a current offering of freight cars lettered for Southern Pacific, and have responded to them privately. I have hesitated to provide such material in this blog, because when responses are partly negative, I don’t want to be perceived as attacking one company out of many, nor do I want to have criticism of one particular product to be seen as a criticism of that company generally. That certainly applies to Accurail in this instance. So with that said,I will comment on the particular offering which was brought to my attention.
This is a three-pack of SP box cars, from Accurail. A photo from their web pages is reproduced here to illustrate what this three-pack contained, when it was first offered last December. 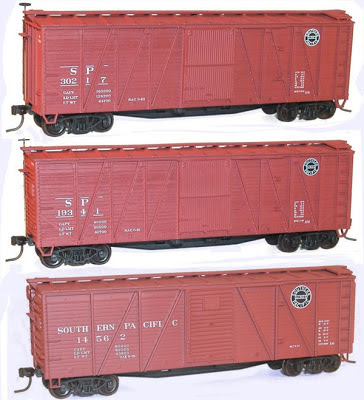 For many, these single-sheathed box cars may be attractive because we don’t have too many mass-market cars like them, and the Accurail cars are well done models, are reasonably priced, and are quick and easy to assemble. In fact, Accurail has an extensive line of useful and good-looking freight cars.
Now let’s look at these three cars individually. I will just summarize the prototype information, but for those who want more, a far more complete description is in my Volume 4 on box cars in the series, Southern Pacific Freight Cars (Signature Press, 2008).
The topmost car shown here is lettered as SP 30217, and the middle car is SP 19341. Both are numbers corresponding to SP Class B-50-14, and like that class, have three diagonal braces on each side of the door. This may be good enough right there for many modelers, but there are some problems, too. Let me be specific.
The SP cars had a much shallower center sill than this model (which is based on a Canadian National box car), and when they had single-sheathed ends, they had different end bracing than the model of SP 30217. By 1940, nearly all B-50-14 cars had received Dreadnaught ends, not corrugated ends like the SP 19341 model. Actually, the number 19341 is interesting, as this would be a former Pacific Electric car transferred to SP in 1951 and renumbered. But those PE cars did not get steel ends, but kept their wood ends, and would have received a different paint scheme than the Accurail one. Both cars 19341 and  30217 are from number groups which on the SP had radial roofs, and if you wanted to use either car, it should be renumbered to the series which had Hutchins roofs (SP 30540–30939 and ex-PE cars SP 18880-19079 and 19366-19455).
The third car, lettered as SP 14562, would correspond to SP Class B-50-15, and again, with four diagonal braces on each side of the door, it roughly resembles that class. However, the SP cars had diagonal braces running in the opposite direction (Pratt truss design rather than Howe truss, if you know bridge nomenclature), and had corrugated ends. The SP cars were also taller than the Accurail model, and did not have fishbelly center sills. With the Dreadnaught ends as on the Accurail model, a better choice to letter it would have been for Class B-50-16 (SP cars 37340–37839, or T&NO 53560–54059), but the diagonal braces would still be wrong. If you really want the car as a stand-in, removing the fishbelly sill and renumbering into either of the B-50-16 number series would help.
To repeat what I said in my introductory paragraph, this should not be taken as an attack on Accurail generally, nor even a criticism of their practice, economically necessary, of painting their models for a wide range of railroads which never owned such cars. It is only a specific description of the shortcomings of these particular cars lettered for SP.
Notice that better choices of car numbers by Accurail would have resulted in models which are closer to the SP prototypes, but still not very correct. As I already said, the cars may be satisfactory for those who just want stand-in versions of single-sheathed SP box cars, and that’s fine. But if you are concerned about accurate freight cars, these models are not good choices for the SP cars that they only broadly resemble.
Tony Thompson
Posted by Tony Thompson at 9:35 AM