In previous posts, I described my goal in this project, to create reasonable models of two PFE classes, R-40-14 and R-40-20, which had W-corner post ends and thus are not readily modeled with the excellent InterMountain versions of either R-40-10 or R-40-23. I used Athearn reefer bodies, and simply replaced the ends with new ends from Westrail (see the post at: http://modelingthesp.blogspot.com/2013/05/upgrading-old-models-athearn-reefers.html ).
Once the ends had been airbrushed boxcar red, I added the end lettering (I found this much more convenient on an end lying flat on the bench). 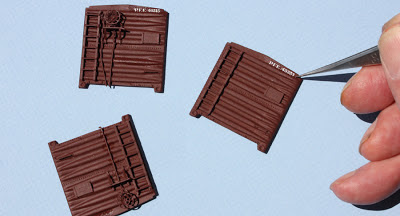 Then I assembled them to the bodies with model airplane canopy cement, adjusted any gaps with modeling putty, and did a final touchup with the boxcar red paint.

A few words on paint schemes: I will describe my thinking for the two models in question, but hopefully these comments will illuminate the general topic of PFE paint schemes at particular eras.
To start, it’s useful to recognize that PFE (like SFRD and to a lesser extent ART and FGE) directed empty cars, as they came west, arriving onto the parent railroads, UP and SP, to their own shops for inspection and (if necessary) repair. This essentially happened after every loaded trip of the PFE cars. This is an extreme difference from free-running cars like box cars or gondolas, which might wander from railroad to railroad for a year or more and never return to home rails. Thus PFE not only could readily undertake any upgrading campaigns for particular classes, and complete them in a matter of months, but could also repaint cars as that was needed, across the fleet.
The overall pattern of PFE painting practice was described to me in a 1985 interview with Earl Hopkins. So you know who he was, Earl went to work for PFE in 1929, and rose to be Engineer, Car Construction, by the end of World War II. In 1954 he became Assistant General Superintendent of the Mechanical Department, and in 1962, when the Car and Mechanical departments were combined, he became General Mechanical and Engineering Officer, serving until his retirement in 1974. Earl stated that the goal was to repaint cars as needed, but in any case not longer between painting than four to eight years for wood-sheathed cars, and ten to twelve years for steel cars. Moreover, he said that this pattern was followed in PFE as long as he worked for the company.
This and many other insights gleaned from Earl are in the PFE book (Pacific Fruit Express, by Thompson, Church and Jones, 2nd edition, Signature Press, 2000), as are photographs and detailed descriptions of paint schemes by era. In addition, transcribed texts of my taped interviews with Earl have been deposited with the California State Railroad Museum and the Union Pacific Museum.
The two models I need to paint are classes R-40-14 and R-40-20, built, respectively, in 1941 and 1945. By the time I model, 1953, the -20 car is only eight years old, but the -14 is twelve years old. Logically, the odds are excellent that the -14 would have a later paint scheme, quite likely the scheme with two black-and-white emblems adopted in 1951, while a fair fraction of the -20 cars would still have carried their as-built paint, of a single emblem on each side of the car.
The first challenge to be met with any of the PFE paint schemes as late as 1948 is that side hardware, including door latches and hinges, sill steps, side sill tabs, grab irons, and ladders, were painted black. This may look like a daunting challenge to do by hand. I have learned with experience that it can be done, using patience (I rarely paint more than a fraction of all the details at one sitting), a hand rest to steady the brush, and a good-quality small brush, usually size 5/0. [I will add that buying cheap brushes is the very definition of false economy.] I essentially use the side of the brush for parts like ladders: 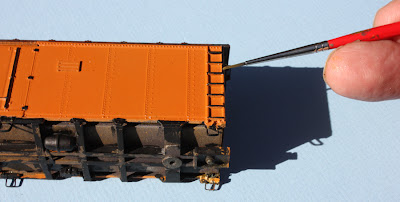 The placard board shown above remains to be painted.
By only painting the outer part of the molded-on ladder rungs, they look much smaller; likewise I only paint the outermost surface of the ladder stiles. And of course any slips or mistakes can be touched up with a little Daylight Orange.
My last modeling step was to install Kadee No. 58 couplers in the Athearn boxes, and to put Reboxx Code 88 wheelsets in the Athearn AAR trucks. Then the car was ready for lettering.
Now to decals. Unfortunately, it still remains true that there is no single good set of PFE lettering. The old Champ “Superset” SHS-190, if you can find it, contains a some useful and correctly sized lettering. And there is an excellent color UP medallion in the old Walthers set 1503, again, if you can find one. Microscale has two sets for ice reefers, set 87-501 with good black-white UP heralds and some items of post-1951 lettering, and set 87-414, for the 1946–1951 paint scheme, with good color UP heralds. Both have a number of shortcomings, including wrong-sized lettering, and will be updated and replaced (thanks to some fine work by Dick Harley) — sometime soon, but no schedule exists.
But in this project, I found myself doing 1946–1951 and post-1951 paint schemes mostly with Microscale 414, supplemented with a Champ SHS-190 (wish I could get another one of those). This is the right side of the -20 car, as yet unweathered, so the lettering can be seen clearly.

This lettering can be compared to a prototype photo of the right side of a Class R-40-20 car, among several PFE photos, in a prior post about route cards, at: http://modelingthesp.blogspot.com/2011/11/route-cards-4.html .
So the reality is that if you’re doing PFE lettering today, you just have to piece together heralds, dimensional data, and other items of lettering from whichever set has them in the correct size. Prototype photos (for example in the PFE book) are your guide for content, size and placement.
Regarding weathering, everyone weathers as they like. [The handout for the joint clinic given by Richard Hendrickson and me on this topic is available; see: http://modelingthesp.blogspot.com/2011/10/weathering-clinic-handout.html .] But however you do it, with nearly all freight cars, you would simply weather more heavily, the longer the car has been service prior to the time you model. But PFE and some other reefers do not follow that pattern, because they were frequently washed. (PFE car washing is described in the PFE book, cited above.) As a result, even cars carrying fairly old PFE paint schemes might be fairly clean (if faded), while a paint scheme only a couple of years old might be quite dirty. For PFE cars, you get to choose how dirty you want the model to be. This comment refers only to car sides, however, as roofs were not washed, and ends only rarely.
Anyhow, here is what I ended up with. First, the same R-40-20 car shown above, but now weathered, and spotted for icing at the Shumala ice deck on my layout. The car’s correct W-corner-post ends are evident. 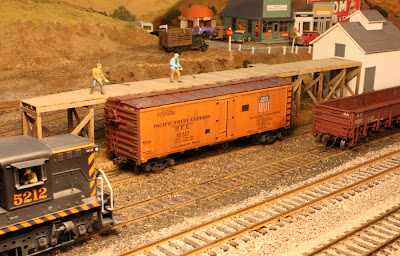 Next, the R-40-14 car, modeled as repainted in the 1951 scheme of two black-white medallions, shown at my Phelan & Taylor packing house (a Showcase Miniatures kit), and showing off its B end, with Equipco hand brake. 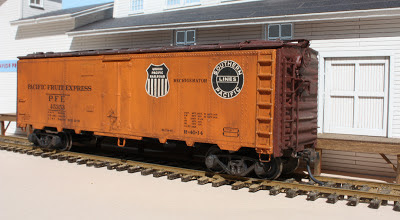 I’m pleased with these two cars, representing two PFE classes of 1000 cars each, which I had not previously been able to include in my fleet. Although the car ends I used are not currently available, steps are being taken to see if they can be returned to the market.
Tony Thompson
Posted by Tony Thompson at 4:45 PM