In my previous post on my meat reefer project, which is available at: http://modelingthesp.blogspot.com/2013/04/modeling-meat-reefers-part-4.html , I described the completion of painting, and the application of dry transfer lettering to the four cars of this project. In this final post, I show all the cars.
But it is worth mentioning, for those with an inordinate fear of dry transfers (I’m just joking), that some of the lettering for these same reefers is also available in decal form from Jerry Glow. You can see his catalog at: http://home.comcast.net/~jerryglow/decals/full.html . You can scroll down the alphabetical listing to Armour, Swift, and Wilson. But I will repeat my comment from the previous post: if you proceed with care, dry transfers work every bit as well as decals — they are just applied differently.
The Cudahy and 1948 Swift cars already lettered were shown in the previous post, though in an unweathered condition. Here is the finished Cudahy car, spotted for unloading at the Peerless Foods wholesale grocery warehouse in Ballard, on my layout. 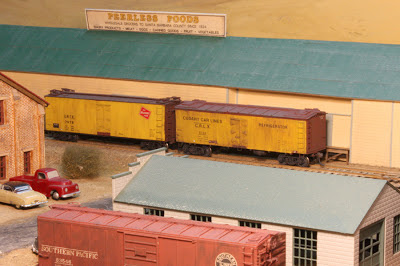 Also shown at its normal destination, Peerless Foods, is the 1948-scheme Swift car. 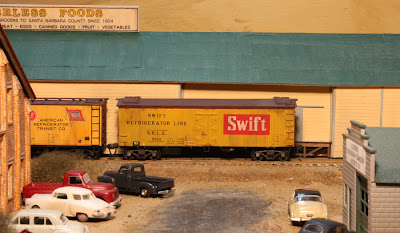 Previously I didn’t show the orange Wilson car, the sides of which I airbrushed Floquil Daylight Orange as a reasonable light orange, so here it is. The temporary trucks are a roller-bearing type, among my “spray booth” trucks. 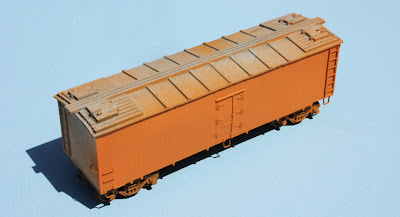 The next step was the application of boxcar red to the roof and ends, then arranging the lettering with the Clover House dry transfer set identified earlier, no. 9416-01. I applied my usual Kadee no. 58 couplers and, for this car, a pair of Tahoe Model Works Buckeye trucks, which have the sideframe shape visible in many photos of Wilson cars, and correctly have spring planks. These are TMW part no. 106. In this photo, the car isn’t yet weathered; note the transverse reservoir mounting, typical of Wilson reefers.

Lastly, my model of an Armour car is a repainted Atlas reefer, which was manufactured with an unusual four-hinge side door instead of the more common six-hinge door. The four-hinge door might have been chosen so that the doors could be made to operate. As I have neither need nor interest in operating reefer side doors, I glued them closed and shaved off the oversize hinges.
As far as I know, Armour did not have any four-hinge-door cars, so I simply added two Grandt Line reefer hinges (Grandt part 5168) to each door to make up the difference. The Grandt parts are a good match to the style of the Atlas hinges, and are molded in dark gray, so I simply sprayed them with flat black before installing on the reefer body.
The prototype Armour cars appear to have continued to receive black side hardware (door hinges and latch bars, grab irons, and sill steps) after most other meat car owners had decided to paint the side hardware body color. I simply used a small brush to paint the various details black. The Atlas Vulcan trucks, though not well rendered, do resemble some trucks visible under Armour cars, so I chose to retain them on the model. And here is the car, fairly dirty to represent the appearance of many Armour cars in later years. 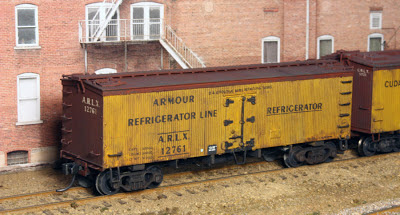 This completes my little fleet of four new meat reefers, all of the typical 36- or 37-foot length, and visibly different from the many 41-foot produce reefers, PFE and otherwise, on my layout. As I said at the outset of this thread (see my post at: http://modelingthesp.blogspot.com/2011/02/modeling-meat-reefers.html ), I am one of many modelers waiting eagerly for the new Rapido meat cars (now delayed over two years), but in the meantime, I have these.
Tony Thompson
Posted by Tony Thompson at 7:00 PM