For many years, I have used a simple cradle to support freight cars in the upside down position, for work on underframe details, installing couplers, changing out trucks, etc. The idea is so simple, I never thought even to mention it to anyone, until a visitor admired it. He thought it was an effective as well as gloriously simple idea, and urged me to write a post about it for the blog.
Let me say first that you can buy cradles of this general kind, for sums up to $20. As the saying goes, “compare that value to this idea.”
All it is, is the bottom half of a kit box (my old one is from an Athearn Blue Box) but as you will see, it could readily derive from almost any small cardboard box. I make two vertically downward cuts in the side, about an inch, on each side of the box, then use an Xacto knife to cut a tapered bottom. The width of the piece cut out is somewhat wider than an HO scale box car (obviously other scales could adjust accordingly), and the depth of the tapered part is greater than that of an ordinary sloped car roof. Exact dimensions are very uncritical.
Well, a photo may be more clear than words. Here is a cut being made; you can see the taper toward the bottom of the cutout. 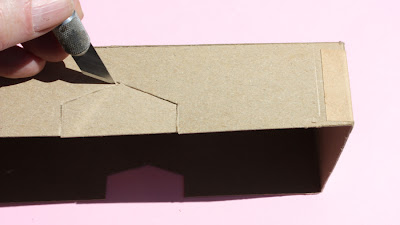 Once cuts are made, here is the completed cradle (takes under a minute to make one). 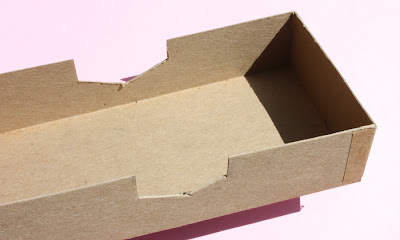 The point of the tapered bottom opening is to protect a running board, as you can see here (this is one of the Athearn reefer upgrades in progress; you can read more about these in one of the posts in my series, for example at: http://modelingthesp.blogspot.com/2013/04/upgrading-old-models-athearn-reefers.html ). It also protects vertical-staff brake wheels. 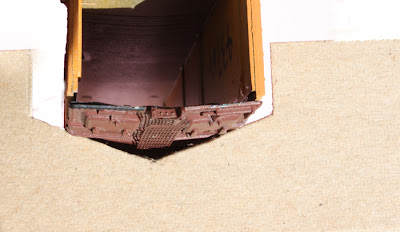 Here is an in-progress kit in the cradle (it’s a Westerfield model of a Missouri Pacific door-and-a-half box car, kit 1901, one of the old dark-resin versions). Underframe detailing work is about to begin. 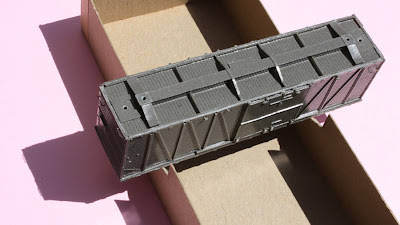 I’ve also found this cradle design to be good for working on the underside of steam or diesel locomotives.
Over time, these cradles get worn, beat up, covered with accumulated glue, paint and other spills, and bumped and bent out of shape. No problem: take a minute and cut a new one.
Tony Thompson
Posted by Tony Thompson at 11:15 AM