I have offered comments in earlier posts about typography on the layout, which means choices and arrangements of type faces, which are used, for example, for signs on structures. That previous post can be viewed at: http://modelingthesp.blogspot.com/2011/11/type-and-typography-on-layout.html . Further, I wrote about signs for several structures in my town of Shumala, in the first post in this series about structure signs, available at: http://modelingthesp.blogspot.com/2013/02/signs-for-structures.html .
Having discussed Shumala, I now want to address some signs in my town of Ballard. These include the winery, the Union Oil dealer, and the wholesale grocer’s warehouse. These are built from, respectively, a modification of the Magnuson power house; mostly from a Chooch kit; and scratchbuilt, with wood and Bristol board. First, the winery. The appearance of this structure was chosen for its general resemblance to the Firestone vineyard in northern Santa Barbara County, not far away from the area I model. I gave it a tile roof. In my first post about typography (the first link given above), I showed an early version of the new sign. Its typeface is Hadriano, created by Fred Goudy in 1918, so has an appropriate “old fashioned” or traditional look. I ended up increasing the type size to make it as readable as possible. After printing it out on glossy stock and backing it with a strip of 0.010-inch styrene, it looked like this. (You can click on the image to enlarge it.) 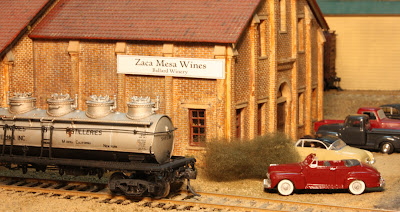 My Union Oil Company bulk oil dealer has not had a proper sign, and I added one with dark blue lettering, like the Union emblem. The typeface is Copperplate Gothic. Like the other color examples in this post, I used my local copy shop’s high-resolution color laser printer to do these. As was often the case with bulk dealers, the sign is positioned at the roof ridge of the warehouse/office building (a styrene scratchbuilt addition to the Chooch kit). The sign is double-sided, easily accomplished by printing two copies instead of one and gluing back to back, and framed with scale 1 x 6-inch styrene strip.

Incidentally, the small warehouse/office building shown above is a severely simple structure, supplying a missing building which one expects at bulk oil dealers. It is nothing but styrene clapboard and some Grandt Line windows. Interior corners are braced, in the way I usually do this. 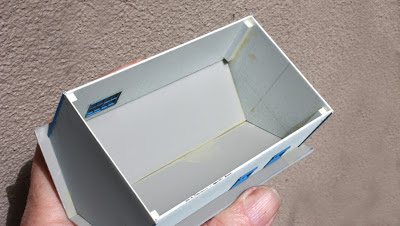 Here is a view of the entire Union Oil bulk dealer complex, including the warehouse/office on the far side, and a delivery truck. 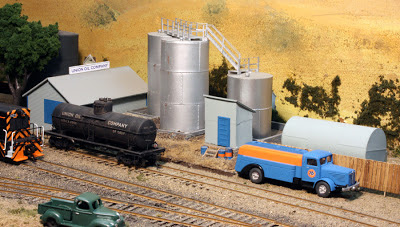 The third sign is for my wholesale grocer, which is named Peerless Foods, a common type of name in this business category. This is a great industry, by the way, as so many different cargoes can be delivered there, in both box and refrigerator cars. The sign is on the peak of the dark green warehouse roof. It is made from paper glued to styrene sheet, and framed with scale 1 x 4-inch styrene strip.

This lettering was made with “open” letters for the firm name, then carefully filled in with an art marker pen (practice your “coloring inside the lines” first). The age of the firm is shown also, along with the many grocery categories they handle. When I built this building, my layout locale was Santa Barbara County, which is no longer the case; but that is the adjoining county, so I think it can remain.
These examples are just three of the business signs at Ballard, but they illustrate a range of techniques and appearances. Like practically anything else in modeling, it is often helpful to look around you at prototype signs, but remember that styles do change over the years, and it may be more useful to look at period photographs from the time you model.
Tony Thompson
Posted by Tony Thompson at 9:48 AM