On Saturday, June 8, Jim Providenza hosted a final operating session on his Santa Cruz Northern layout – as it now is. Over the summer he plans to make a number of changes to improve operations (while replacing the water heater which is in close proximity to his helix). So although much of the layout will remain unchanged, there will also definitely be changes, at least on the upper deck.
This post is certainly not intended to document Jim’s layout, as that has been done professionally a number of times. Among other places, the layout has been described in Model Railroader in May 1996, in Railroad Model Craftsman in November 2011, and in Alan Keller’s Great Model Railroad video no. 35. Instead, I just offer a few snapshots taken during the event.
A full crew, many of them Jim’s regulars, showed up for the event. Most people naturally wanted to run trains. But since the layout control scheme is timetable and train order (T&TO), there are other positions too. John Barry dispatched, Jim acted as Trainmaster, and Larry Altbaum and I filled the operator’s positions, Larry at East Rica-Dougherty’s and me at Fallon-Zayante. Both these positions are cramped, as the layout was not built with these positions in mind, and they have had to be shoehorned in where they would fit. Here is a snapshot of Larry at his post, which unfortunately is pretty much in the aisle used by crews. 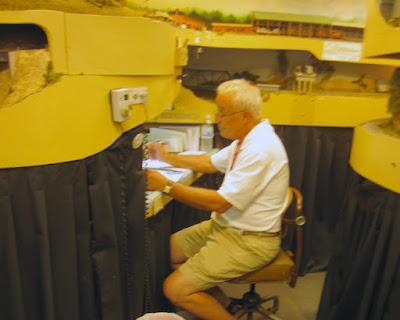 My position, located under Zayante, is at least as small, but not in a narrow aisle. You can see here the tools of the trade, including a train crew’s throttle (the operator doesn’t get to move a train), and especially that all-important phone to the dispatcher. Waybill racks are above the controls for the train order board at Fallon. 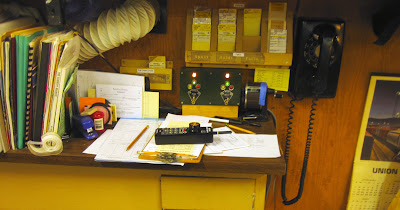 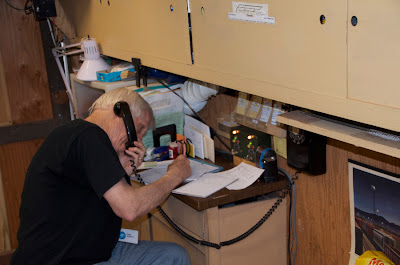 From here, if you turn around, you have a fine view of both decks, West San Jose on the lower deck, with the power for a WP train just emerging from WP staging, and on the upper deck, Fallon, with the Del Monte just passing. 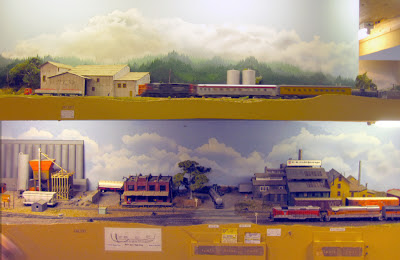 Here is the conductor on the Mountain Local, Steve Williams, working through his switch list so he can instruct his engineer, Seth Neumann (background) for the next switching move. The lower deck is nicely shown here also. 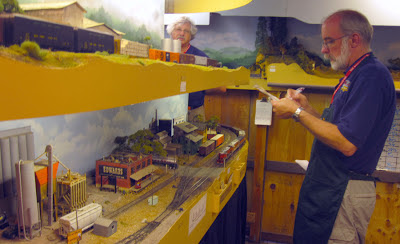 Here is the state of their switching at Fallon a few minutes later. 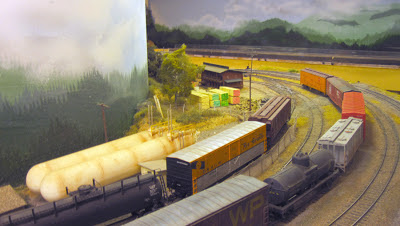 Conductors tend to spend their time thinking ahead and planning moves. Here is conductor Paul Weiss at left, with engineer Scott Kew at right. They are approaching Dougherty’s with their train, the West Perishable toward San Jose. 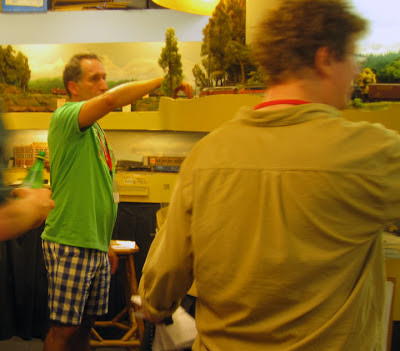 Like almost every session at Jim’s, the railroad ran well and everyone had fun. Of course there were snarls from time to time, for example when a train running late held up another one’s progress, but that is part of the game. Still, it was a terrific afternoon. As I often think at the end of such a fine operating session, our hobby doesn’t get much better than this.
Tony Thompson
Posted by Tony Thompson at 9:40 AM