In a previous post, I mentioned that there are interesting complications in handling freight cars in the United States that are owned by railroad outside the U.S., obviously meaning Canada and Mexico and awfully few others. The core of these complications is tax laws in all three countries, as I explain below, though there are also customs issues. That prior post that raised the subject was about modeling a Mexican-owned box car; see the post at: https://modelingthesp.blogspot.com/2020/09/resin-box-car-build-part-3.html ).

Tax laws, the core issue, led to rules that essentially provided that freight cars owned by a non-U.S. railroad could cross the border in either direction, but only for a single destination, As an example, a Canadian car could deliver a load into the United States, and could then be re-loaded to deliver a load back in Canada, or could be sent home empty, but was not supposed to be reloaded for a destination in the U.S. before going home.

In other words, that Canadian car could not enter normal freight car usage within the U.S., and likewise for cars of any of the three countries when across their respective borders. Otherwise that foreign car could be considered “imported,” and a considerable tax bill could in principle be rendered for violations.

(It is essential to observe here that although the above description may have been the rules, it is well known that in many instances, Canadian cars were in fact re-loaded within the U.S., as documented in conductor’s time books and other sources. Still, the rules likely represent the general case.)

Customs formalities are also significant. The paperwork associated with international shipments can be extensive, practically none of which modelers would wish to use. Much of my understanding of all this comes from The Freight Traffic Red Book (Traffic Publishing Co., New York), 1940 edition.

In many cases, an “export bill of lading” would be prepared in addition to the domestic bill of lading, and would accompany the shipment to the border, where it would be handed over to the receiving customs broker or railroad agent for use in the continuing journey. In addition, export invoices or customs declarations, of varying kinds, may also be involved, along with arrangements for cargo inspection by bonded appraisers, and payment of customs duties.

It’s essential to realize that anything carried in a freight car is subject to customs inspection at the border, and cannot enter the destination country without customs clearance (or movement “In Bond,” another subject). Sometimes a customs document of some kind would be attached to the onward waybill for the car (or mailed to consignee), but in many cases the only evidence on the waybill itself would be a customs stamp. Often a shipper would have prepaid any customs duties (and of course would have billed the consignee for same), and that might be noted on a waybill too.

For rail shipments, a single waybill from origin to destination may serve, since railroads of all three countries used the AAR waybill form. However, in some cases it may be necessary to re-waybill the shipment in recognition of customs issues, especially if the shipment had been held awhile at the border.

Finally, there was a practice sometimes followed for cars coming into the U.S. from Mexico, which might well have a Spanish-language waybill. (Some Mexican railroads also provided English-language forms, for the use of shippers with a lot of traffic to the U.S. or Canada). The border junction practice I refer to was to re-bill the load on a U.S. waybill, and then staple it atop the original waybill, or in some cases, simply retain the original Spanish waybill at the office doing the re-billing, and forward the car with the English-language bill only. This might be done by a broker, or by the U.S. railroad’s agent.

I should quickly mention here that I am by no means an expert on these matters, and base the above on what I have read, what I have been told by people who have experienced some of these issues, and by examples of prototype waybills I have seen. I hope that if there are errors in the foregoing remarks, that a comment to this blog post will be submitted to correct the mistake(s).

Just to suggest the opportunities offered by movement of Canadian or Mexican cars on a U.S.-themed layout, I want to show some examples that I have created in the spirit of the descriptions above. First is a bulk load of kerosene, in a car belonging to the Mexican national oil company, Petroleos Mexicanos (P.M.E.X. reporting mark), from a shipping point at Tepic, Nayarit. Shown below are a waybill reflecting re-billing at the port of entry, Nogales, Arizona, by a broker, and the Empty Car Bill, returning it to Nogales with instructions not to reload. 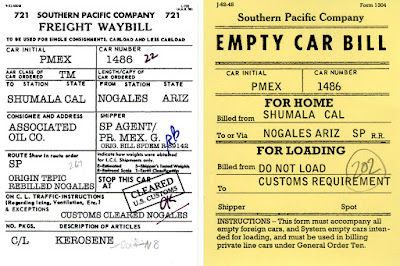 Note that I have applied a stamp for having cleared customs (I have described in a previous post how these stamps were created and applied; if interested, you can read it at this link: https://modelingthesp.blogspot.com/2020/10/waybills-part-74-more-stamps.html ). Both these bills are distinctive in that they contain indications of the cross-border character of the car movement, and thus are not like the average freight waybill or Empty Car Bill. In addition, both bills have handwritten notes of various kinds on them, as was true of almost every waybill in service.

In 1953, PMEX had almost 1500 tank cars, a considerable fleet. My long-serving model, lettered with an old Walthers decal set with Spanish capacity and other data, is below.

As one more example, here is the paperwork for a Canadian shipment of paper into the U.S., and return of the car to Canada. As I am told was sometimes done, the returning empty car moves on a regular freight waybill, much as privately owned empty cars usually did. There is also a round weight-agreement stamp, and handwritten bits. 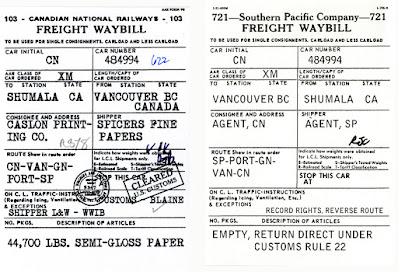 These two pairs of waybills are not the full extent of what I have experimented with, and I intend to return to the topic in a future post to illustrate further. And I hope if I have misstated any of the prototype complexities of cross-border shipment, or omitted anything important, that knowledgeable individuals will comment and clear up the record.