In the previous post in this series about building a resin box car kit (Sunshine no. 17.5, modeling Southern Pacific Class B-50-14), I had completed all model work and detailing. (You can read that post at this link: https://modelingthesp.blogspot.com/2020/09/resin-box-car-build-part-2.html ). The next step was painting.
As I have done for some years, my Southern Pacific freight cars are painted a color matched years ago to SP drift cards, namely Floquil “D&H Caboose Red,” which has a nice, rich chestnut tone to the boxcar red. Luckily I came across several bottles of it in a hobby shop some years ago and bought them all, so my stash endures. That’s the color of this model.

The next step was to address lettering. As I mentioned in the first post in this series, in 1951 SP sold its Southern Pacific of Mexico subsidiary to the Mexican government, including a number of locomotives and freight cars. (For additional background on the Mexican subsidiary, see an earlier post: https://modelingthesp.blogspot.com/2016/08/ferrocarril-del-pacifico.html .) The railroad was renamed Ferrocarril del Pacifico, and at the very beginning, the reporting marks were F del P. Not long afterward, the usual abbreviation for the word “railroad” in Spanish, FC for “ferrocarril,” was adopted instead, making the mark FCP.
For this model, I wanted to depict one of the first cars relettered, on the basis of the photograph below, clearly showing that the “S” in the SP initials had been painted out and replaced with “F del.” (Detail of a photo at Guadalajara, Mexico in April 1952 by C.W. Witbeck, Cyril Durrenberger collection) Note that all other lettering remains SP original. 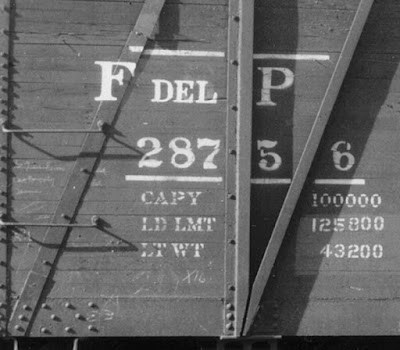 This can easily be done withe Sunshine decals, because they include the “F del P” marks (though I must caution that the Sunshine set does not have correct SP numerals, like those you see above).
So the first step is to fully letter the car, except for the “S” in “SP,” and also omit the initials on the car end. I used Microscale set 87-911 for all of this, including its correct numerals. (And by the way, do use the set revised in October 2007; earlier versions of the set are inferior and should be discarded). Here is the result.

At this point I like to install trucks. As most of the cars of this class continued to ride on T-section trucks until the end of their lives (especially the ones transferred to Mexico), I used Kadee no. 554 “sprung” trucks, and added rectangles of black paper behind the far-too-thin springs so one can’t see through them.
Then I simply weathered the car as I normally would, using acrylic washes (the basics of this technique, and a number of specialized applications, can be found in the “Reference pages” at the very top right corner of the present post). I didn’t want extreme weathering, but did want a dusty and faded look.
The next step is to apply “fresh paint” patches as needed, using Rail Graphics decal sheets, over brush-painted Gloss, then apply the “F del” reporting mark, and reweigh and repack stencils. Add a coast of flat finish, then some chalk marks. You can click on the image to enlarge it to see details, if you wish.

Incidentally, the same paint patch and replacement reporting mark initials had to be applied on the car ends, as you see  below. 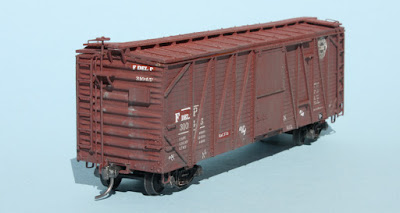 The finished car can now enter service on the layout. That may raise in some minds the question as to how freight cars of foreign railroads, in this case a Mexican railroad, were handled in the U.S., and what paperwork was required. I will take up that topic in a future post.
Tony Thompson
Posted by Tony Thompson at 10:54 AM