In Part 1, I described the first steps in assembling an HO scale resin box car, starting from Sunshine kit 17.5. This kit represents a Southern Pacific Class B-50-14 box car. The prototype class numbered 3300 cars, and the companion (and very similar) Class B-50-13 numbered 3700 cars.
These 7000 box cars obviously were a major part of the SP car fleet from their construction in 1924 until scrapping and other losses cut deeply into their numbers in the 1950s. I wanted to add one more of these cars. You can see Part 1 here: https://modelingthesp.blogspot.com/2020/08/building-resin-box-car.html .
In Part 1, the basic box of the car body was assembled, and grab irons, sill steps, underbody detail, and B-end brake gear was added. Still to come were the retainer line, couplers, running boards, and ladders. I began by adding the retainer line with 0.015-inch styrene rod, with the brass retainer valve that came with the brake step. I also added Kadee coupler boxes, but couplers won’t be installed until after painting. And I began the running board installation with an American Model Builders laser-cut wood running board, attached with canopy glue (excellent for dissimilar materials). 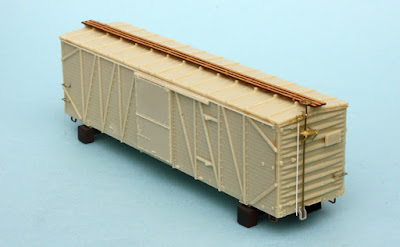 The lateral running boards require a little more effort, as they lie almost parallel with the roof contour, matching the height of the running board at car center. I used a piece of scale 4 x 4-inch styrene strip (Evergreen 8044) as a support at the inner end of the lateral board. For the board itself, I drilled holes and installed Tichy corner grab irons. Then I had to model the metal straps used on the prototype to attach these boards (see photo below, a detail of the photo of SP 31145 shown in the previous post — link in second paragraph above).

I prepared some styrene scale 1 x 4-inch strip (Evergreen 8014) by heating it in hot water and bending around a No. 60 drill. I made them overlength so I could fit them as needed, and formed a bunch so that I could chose the best ones.

First, the AMB walks received the styrene straps shown above, trimmed to fit and attached with canopy glue, and then the completed AMB walks were fitted to the roof with canopy glue. I also added Tichy end running board supports. 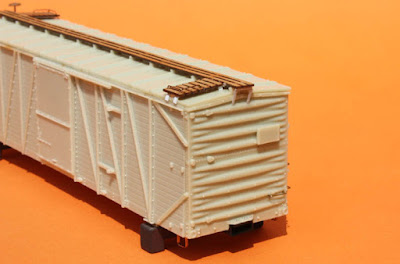 You may be able to note that the lateral walks are offset from the ladder position, as was the case on the prototype.
I have seen photos of SP Class B-50-13 and -14 cars with replacement ladders in later years, and having already built two cars worth of the delicate and fussy Sunshine representations of the as-built ladders, I decided to follow SP’s lead and use a later-style ladder. I chose InterMountain box car ladders, as they are close to the right rung spacing for sides and ends. 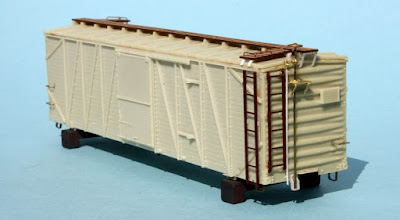 The model is now ready for paint and lettering. As I mentioned in Part 1, I plan to letter this car for the Ferrocarril del Pacifico, and will show prototype photos, along with model work, in the next post on this topic.
Tony Thompson
Posted by Tony Thompson at 9:44 AM