I have from time to time described relatively simple kits and car projects in this blog. My interest in and work on model freight cars is not limited in that way, however, and I want now to describe the work in building a resin car, specifically a Sunshine kit, no. 17.5, for a Southern Pacific Class B-50-14 box car.
As it happens, I already have two of these on the layout, not an excessive number since SP built 3300 of these (and 3700 of the very similar Class B-50-13 cars), all in 1924, and all by Standard Steel Car. But for this last Class B-50-14 model, I wanted to represent one of the cars that SP included as part of its sale of the Southern Pacific of Mexico railroad to the government of Mexico. Most cars of this type in that sale were from Class B-50-13, but some B-50-14s were included too.
These two classes of cars had single-sheathed sides and ends as built, but in the 1930s, nearly all of the Class B-50-14 cars were given Dreadnaught steel ends. This class, like B-50-13, had a range of roofs, including Chicago-Cleveland early “Viking,” Murphy radial, and Hutchins. All cars seem to have kept their wooden Camel doors all their lives. For more on class history, see my Volume 4, “Box Cars,” in the series Southern Pacific Freight Cars (Signature Press, revised edition, 2014). 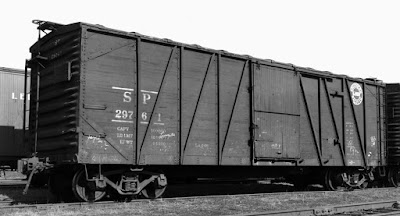 The photo above, taken at Ithaca, New York in 1950, shows a 26-year old car, still with its vertical-staff handbrake; note it has one T-section truck and one U-section truck (photographer unknown; Arnold Menke collection). Nearly all the cars got AB brakes during 1947–48 but only a minority were ever equipped with vertical-wheel geared handbrake equipment. These cars survived well until about 1950, but scrapping became extensive after that year.
The first step in a house car model like this is to assemble the basic box. Careful checking to make sure the sides are same length is essential, and dry-fitting of the roof to sides and ends, and likewise of the floor to sides and ends, is equally important so that the box will fit tightly. I assembled mine with CA, and here is is how it looked at this point. 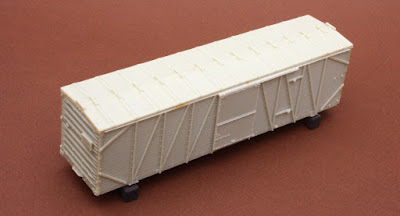 The next step is to apply details to the box. I chose to use parts other than the kit parts. I began with A-Line “Style A” sill steps and Westerfield scale 18-inch wire grab irons. I drilled holes and attached the grabs with CA, while the sill steps were attached with canopy glue — an adhesive that remains tough and flexible.
Next I applied brake gear to the underbody. I didn’t apply a train line, as that is invisible on the completed model, and only installed brake rodding, since piping also would be all but invisible. The K brake would have only survived on a minimum of cars by the sale of SP de M in 1951, but was exactly the kind of car that SP would have made surplus. Note that I have excessively angled the brake rods toward the trucks to avoid interference with truck rotation.

Very visible here are the “interim truck support blocks” which are installed until the car is painted.
Since nearly all these cars kept their vertical-staff handbrakes to the end, I decided to model the B end of the car that way. I had in my parts box a nice brake platform in brass (likely Cal-Scale), and I attached it to the proper end of the model. I then soldered a brass brake wheel to a length of 0.019-inch brass wire, and inserted the assembly into the brake platform parts and to a Tichy bottom stirrup Here is what the prototype looked like, shown at Car Shop 9, Sacramento General Shops, September 1934 (SP photo). 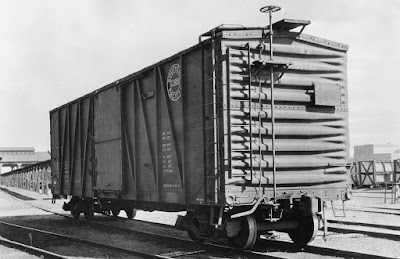 The car shown above has had a geared arrangement added at the end sill of the handbrake shaft, making it a power brake. Many cars, however, never received this upgrade. Shown below is the B end of my model, which can be compared to the photo above, but without the geared detail. Obviously I still need to add the retainer and ladder. 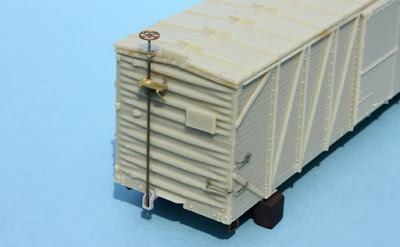 Completing the sides and ends with the ladders, installing coupleers, and building the running boards will be the next steps. I will address them in a following post.
Tony Thompson
Posted by Tony Thompson at 11:34 AM