Layout models and all that

There are a few on-line email discussion groups that I’ve belonged to for over 20 years. And one topic that comes up again and again is that of “layout models,” meaning something well short of museum quality, but still . . . kind of good . . . whatever that means. I’ve been reflecting on the topic recently, thus this post.
One aspect of this topic is the “freight car guy” perspective that I’ve written about in a pair of posts. Those posts are mostly about some car conversions for my friend Bill Kaufman’s layout, but they have a more general background than that one car fleet. Here are links to a couple of those posts:

But now I am turning to a somewhat more general topic, though referring back to those prior posts. The models I showed in those posts are not “totally accurate,” each falling short in some way. Each has some degree of compromise from strict prototype correctness.
Now I hasten to say that I have built competition models and entered them in the NMRA model contests, at both regional and national levels, and won some awards; I have judged in the NMRA contest at national and regional levels; and I was Contest Chair in Pacific Coast Region of NMRA for five years, supervising contests, recruiting and training judges, and overseeing judging at conventions. I think I have a fairly clear idea of what is meant by a “contest” model.
And even in that regime, there are models and there are models. Some years ago, my Pittsburgh friend, the late Larry Kline, scratchbuilt a War Emergency B&O hopper car in O scale, with all the wood sheathing parts made of wood and all other parts made of metal; and it had working hand brakes, so that rotating the brake wheel applied the brakes. It was a superb model, and it placed First in the Freight Car category at that year’s NMRA National Convention. Not every winning contest model goes that far, of course, but let’s not neglect that end of the spectrum.
Larry did have an extensive O scale layout, and would have been the first to tell you that he built no other models, zero, to the standard of that hopper car. It was a contest model, built mostly to prove to himself that he could do it. It was far beyond what even a craftsman like Larry would call a “layout model.”
That brings me to a point of contrast. Let’s imagine a layout operating session. I show below part of the cover photo from the July 1960 issue of Model Railroader magazine, showing Terry Walsh signaling to the engineer who is switching that reefer on Terry’s layout. (I used Terry’s track plan for his town of West Agony, shown in that issue, as the basis for the town of Ballard on my own layout.) 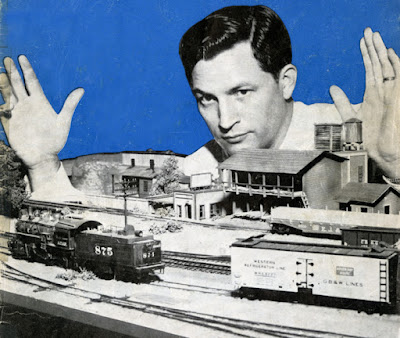 Now let’s consider rolling stock. Instead of thinking about Larry’s contest-winning B&O hopper car, let us imagine instead an Athearn 40-foot box car, unaltered, unweathered, and in fact right out of the “Blue Box,” lettered for, perhaps, Chicago & North Western. And further, imagine that this car is in an operating session, part of a local freight switching job. Does the conductor on the job examine the box car as a model? does he look at details such as the door “claws” or molded-on ladders or clunky running board? 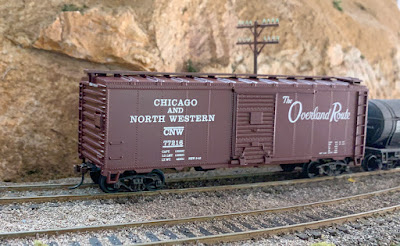 Of course he does not (even if perchance he’s a “freight car guy”) — he has a job to do. He looks at the car number, 77216, and the CNW reporting marks, notes that they match his switch list, and starts planning how to maneuver the car into the loading dock at Mammoth Manufacturing. That the car body represents a pre-war box car, and is numbered for a post-war car, matters not in the least, any more than the details did, or any more than the era-correctness of the lettering scheme on the model. He knows where that car is supposed to go, and he will get it there. As others have observed, the individual car in an operating session often plays very much the role of a player’s token in a board game.
So for our operating sessions, might we just as well run out-of-the-box Athearn rolling stock and call it a day? As with so  many things in modeling, I would repeat one of the oldest mantras in the hobby: every modeler does every part of the hobby to his own satisfaction.
I have indeed operated on beautifully scenicked layouts, on which the rolling stock was in fact totally out-of-the-box; and I have operated contest-quality rolling stock on “Plywood Pacific” layouts. Leaving aside the likely response of either layout owner, that “I haven’t gotten to that part yet,” these and many other levels of layout modeling can definitely yield a great deal of operating fun — regardless of freight car model quality.
The same amount of fun can be enjoyed, of course, by those building models just as individual models, with only the vaguest intention to populate a layout with them. So I guess my point would be this. Modeling of anything, from scenery to locomotives to structures to highway vehicles to freight cars, is always going to span a spectrum of results. Decide where you want to be, and do your best to get there. More on this later.
Tony Thompson
Posted by Tony Thompson at 10:12 AM