In a previous post, I mentioned my article in the July 2020 issue of Model Railroad Hobbyist or MRH, which was about railroad crossing signs, known as crossbucks. In that post, I included a photo of one of the three railroad crossings that I described in the article (you can view that post at this link: https://modelingthesp.blogspot.com/2020/07/my-latest-mrh-column-crossbucks.html ).
To give an another example of the “full crossing treatment,” as described in the MRH article, here is Nipomo Street in my layout town of Ballard, crossing the Santa Rosalia Branch. There are crossbucks on both sides of the array of tracks, as well as double stop lines and a vestigial center line painted on the pavement. (With any of these photos, you can click on the image to enlarge it if you wish.) 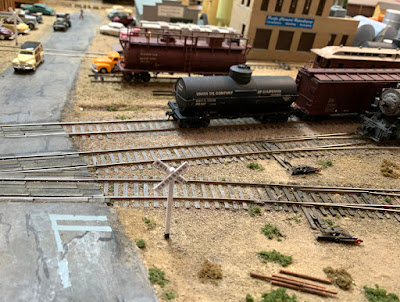 But my layout has additional railroad crossings, some with interesting complications, that go beyond the article. This post presents two of them, chosen because they include variations in the standard crossing arrangement, beyond just installing a pair of crossbucks. Both these additional crossings are in my layout town of Santa Rosalia, and involve roads near their end, and moreover, roads which only cross an industry spur.
I based my treatment of these crossings on historic photos I have examined, most from SP’s Coast Route, showing crossings of minor roads like these. The standard arrangement of pavement markings may be simplified or eliminated, and sometimes a crossbuck was replaced by an Advance Warning Sign (I showed examples of both of these situations in prototype photos in the MRH column cited in the first paragraph of the present post).
One of the Santa Rosalia crossings is Laguna Street, which crosses the industry spur and immediately becomes a dirt-surfaced entry to the team track area adjoining the depot.  It has a single-stripe “stop” line and a crossbuck, but no signage on the far side of the track, serving the team track. My assumption is that there is enough traffic to the team track to justify a crossbuck, but none on the far side for those returning from the team track. 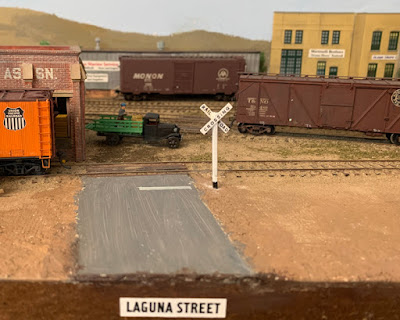 As I always do on my layout, the name of the street is shown on the layout fascia in the foreground. In the photo, there is a field truck unloading at Coastal Citrus, the structure at left in the photo. In the background at right is the fish cannery, Martinelli Brothers.
The second crossing is Corralitos Lane, an even more minor street, and it ends at the tracks, just beyond the Richfield bulk oil dealership at left (that’s Coastal Citrus at right). I showed the “road ends” sign and barrier in an earlier post (you can read it here: https://modelingthesp.blogspot.com/2018/07/more-on-road-signs.html ). For this crossing, I made no stop line at all, and only the Advance Warning Sign. 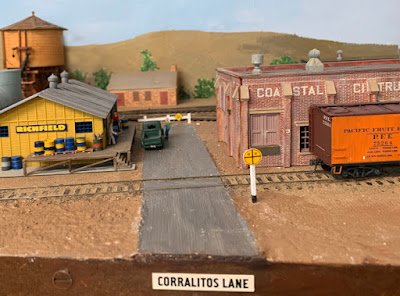 Though these two crossings have reduced warning signs and pavement markings, they are consistent with contemporary photos from my modeling era (1953) and with the photos in my MRH article, so I am confident they are prototypical. Now to finish the remaining crossings on my layout. Those with features beyond what I have already described will be shown in future posts.
Tony Thompson