John Signor’s books about Southern Pacific are the “gold standard” for many SP enthusiasts, and so it was great news that his long-gestating “mega-book” project, Los Angeles Division, was going to be published. John grew up in Southern California, and after he began working for SP in 1974, the Los Angeles area was one of the places he marked up.
This can only be described as a “really big book,” 584 pages in length, 8.5 x 11-inch pages, hardbound, weighing in at five and a half pounds, and including more than 1000 photographs and 76 maps. Even just browsing through it, it does “go on and on,” and I mean that in a good way. 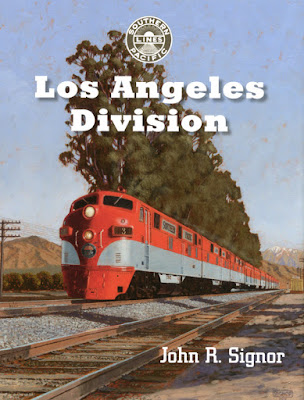 Published by the Southern Pacific Historical & Technical Society (1523 Howard Access Rd., Suite A, Upland, CA 917886-2582), the book is available through the Society’s website, https://sphts.org/ , priced at $80 plus $10 shipping for members. At the moment, the book is still shown as a member’s pre-order, but as soon as all existing pre-orders have been filled, the book will be available for general sale, probably at a price increase for non-members. But the book and its massive content of vivid historical material is a total bargain, and in the modern world of specialized books, actually rather cheap.
Signor fans will know that his SP books are always focused on a specific geographic place or area, such as (in this case) an entire division, and present the history from the 19th century until the descent into the Black Hole on September 11, 1996. John’s interest, beyond the considerable specifics of the geography of each subject, is operations, and this book is rich in operational details.
The book is divided into five large chapters. First is “Early Days, 1869–1900,” followed by “Expansion, 1900-1929,” then by “Depression & War, 1929–1945,” ”Postwar, 1946–1970,” and “Retrenchment, 1970–1996.” And though the material included in the book is indeed massive, in his Introduction John states that the amount on “the cutting room floor” is big enough for another volume as large. May we so blessed as to see that volume some day!
I know a lot about the SP, compared to many people, but I continually came across things in this book that I now understood more clearly, or even discovered for the first time. As an example of “understanding more clearly,” the 1947 LA map on pages 254 and 255 brought my nose to the page for many minutes. I reproduce part of it below to show its richness, depicting all the many yards and interchanges of SP, Santa Fe, Union Pacific, Pacific Electric and LA Junction Railway, but also the many instances of joint trackage among these railroads. (You can click on the image to enlarge it if you wish, though this image cannot do justice to what is in the book.) 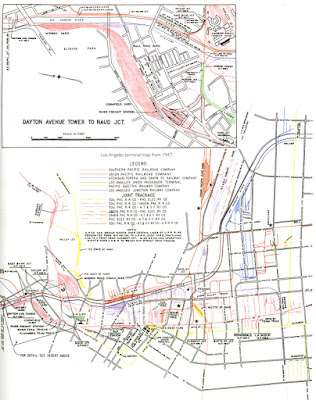 John has included some photos from his earlier books that touched on Los Angeles, from the Tehachapi and Beaumont Hill books, to the Coast Line volumes. This is entirely proper, so that all the best photography is in one place. But the great bulk of the photography here will be new to almost everyone, and there is gem after gem. Not every gem is major; I love the photo below (page 420), just because I had not seen a view of the Cornfield Yard at this angle, looking toward North Broadway (photo from the Jack Seeback collection). The locomotive is SP Consolidation 2531. 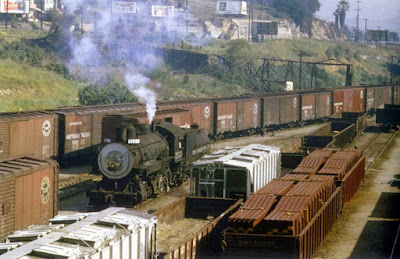 I will note in passing my mild surprise that there are a number of fine Richard Steinheimer photos from the Los Angeles area that John has not included, but doubtless they are among those mountains of material on the cutting room floor.
I will mention once more that the amount and detail of historical information here is just immense. Moreover, if operations is your topic of interest, you too will find a great deal of value here. And what not everyone may appreciate is how much information is included that forms the history of communities served by the SP. I would guess that many local historians, even if not railroad buffs, will also find this a rich treasure trove of information.
I am sure it’s obvious that I am not a neutral reviewer here, having not only known John for many years, but having handled production of a few of his books, and helped with others, when he published with Signature Press. Nevertheless, I want to emphasize that I am delighted to see this book, which I know is a labor of love, finally in print, and I hope it is a best-seller, for John’s sake, for the SPH&TS, and for SP fans everywhere.
Tony Thompson
Posted by Tony Thompson at 11:00 AM