In a previous post, I mentioned my article in the July 2020 issue of Model Railroad Hobbyist or MRH, which was about railroad crossing signs, known as crossbucks. In that post, I included a photo of one of the three railroad crossings that I described in the article (you can see that post here: https://modelingthesp.blogspot.com/2020/07/my-latest-mrh-column-crossbucks.html ). I followed that up by describing two railroad crossings in my town of Santa Rosalia, different in that they required less complete crossing protection (read that post at: https://modelingthesp.blogspot.com/2020/08/more-crossbuck-installations.html ).
But the layout has still other railroad crossings, beyond what I have already shown, and some have challenges in design. This post presents one of them, chosen because it involves a little more than just installing a pair of crossbucks.
One of those additional crossings is Alder Street in East Shumala on my layout. Alder St. passes between two industries, Caslon Printing and Phelan & Taylor Packing, and heads out of town. The two tracks that are crossed are sidings, and sometimes such crossings don’t receive crossbucks, but if Alder St. has much traffic, they should certainly be there. I will add them. 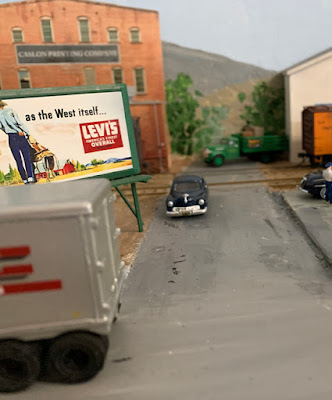 As you see below, Alder St. has an intersection with Pismo Dunes Road at the gas station (note street sign at corner). As you can see, the complication here is that the crossing is only a short distance from the intersection 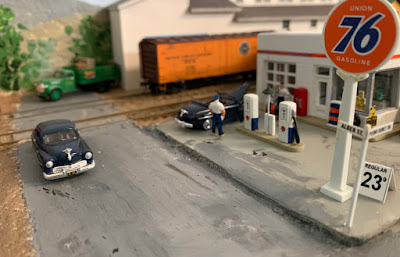 This short distance means that motorists don’t have much warning after turning the corner from Pismo Dunes Road. A crossing like this would be marked with an Advance Warning Sign if there were sufficient distance (100 feet minimum), but there is considerably less distance here than that.
The signage solution to this problem is a sign on Pismo Dunes to provide this warning. For an example of the prototype signage of this type, here is a sign alongside U.S. Highway 101, just north of Willits, California, and the railroad near the highway that is being protected is the Northwestern Pacific. 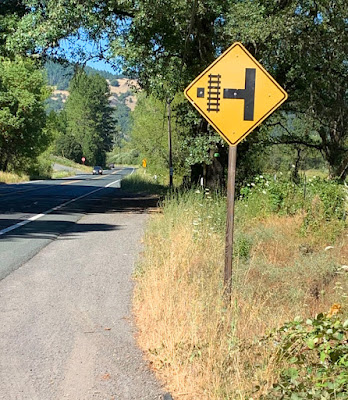 Such signs, of course, are made in both left-handed and right-handed versions. The one that I am going to use is right-handed (meaning protecting a right turn), as shown below. 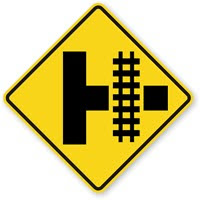 This sign was reduced to HO scale, printed out on a color laser printer, cut out and attached to a white post and placed on Pismo Dunes Road, visible as drivers would approach the intersection, though at a distance considerably compressed relative to what the prototype would do. This post looks kind of oversize, so may be replaced. 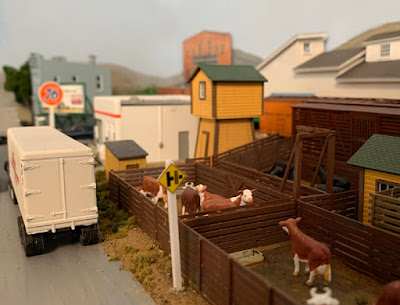 Then of course a pair of crossbucks, one each side of the tracks, is added on Alder Street. This street is imagined to extend some ways beyond the tracks, so both sides need warnings. Stop lines were also added on the pavement. (You can click on the image to enlarge it if you wish.) 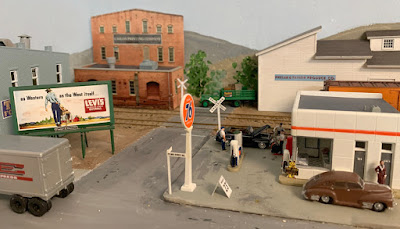 With these installations, my Alder Street crossing is properly protected. I have found it interesting to try and search out how the prototype handled situations like the ones we find on our layouts, and then to try and implement them. I have a couple more yet to do, and will touch on them in future posts.
Tony Thompson
Posted by Tony Thompson at 9:27 AM