My latest column in the series, “Getting Real,” has appeared in the July 2020 issue of Model Railroad Hobbyist, in the “Running Extra” segment of the magazine. (It is at: www.mrhmag.com .) It is about crossbucks at railroad crossings, and how I built some really sturdy brass ones for my layout. Once upon a time, I had installed some molded plastic ones, and they were soon broken off by careless elbows. My crossings have been crossbuck-less for some time, waiting for this brass modeling project.
As an SP modeler, I began with that railroad’s standard drawing for dimensions and lettering of crossbucks or, as the Southern Pacific called them, “highway crossing signs.” I addressed the SP design in a prior post (see it here: https://modelingthesp.blogspot.com/2013/03/streets-roads-and-all-that-part-2.html ), including the Common Standard no. 1320 drawing and a photo of an SP crossbuck. Those same materials are included in the MRH column.
[The C.S. 1320 drawing in the article is a 1970, update, by which time the signboards themselves had become aluminum plate. In 1953, when I model, these were all wood.]
It  may be useful here to reproduce the original C.S. 13 drawing, as in fact I did in an earlier post after Gene Deimling was kind enough to send me a copy (see that post at this link: https://modelingthesp.blogspot.com/2013/04/streets-roads-and-all-that-part-3.html ). The lettering on the post was dropped in the 1920s. 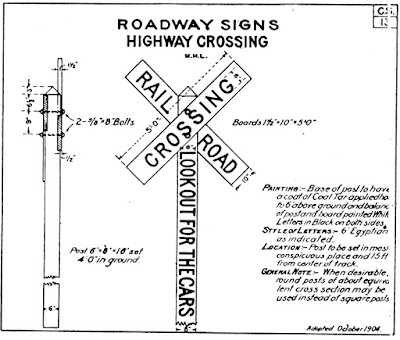 To summarize, the drawing calls for 6-inch square posts and 5-foot long blades, or 6-foot blades “where required by law.” The blades are nominally 2 x 10-inch boards.
What I described in the article was making a fixture to solder together posts of square brass tubing and brass strip for the blades (obviously intended to be real sturdy). These were then cleaned up, painted white, and lettered with a Microscale decal set. Shown below are an as-soldered model, and a completed one with paint and lettering. 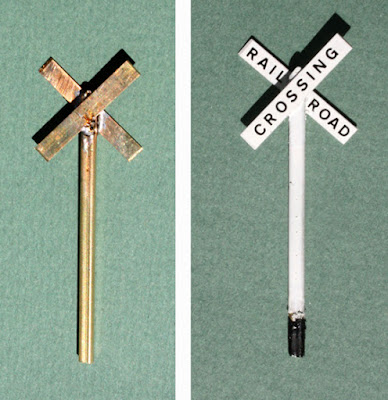 Installing these on the layout was simple, just involving drilling a hole for the tubing and inserting with canopy glue.
Here is one of the crossings now protected with crossbucks like these, Chamisal Road in my layout town of Shumala. The depot is at left, and the bridge over the road carries the Santa Rosalia Branch away from its Southern Pacific mainline junction at Shumala. Note on the near crossbuck that there is an added sign, warning of “3 tracks.” (You can click on the image to enlarge it if you wish.) 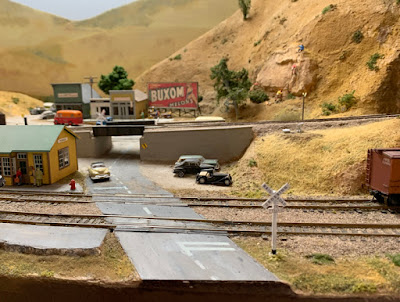 The dark edge n the foreground of this photo is the layout fascia, so this crossbuck is very near the layout edge. That is why I decided to build these crossbucks out of brass.
The above photo also shows the painted road markings at the crossing, another topic discussed at moderate length in the article, both as to existing highway standards and actual practices (in my case, in California). I showed how I applied these markings to my layout roads.
In the MRH article, I only described the application of crossbucks and road markings to three of the railroad crossings on my layout. But in fact the layout has several more, and I will address each of those additional crossings in future posts.
This has been an interesting project, and the crossbucks I built have already proved to be tougher than a grazing forearm! Whether they can hold up to a full operating crew, I guess is something I will find out one of these days. But they certainly improve the look of my road crossings.
Tony Thompson
Posted by Tony Thompson at 8:53 AM