I have just completed the weathering and other final touches on a resin tank car, and thought I would show it, with a brief description. The car was built from a Resin Car Works HO scale kit, in fact kit no. 1.02. This series of kits models the American Car & Foundry acid tank cars, about 390 cars built from 1929 to 1945 on essentially the same underframe. Cars were 7000 or 8000 gallons and had the distinctive 30-inch diameter acid domes.
Most of these cars were built for AC&F’s leasing subsidiary, Shippers Car Line (SHPX), and were so lettered, but some were built for sale to a variety of chemical companies and thus carried those companies’ reporting marks. The SHPX cars, of course, were in lease service to a variety of users, some of them the same companies that had bought cars of this type. Presumably the owned cars were for the core of traffic, and leasing allowed flexibility as demand fluctuated.
Shown below is a builder photo of one of these 7000-gallon acid cars, on a slightly earlier underframe (AC&F photo courtesy of Ed Kaminski). 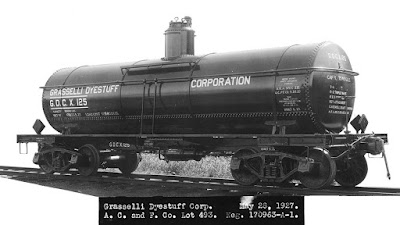 You can readily see the distinctive acid dome on this car. Acid cargoes were normally unloaded by suction up through the dome, rather than draining through a bottom outlet. The AAR code for cars without bottom outlets, a suffix letter “A” for acid, was extended to  many cars that did not carry acid but for various reasons were not equipped with bottom outlets.
Way back in January of 2012, an article of mine about modeling tank cars like this was published in Railroad Model Craftsman. I won’t go into what all was included, but I show below my model of a car like this, with a scratchbuilt tank on a shortened Tichy underframe, and pictured on my layout. 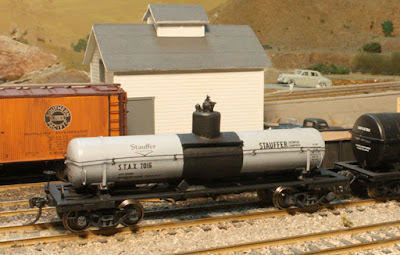 Since then, Tangent Scale Models has introduced a superb ready-to-run model of an acid car of this size, but a car of a later, welded design. I reviewed these models when they were first released (you can read my review comments here: https://modelingthesp.blogspot.com/2014/11/a-terrific-new-tank-car-model.html ). But for a riveted car, the available model is the Resin Car Works kit. As stated above, the kit models cars like the Consolidated Chemical Industries one shown below, reporting marks CCIX (AC&F photo, courtesy Ed Kaminski). 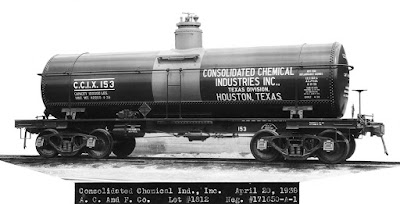 My particular kit, no. 1.02, was for a SHPX-leased car with a dome platform, also for service with Consolidated Chemical. Here is a photo of the prototype for that kit, from the ACF collection at Barriger National Railroad Library, courtesy Frank Hodina. 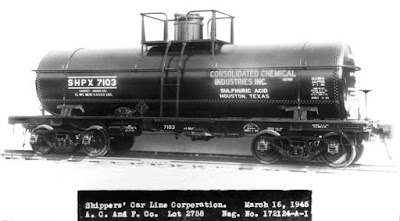 To my eye, the dome here is a slightly different color. It's known that Consolidated Chemical used colors like bronze green and dark red, as stripes or dome colors, for coding its cars, as you see above. For my model, I chose to use green. Here’s the result:

The model is lightly weathered, has a little spillage staining below the dome, and has both route cards and placards. I also added a few chalk marks.
This is an attractive model, partly because it is only 7000 gallons in size, and models a car from a chemical company less well known than the DuPonts and the Dows. My thanks to Frank Hodina for going after this project! I look forward to seeing it being switched in my next layout operating session.
Tony Thompson
Posted by Tony Thompson at 11:33 AM